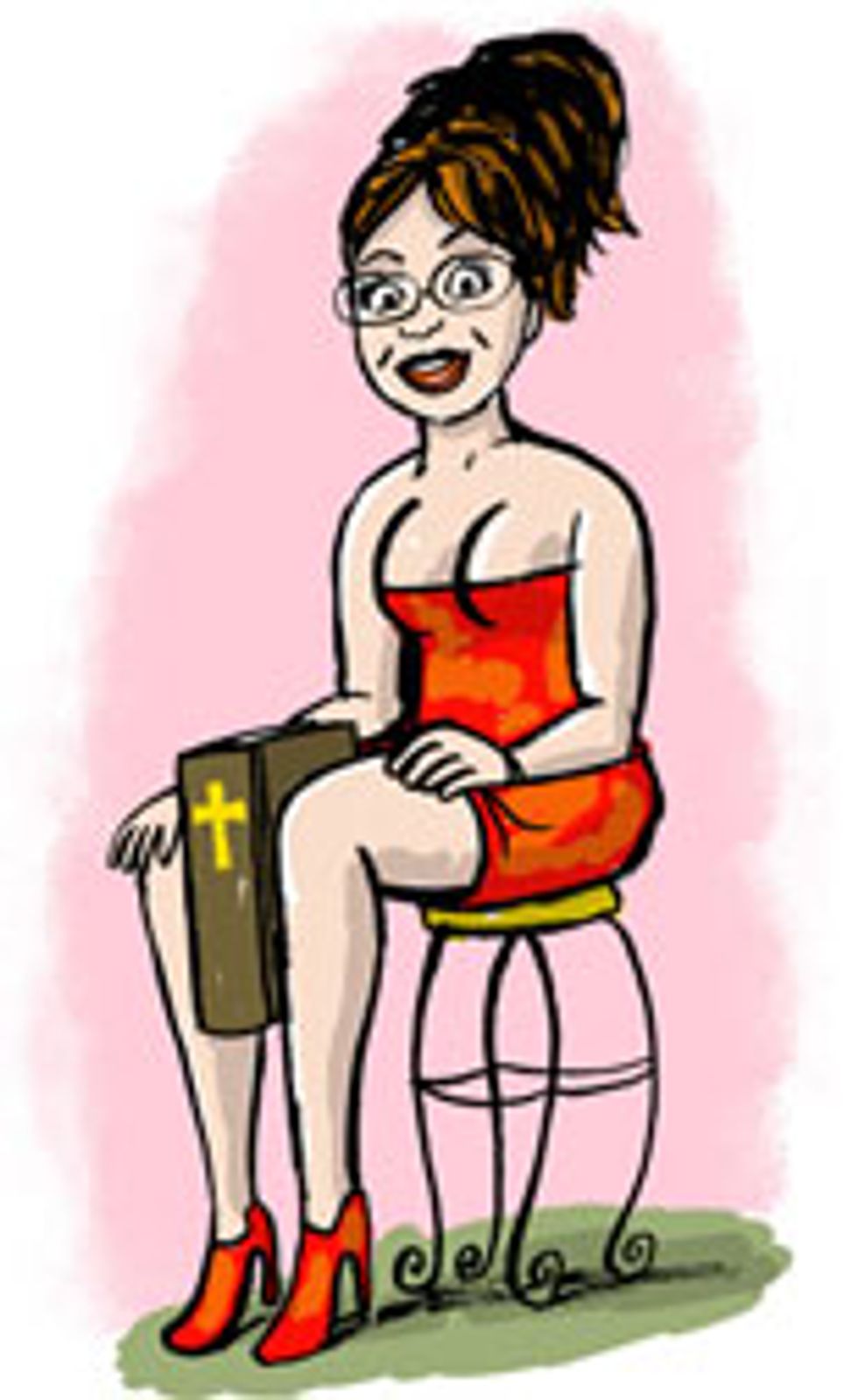 Tom Perotta has an analysis of the "Sexy Puritan" type that is used on the right to package a misogynist, puritanical, reactionary political movement, and how Sarah Palin fits right into it. If you've watched the right, you've probably noticed their weird love of pairing sexy women with ideas of purity---they prefer their sex objects to be of the "look but don't touch" variety.

Sexy Puritans engage in the culture war on two levels—not simply by advocating conservative positions on hot-button social issues but by embodying nonthreatening mainstream standards of female beauty and behavior at the same time. The net result is a paradox, a bit of cognitive dissonance very useful to the cultural right: You get a little thrill along with your traditional values, a wink along with the wagging finger. Somehow, you don't feel quite as much like a prig as you expected to.

Perotta mentions Britney Spears, but the "purity" fetish has gone mainstream in more ways than that. Pretty much any young starlet whose virginity has become a public fascination fits into this. If there's a sexist, objectifying way to look at women, look to the right to quadruple it and make it fucking creepy. Anti-choice groups that put on protests put the teenage girls up front, often with tape over their mouths to make the sexual fantasy even more perverse. Perotta noticed this, too.

I didn't think too much about Sexy Puritans as a type until I began looking into the abstinence-only sex-education movement while researching my novel, The Abstinence Teacher. I expected to encounter a lot of stern James Dobson-style scolds warning teenagers about the dangers of premarital sex—and there were a few of those—but what I found over and over again were thoughtful, attractive, downright sexy young women talking about their personal decision to remain pure until marriage. Erika Harold, Miss America of 2003 (the right sure loves beauty queens), is probably the best-known to the wider public, but no abstinence rally is complete without the testimony of a very pretty virgin in her early- to mid-20s. At a Silver Ring Thing event I attended in New Jersey in 2007, a slender young blond woman in tight jeans and a form-fitting T-shirt—she wouldn't have looked out of place at a frat kegger—bragged about all the college boys who'd tried and failed to talk her into their beds. She reveled in her ability to resist them, to stand alone until she'd found the perfect guy, the fiancé with whom she would soon share a lifetime full of amazing sex. While her explicit message was forceful and empowering—virginity is a form of strength and self-sufficiency—the implicit one was clear as well: Abstinence isn't just sour grapes for losers, a consolation prize for girls who can't get a date anyway.

That's going on, for sure, but I think mostly the whole charade is put on to prove to the men whose opinions all this eventually caters to that they're right. The abstinence-only movement is fundamentally about sexist male fears of female sexuality, and getting women under control. And the fear of female sexuality is tied closely with fears of death and decay. What comes out of this stew of fear is the belief that sexual activity literally decays women. We see that cultural fear writ large on the body of Britney Spears, who is presumed to be falling apart more and more with the volume and diversity of sperm she encounters. Again, these fears are just amplified on the right, where feminists are simultaneously derided for being both over-sexed and so ugly as to be unable to attract a man. Logical people see this as a contradiction, but for them, it makes perfect sense. Think about the exercises in abstinence-only classes---taking out a toothbrush, chewing gum, or otherwise using an object that becomes unusable through use. Women are in this category of objects---they're better fresh out of the package. The virgin is sexier because she is a virgin.

So sexy virgins are paraded around as fantasy objects for the men. Sarah Palin is sort of the same fantasy, phase II. The virgin is the sexiest thing of all, but next of course is the woman that is "used" only by one man. I have no idea how many sex partners Palin has had, nor do I really care, but I guarantee you that most of her hard right fans think the number is 1. That's what they're telling themselves about her pregnant daughter, too. Again, they may be right or may not, but what's true is less relevant than what's believed. They're firm believers in the myth of the banged-out slut. Women like Palin are wielded to shame the rest of female humanity for being those banged-out sluts. It's fucking weird that being the Perfect Wife is considered a qualification for Vice President now, but really, it's perfect evidence that, for a lot of Americans, they aren't hiring someone for the job they're actually doing (being President), but as a "We're Better Than You!" moment of telling their fellow Americans to fuck off. Lovely, no?