[youtube http://www.youtube.com/v/0UKtZwWLMp8&hl=en&fs=1 expand=1]Okay, I've been teasing people on Twitter about this on and off, but for some reason, it took a little over a week for them to heal completely (I think it has something to do with how the artist digs the needles in to get the color really good), but Friday night is a good time for a light-hearted post anyway. So here's my new tattoos!

I got the idea for them at the Devo concert, after watching all the people with Devo tattoos walk by and getting Devo tattoo envy. It comes as no surprise to anyone that Devo is my favorite band, because their music is amazing. But more than that, they have an aggressively geeky pose that is more punk than most punk rock, and of course, because the entire band is built around the concept of "de-evolution". It's both a denunciation and a celebration of conformity, the tendency of people to shut down their brains, materialism, and other problems with the herd mentality. In all honesty, explaining the concept of "devo" to people is like trying to describe porn. Seeing Devo at a concert hall is not especially devo, but seeing them at a horsetrack totally was. Agreed with Gavin---John Lydon doing butter commercials is so punk rock, because it's so devo. Because it's hard, Devo fans who get it tend to seek each other out and geek out together.

I settled on tattoos illustrating the song above "Smart Patrol/Mr. DNA", because it's a song that plays with these ideas, but it's in the form of a very silly comic book story that doesn't take itself seriously at all. More importantly, it rocks like a motherfucker. It's probably my favorite Devo song. I like to put it on for people who have their guards down and haven't considered what an awesome band Devo is, because the increasing intensity of the song tends to blow their minds. So they're under the fold. Right arm representing for those inevitable losers, the Smart Patrol: 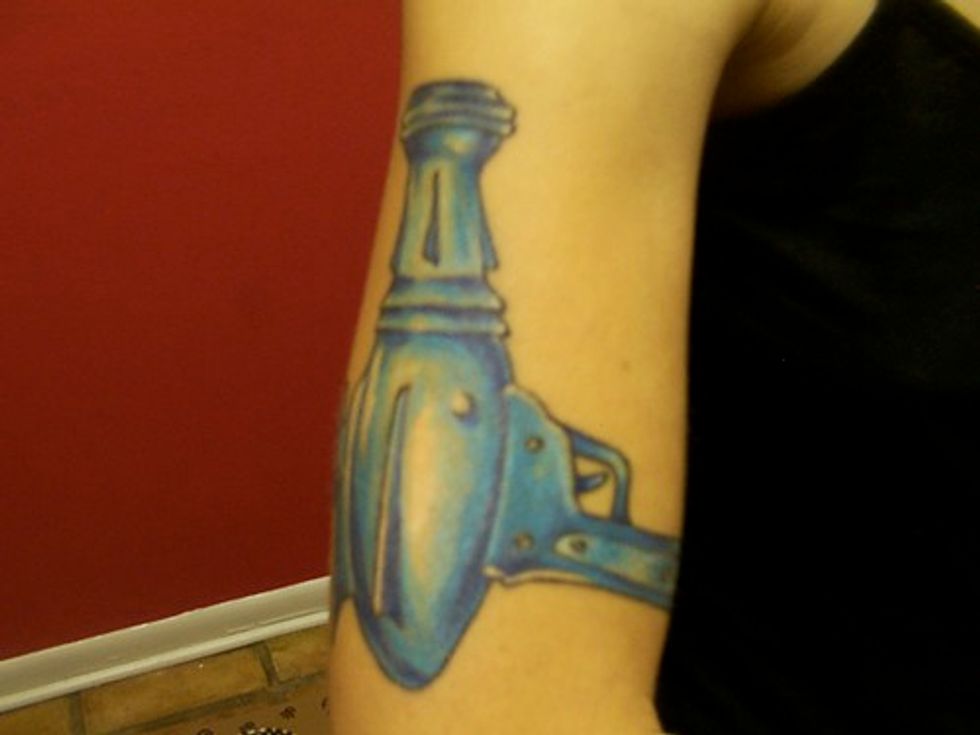 And the left arm represents the inevitable winner Mr. DNA: 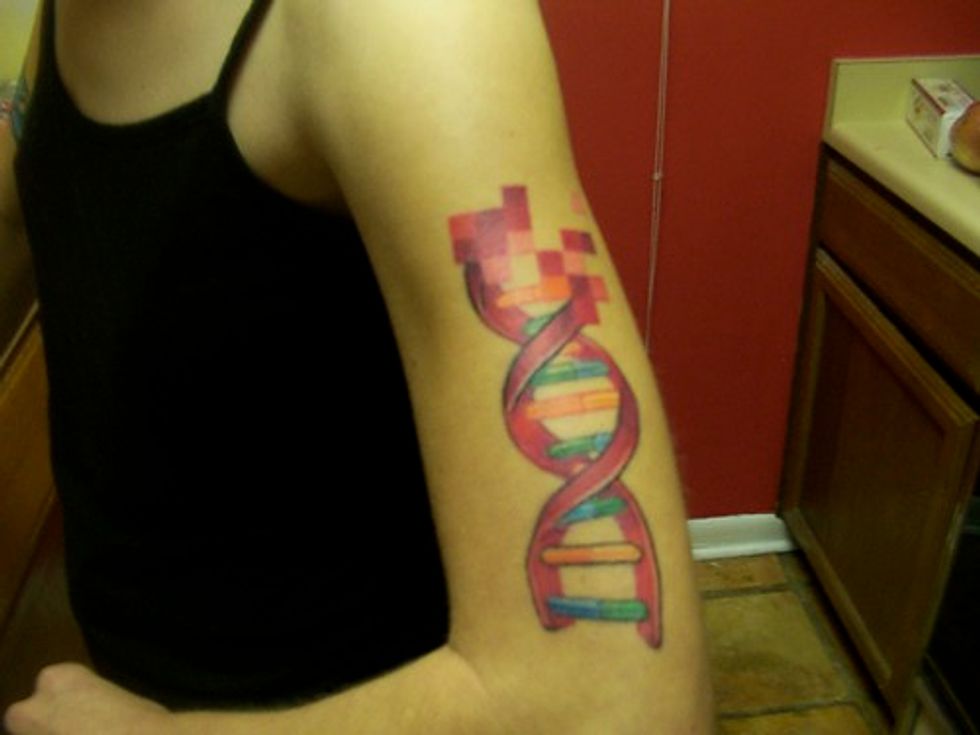 Lyrics, with a few footnotes for people who don't get Devo. Don't know how much it'll help, but this sort of thing got me through freshman English lit.

he's been with the world

and i'm tired of the soup du jour

he's been with the world

i wanna end this prophylactic tour1

afraid nobody around here

guess i'm only a spudboy2

looking for a real tomato3

we work around the clock

we shove the poles in the holes4

he's the man from the past

he's here to do us a favor

it's just supply and demand

he's here to spread some genes

he's a man with a plan

his finger is pointed at devo

now we must sacrifice ourselves

that many others may live

ok we've got a lot to give

this monkey wants a word with you6

2) "Spudboy" is a term for an unthinking person, likely a conformist. In the lyrical world of Devo, spudboys are treated with surprising ambivalence. There's the knee-jerk contempt, but there's also envy and understanding. In a sense, being a spudboy is a wiser choice at times, due to resistance being futile. Sometimes being a spudboy is inevitable. Often, spudboys suck, though, and this is especially true when you get political.

3) Sexual desire is the favorite Devo example of how the animal side of humanity will always trump rationality, for better or for worse.

4) Don't take the corny jokes in Devo songs as face value. They are injected because part of Devo is delighting in this sort of thing. Unfortunately, the otherwise perfect first album "Are We Not Men? We Are Devo" had the exclamation, "What's round on the ends and high in the middle? O-HI-O!" taken out of the song "Jocko Homo". But it's in pretty much every other recording.

5) Jokes that borrow phrasing from biology are deliberately shallow. They're not trying to write a scientific treatise here.

6) It's a form of egotism that causes human beings---who shit, fart, fuck, pick our nose, and would eat our food with our hands if we could get away with it---to believe that we're not just another form of primate. Devo loves punching holes in our belief that we're not monkeys. That creationism has not disappeared, but has instead gained in prominence since Devo first started recording just makes this aspect of their lyrics even funnier.