Wanda Sykes and the end of certain euphemisms

Very cool: The passage of Prop 8 has given Wanda Sykes to dig in and start speaking out against it.

"You know, I don't really talk about my sexual orientation," the Emmy Award winner said. "I didn't feel like I had to. I was just living my life, not necessarily in the closet, but I was living my life,""Everybody that knows me personally they know I'm gay," she continued. "But that's the way people should be able to live their lives."

The motivation behind the revelation: the Nov. 4 passage of a same-sex marriage ban in California that has took the nation by storm.

Sykes aid the ban (also known as California's Proposition 8) made her feel like she was "attacked."

I'll confess I was a bit surprised by this, because Sykes jokes about men in her stand-up act, and because the character she plays on "Curb Your Enthusiasm" is straight. Now, I know not to take actors who play themselves on the show at face value. The joke about Sykes on the show is that she loathes Larry David and that she only tolerates him because she's friends with his wife, and I suspect that's not true in real life. But they generally don't play too loose with the facts when it comes to the actors' real lives on the show. Ted Danson really is married to Mary Steenburgen. Cheryl David is a thinly disguised version of Laurie David.* So I just assumed that the way they played Sykes' private life---that she's single and straight---was real. My mistake. She's right to say that it shouldn't be a big deal any way you slice it. I long for the day when someone's sexual orientation, marital status, etc. is regarded like their eye color---interesting, but not a big deal unless you personally have a sexual interest in them. But the passage of Prop 8 shows that's a luxury people can't really afford right now. Having celebrities come out of the closet is a big boost, I think, because it allows people to quit thinking of "gay" as this amorphous threat and starts them on the road of thinking that "gay" describes actual human beings with feelings and lives, many of whom you already have a lot of regard for. Now, I don't know if Sykes will have that effect. I suspect that people inclined to homophobia are already put off by Sykes, who flouts a lot of femininity standards, with having a demure demeanor at the top of the list.

According to Wikipedia, Sykes married her wife on October 25th, which means she's one of the direct victims of Prop 8, who had her marriage dissolved against her and her wife's will.

One thing I think that shows the tide is turning on this gay marriage thing is that the discourse after Prop 8 has settled the question of whether or not this is about homobigotry or protecting "traditional" marriage. Pretty much no one buys the latter excuse anymore. Or the notion that gay marriage deprives children of a mother and a father, as if one father is kicked out of a household every time a gay couple gets married. Euphemisms invariably change over time to mean the thing they were politely covering up. "Toilet" used to be a euphemism, as was the word "retarded". Not anymore. Same thing has happened to the expression "protecting traditional marriage". It's no longer effective as a euphemism, and is taken to be a figure of speech to express blatant homobigotry. The debate is being held more and more in an honest space. Like these fuckheads that Samhita took a picture of who were counter-protesting a Prop 8 protest. 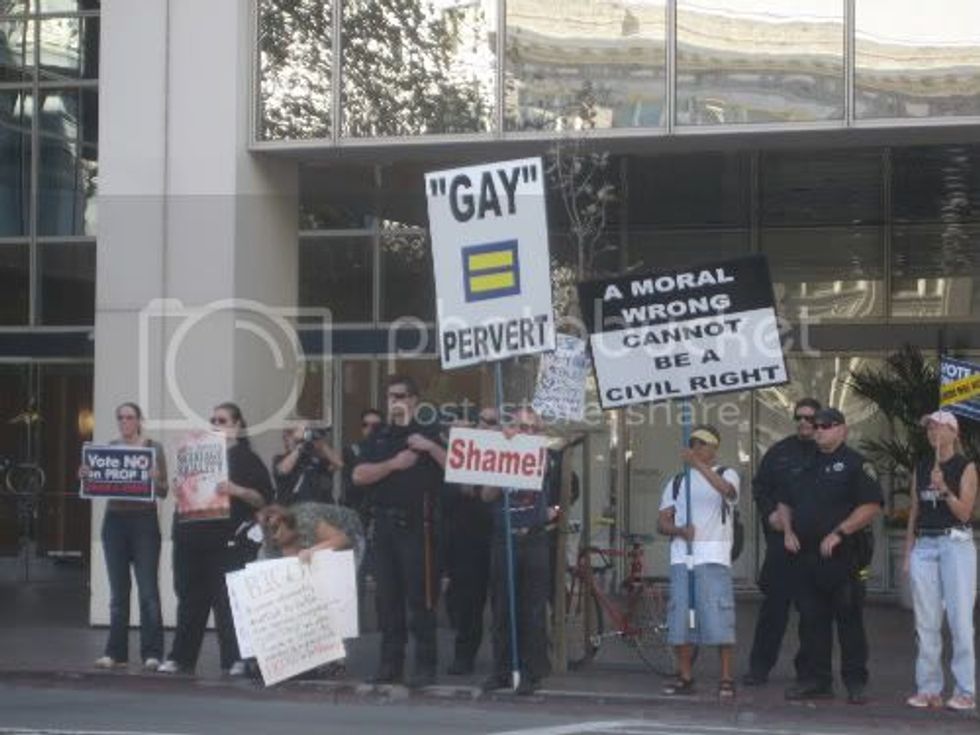 No fake mantles of victimization, just straight up hate. It's good that the ugliness is coming out into the open. That's going to make it a lot harder for people who sympathize with the homobigot side to keep lying to themselves about whether or not they're good people. Not as long as they're siding with these assholes they're not.

*Of course, the real life Davids have kids, whereas the fictional ones seem to avoid having children because they're too dysfunctional to add children to the mix.