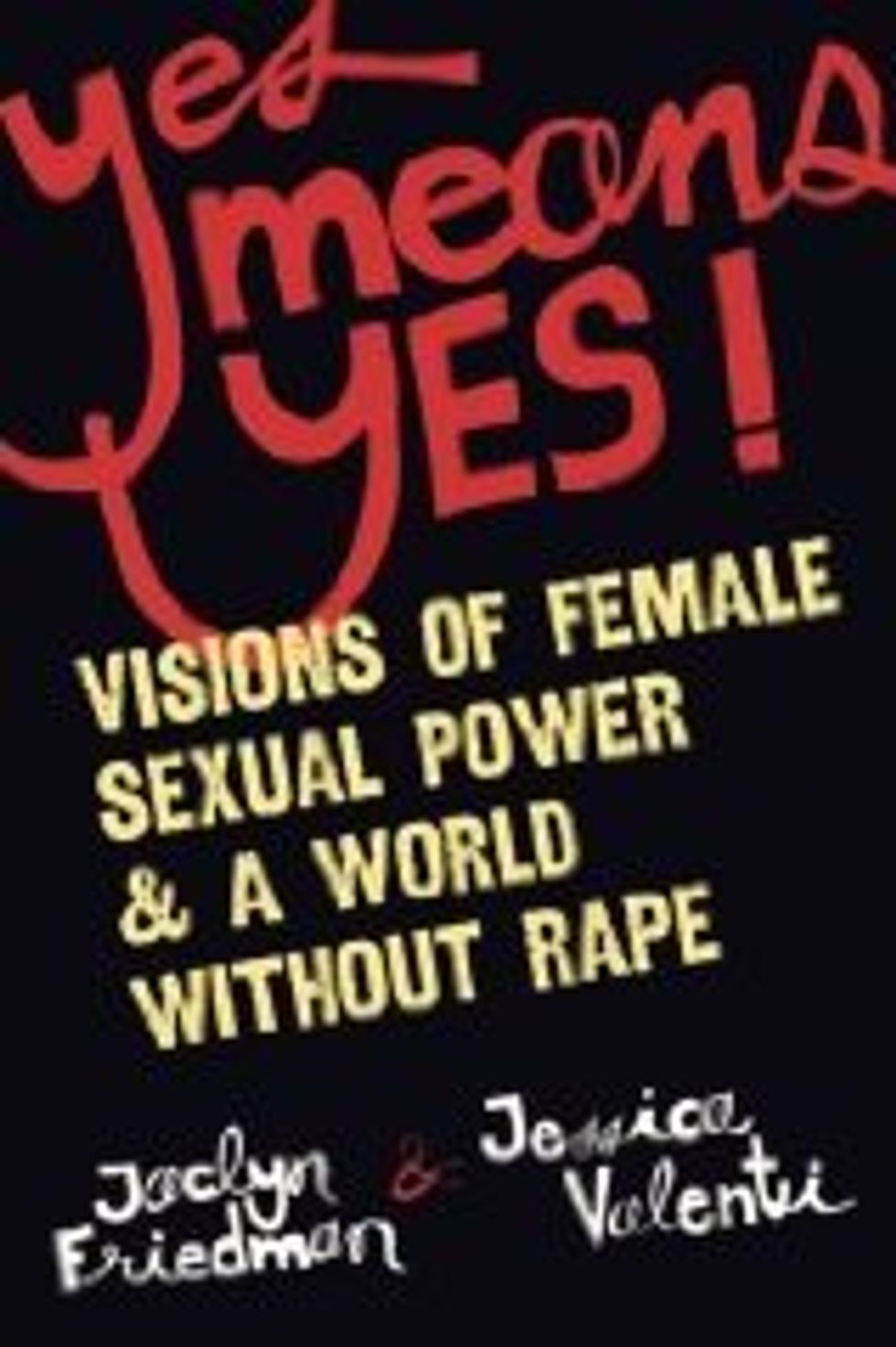 If you read Savage Love this week, no doubt you were as haunted as I was by the letter written by an 18-year-old rape victim who is being re-victimized by the rape culture. Haunted, because her story is so common as to be mundane: Her ex-boyfriend rapes her, but of course, it's "gray", not because he didn't rape her, but because we allow men to rape under some circumstances by politely calling it something it's not. Perhaps we would like to see it as "seduction", or even badgering someone into sex, but if we look at it honestly, what happened was he made it clear that her choices were to "consent" to sex quietly or be raped more roughly. It's not consent if you're told that you consent or else, even if that message is conveyed non-verbally by showing force, as this young man did. (And I disagree with Dan---I think, depending on where she lives, she has a case. Lawyers in the audience?) But because we live in a rape culture (definition for those who are confused about this term), she's not getting support and sympathy, much less justice. Her current boyfriend is blaming her for "cheating", which is like blaming your significant other for overdraft when your house has been burglarized. She's in a swirl of self-doubt and self-hatred, even though she should be proud of herself for doing what she had to in order to get through the encounter with minimal damage to herself. Like Dan says, in our fucked up system, she doesn't have much of a chance to get justice, because we live in a culture that condones aggressive behavior to "get some" from men, including badgering, guilt trips, misrepresenting yourself, and other forms of light coercion that fall short of legally defined rape. And because of this, men who cross the line from, as in this case, mere badgering to making it clear to their victim that her options are non-injurious or potentially injurious rape, and when that happens, we end up condoning that as well, straining to give the attacker the benefit of the doubt, saying he just overdid it out of passion, and ignoring that he was on a power trip. And that these power trips are far more common than we'd like to admit, and they're a factor even in many uncomfortable encounters that aren't legal rape, but are still forms of coercion. (Margaret Cho explains: "Often I would initiate the encounter just to get it over with, so it would be behind me, so it would be done. It is the worst feeling; it is like emotional prostitution, emotional whoring. You don’t get paid in dollars, you get paid in averted arguments.")

Why do we tolerate a culture where, even if rape is technically illegal, the assumption that men are predators and women are prey goes mostly unchallenged? In no small part, it's because we construct women as the "no-sex" class, to borrow Figleaf's phrase, which means, depending on the situation, that women are considered non-desiring people or that women may have desires, but they shouldn't and they feel ashamed of it. (Which is the belief that drives the idea that rape doesn't really happen so much as women give in, and feeling like the horrible sluts they are, make up rape the next day in order to preserve their reputations. This belief is stupid on its surface, because being a known rape victim is much more isolating than just being considered easy.) And it's this problem that is the central question of the new anthology Yes Means Yes: Visions of Female Sexual Power and A World Without Rape. It's a series of essays looking at rape and sex from different angles, but all circling around this one idea, which is, "If we began to imagine that sex is something that happens because every party involved is burning with desire, instead of something that one person gives up reluctantly to another as a token for love or even just to get him to shut up, then that would make it easier for people to see rape for what it is, and it would make rape that much harder to excuse or rationalize away."

To make this very clear, I don't think anyone involved with the project is saying that rapists themselves are that confused about their behavior. I interviewed co-editor Jaclyn Friedman about this last week (you can hear it here; I think it's a really good interview, with all credit to Jaclyn for being awesome), and she made the point well. Men who rape have their own issues,* and no one is suggesting that a little more belief in female desire will fix them. But what can be changed is a culture that coddles rape. If we can shift the paradigm from one where sex is something men want and women give to one where it's seen as a collaboration, we would start to see any level of coercion as unacceptable, and rapists couldn't get away with hiding in the "gray" area between pressure and force. (I wrote a really long post a long time, suggesting that the conservative view of sex is that it's a competition, and the liberal one is that it's a collaboration, the difference between basketball and playing in a band, for instance. It seems to have disappeared in our server changes, but tigtog quoted it extensively.) Reading this anthology, I'm more convinced than ever that this pleasure-affirming view of women would have many more benefits than just making it harder to get away with rape. It would mean that reproductive rights were unassailable, and that domestic violence would also be harder to get away with, as people moved away from viewing women in heterosexual relationships as being essentially servile. It would make relationships between men and women more fun for everyone involved, because you'd be partners in crime instead of stuck in a tense relationship where each one is trying to get something out of it at the other's expense. It would make homophobia even more nonsensical, because if sex is about pleasure, and pleasure is good, then trying to define some pleasures as bad on the arbitrary nature of how the genitals fit together makes no sense at all.

The essays attack the problem from a lot of different angles, so if you think it's going to be a hard read because it's such an emotionally draining topic, think again. There are a lot of really sad pieces about the effects of rape culture, including Latoya Peterson's eye-opening essay "The Not-Rape Epidemic". But there's a lot of fun pieces that touch on the positive side of pleasure affirmation, such as Heather Corinna's imaginative piece about what a world that really honored female sexuality would be like (short answer: the sex would be a lot hotter) and Hanne Blank's inspiring piece defending the right of women to define virginity for themselves. There's a minimal amount of grating writing (two essays, at the most) in the pseudo-scientific hippienik vein, a surprising feat since sexual assault discussions have a component of talk about healing, and once that word is introduced, hippienik language is pretty much inevitable. (Seriously, fantasies of kneecap-breaking helped me heal post-assault a lot faster that waggling crystals at my chakras ever could.) There's essays that might be about dark subjects, but are still wildly readable because they're so funny, like Kate Harding's piece about how the "rape is a compliment" fallacy is used frequently to both attack fat women and minimize the violent reality of rape. Lee Jacob Riggs talks about the anti-rape component of working in a feminist sex toy shop, which was fun. The only essay that made me want to put down the book and post critically about it was Stacey May Fowles apology for female sexual submissives, and not because she's wrong to defend them, but because the essay pointedly ignores the real source of feminist discomfort, which is male sadism that finds an outlet in BDSM. I want someone to write that essay, especially since there's a tendency in feminist writing to spend all our attention on female behavior while ignoring male behavior, which reflects mainstream tendencies that make rape apology seem so natural. (After all, the attention is all on why she wore that skirt/attended that party/went on that date and not on why he raped.)

What's really great about this book is that it's so readable, and so it's a perfect book to hand off to someone who wants to know more about feminist thinking about the rape culture, but who is easily spooked by radical feminists who've been thoroughly demonized, like Andrea Dworkin. You can't condemn this book as being "anti-sex" when it's anti-rape, which is a common tactic for rape apologists. In reality, as this book demonstrates beautifully, our rape-coddling culture is the one that's anti-sex. Radically reinventing sex so that it's a collaboration instead of a conquest isn't bad for sex. You don't really know how good it can be until you've had it in circumstances where everyone involved feels safe and free.

*I suspect, from my own experiences, the experiences of other victims I've talked to, what I've read, and what kind of violent imagery and rhetoric gets passed around your more misogynist circles, that most rapists are simply bullies who feel powerful when they terrorize women. They may eroticize it or they may not, but their main aim is a sadistic desire to dominate. It's really not that complicated. That said, I could write volumes about how masculinity is constructed in our culture in such a way as to breed rapists, because so many men think to be men at all, they have to be domineering, and rape is a quick fix for that desire, especially if you're angry at women as a group for making your feel vulnerable.