Ann Coulter has a new book out, which means she's going to get invited onto all the political talk shows so she can be an asshole and piss everyone off, which means it's time for another round of liberal blogosphere hand-wringing over how to fix this massive cancer on the political discourse. Paul the Spud sums up the meta-discussion:

Of course, we'll have the usual outrage when she inevitably says something incredibly offensive, lefty bloggers will protest (and their commenters will tell them to "just ignore her"), righty bloggers will cheer (and their commenters will take Coulter's statements to higher extremes), and then the book will be remaindered. And then we'll all have a few months of peace until the next "book."

As anyone who has been bullied knows, the advice to merely ignore the bully doesn't work. But fighting back against the bully doesn't work, either. The point of being a bully is the cheap and childish thrill of being able to frustrate other people just for the sheer hell of it. That's why bullies are attracted to the defenseless as targets; because the powerful can in fact shut your ass down. This is why the natural political leaning of bullies is to the right---you get the pleasure of picking on people and feeling powerful and daring while simultaneously sucking up to the rich and powerful that could actually hurt you if you crossed them. It's cowardly, of course, but it's the worst kind of cowardly, because it's about getting off on conflict, but never actually taking on any real risks. This is why comparing caustic liberals like Ted Rall or even myself to Coulter is fucking stupid---enemies like the Catholic hierarchy, the patriotism bullies, and other powerful constituencies can actually fuck you up and do. There's a real risk to criticizing power. Ann Coulter is the Cartman of politics.

As you no doubt know, Coulter has resorted to going after divorced mothers, and there's actual joking that this might bite her in the ass. Of course it won't---women are the ideal target at all points in time for this shit. Coulter's audience is almost completely composed of belligerent, anti-social, broken white men who lack basic human empathy, and so for them, the category of "women" is a category of carbon-based life forms whose value is strictly functional. Even for divorced men of this category, divorced women make a great scapegoat. Either she initiated the divorce, meaning you can impugn her for not working properly and submissively like you would a lemon you bought, or you dumped her and well, actually the same thing. Coulter is just endearing herself to her sociopathic audience. The only group she could cross, really, is the straight white guys who eat this hate up. I have no doubt in my mind that she's more popular than other writers pushing this same "every single human being that is not a straight white guy with major issues is subhuman" schtick because she's female. Shows that even the true believers don't really believe it. They need a woman to affirm their hate, because there's some guilt deep down inside that's triggered when you say, see a woman stub her toe and you have a moment of empathy that makes your feel weak and emasculated. That nagging belief that maybe women aren't so terrible after all, that is. And by getting a woman to say, "Nope, women are evil and really should be thanking you for not kicking them randomly," makes all the difference.

But random asshole behavior seems increasingly to be the, um, "argument" for conservatism. I took a random screenshot at Townhall today to show what I mean: 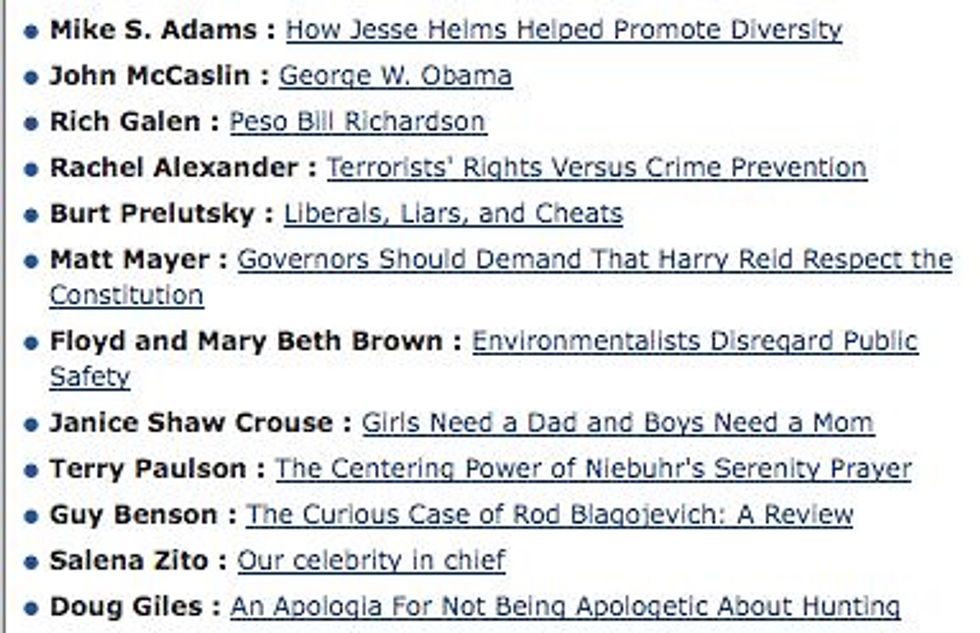 So, you have some pointless racism from Mike Adams, and Doug Giles continuing his crusade to suggest that your penis actually shrivels up and falls off if you have a single pang of kindness in your heart. It's not enough to shoot animals, you know. They should make it legal to shoot people who have qualms about shooting animals, at least with a full blast of birdshot to the face, so long as you get to jerk off and spooge on their wounds while they whine for help. And the usual smattering of "irritate the emasculating liberals" half-literate bullshit that goes on there.

I'm a fan of burning people, and so my qualms about this stuff isn't exactly that random acts of meanness are somehow the worst thing in the world. It's the lack of dignity and art to it. It's cowardly to pick on the powerless, first of all. Plus, it's just embarrassing how bad most of it is. Coulter's stripper joke is aesthetically offensive, because she stole it from Chris Rock, and it's not nearly as well-played as his. She calls children of divorce "future strippers", but Rock tries to put some art into it, saying that it's a dad's job to keep his daughter off the pole. See what I mean? The latter is a pretty good burn. Coulter's joke is the sort of thing that makes people with no sense of humor laugh. Like, if I heard someone laugh at that, I'd never let them pick a movie, because you know you're seeing something starring a dog or perhaps a talking baby.

And she's the funniest of the lot. Mike Adams and Doug Giles are excruciating examples of one of the most undignified things that male privilege does to some men, which is causes them to think they're funny when they're not. Men like that coast through life with women and even other men indulging every lame joke with faked laughter. In fact, it's been noted by researchers that laughter functions as much as a sign of social submission as a sign of merriment---we laugh to make other people feel easier, and so social subordinates laugh a lot more than social superiors, to butter up their superiors. Which means that these two, a college professor and a minister, are used to gales upon gales of unearned laughter that has led them to believe they are funny. It's profoundly sad. But also, kind of funny, in a way that creates perhaps the only genuine laughter these men may see.

Of course, none of these musings gets us any closer to what we're going to do about Coulter? Boycott? Write letters? Ignore her? Accept that she's part of the landscape? The last one might have to be the realistic option, but it's certainly unpleasant to ponder.