So I was tipped off by a nice saleslady many months ago about a biannual event called Le Garage Sale, where all the local boutique shops unload their sales merchandise with deep discounts at the Palmer Events Center, and I was determined to make this a regular thing for myself. It accomplishes three very important goals:

3) Not breaking the bank

You should go, too, if you live in Austin, though if you're really cheap, I suggest going on the second day (which is today), when they get really desperate not to haul anything back to the store and cut prices even more. Men: You do even better than women, because you don't have as much competition for the good deals. Marc made out like a bandit.

Anyway, our haste towards the Palmer Events Center was impeded by this bit of haterade: 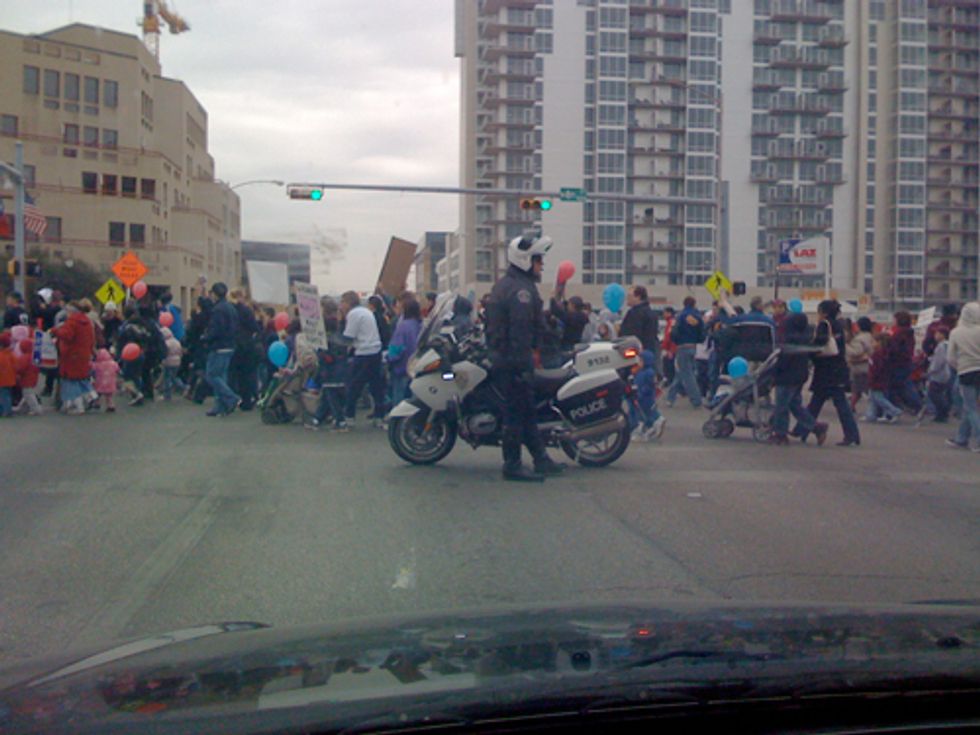 As we were driving up to the stoplight by Republic Square and saw the crowd with placards, we were initially happy, since most placard-wavers in Austin are on the side of the angels, and with the recent election, we had to assume it was a crowd pushing for a swifter end to human rights abuses or a better economic stimulus package or something like that. But no. As you can probably tell from the number of strollers being pushed with self-righteous smugness, this was an anti-choice rally. And unfortunately for us, we pulled up right as they were about to march. The cops stopped us from going forward and saw the understandable disgust and anger written on the faces of people stopped in traffic because of this, and so did something that rarely happens: They got off their motorcycles to talk to us. They apologized for the delay and assured us that they'd be out of our way in no time.

Thankfully, it was a pretty tiny protest compared to most, and we didn't have to wait long for them all to cross, though the fact that the crowd was at least 30% small children didn't help them move faster. This is Austin, after all, and we don't inculcate the levels of intolerance it takes to compel someone to stand out in the cold protesting women who break with "god"-ordained submissive gender roles. Even if you were uptight when you moved here, routine exposure to gutter punks, elaborate graffiti, bicyclists, loud parties, live music, hipsters, hippies, gay couples who don't hide themselves in public, happy-go-lucky women who don't wear make-up, and stoners spacing out in front of you in line at the store will make you realize that the world does not actually come to a screeching halt if people are permitted to be themselves without being harassed about it. Subsequently, worrying about what people do in private that doesn't affect you at all makes even less sense. Then again, we are surrounded by suburbs that people flee to because they really can't face up to living in an urban environment that will make them realize that intolerance is a waste of energy, so I'm guessing that's where most of our anti-choice protesting wankers came from.

All of which means that I, as a privileged white woman living in a liberal town that prizes instead of protests its uppity ladies, don't have much opportunity to be faced with raw fear and loathing of myself as a human being. Being stuck in traffic watching people protest the existence of yourself---i.e., someone whose life hasn't been constrained by mandatory unwanted child-bearing---was unnerving. Marc sympathized, but upon reflection, he was being protested as well, because the determined stroller-pushing haters don't particularly support the rights of men who also take advantage of relaxed gender roles, such as those who like to partner with uppity ladies. I didn't think they'd like it very much if people like us showed up in front of their churches holding up signs protesting the right to get married and shuttle 3 or 4 kids around in an SUV with a smug but pained look on your face while your marriage disintegrates because your belief that men and women have nothing in common but sex and children makes it increasingly hard for you to tolerate each other. And why don't we protest, despite the obvious judgment I'm laying on them? Because, believe it or not, it is possible to choose one way of living without spending all your energy being angry that someone takes another route, or actively trying to stop their free choices. Though, I suppose it's easier to tolerate the choices of others when your own choices aren't soul-sucking, tedious ones.

Seriously, I've never seen so many young children in a crowd, especially of protesters. WE GET IT. You paid for your sins with "life", which is a nice way to think about your children and sure not to cause any resentments at all.