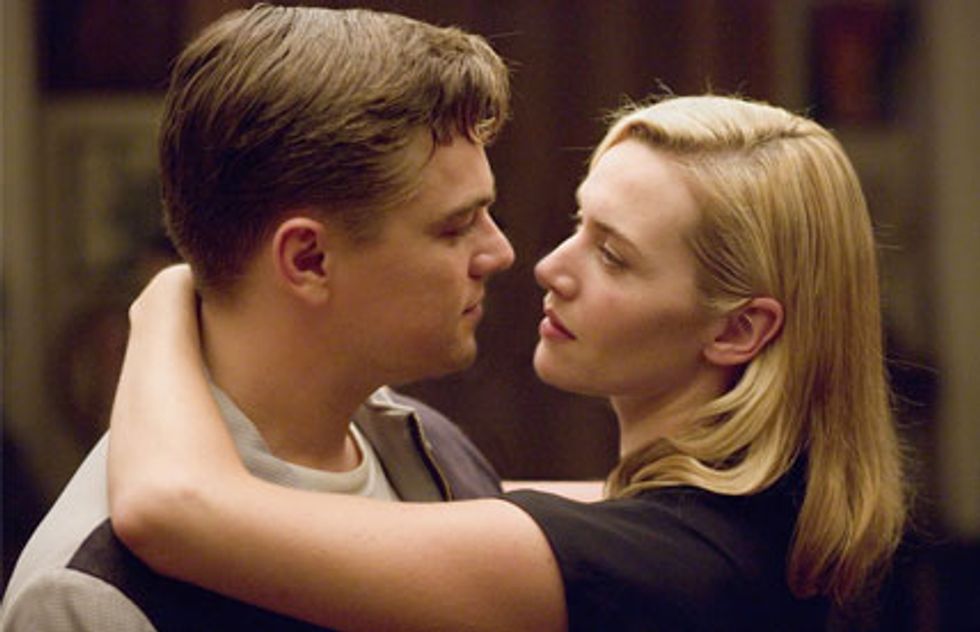 I haven't seen the movie "Revolutionary Road" yet (I don't think it's even opened in Austin), but I have recently finished the book, figuring I'd want to see and probably review the movie when it came out. So I was intrigued to read this piece at the Bitch blog about the differences between the movie and the book, which are numerous, and seem to be oriented mainly around making the Wheelers a slightly more tolerable pair of people than they were in the book. This is, as the reviewer says, an especially problematic choice when it comes to Frank Wheeler, who is---I think---the villain of his own story, a petty, stupid man who throws his wife's very life away in service of his own bullshit, even though it's obviously an accident. As Tammy says, it's a clear-cut critique of 1950s masculinity. Frank is a joke, ranting about the suburban lifestyle he's loathe to abandon, fancying himself as an emotional libertine and yet unable to take the basic step of realizing that his wife's pregnancies aren't a comment on his manhood, a cheater who is more concerned with being cool than the feelings of others, and prone to psychoanalyzing his wife to shut down her criticisms of him, an open display of masculine power. It's not just a little hinted at, either, that he's one step shy of toying with the idea of institutionalizing a sane if sad April if that's what it will take to force her not to have an abortion. He sucks.

But I was surprised to see Tammy's assessment of Yates' portrayal of April.

In the novel, April has a devastating childhood lacking any positive parental figures, a psychological dimension that enables Yates to paint her as a woman too neurotic and emotionally disabled to accept her role as wife and mother. If Yates seems to capture some of malaise Betty Friedan articulated in The Feminine Mystique, which was published two years after the novel, it was certainly not in the service of social criticism about women's oppression. Instead, Yates is more concerned with depicting April's disappointment that her self-deluded fantasies about adult life did not come true. She is by no means a feminist character, but she is a coherent one.

You know, the more I think about it, the more I have to disagree. Obviously, I don't know what Yates was thinking, but the emotional wallop the book packs leans heavily on April Wheeler's bout of self-realization. It's clear to me that Yates is mocking cheap armchair psychoanalysis of women that was used, more often than not in the 50s, to force women's compliance with patriarchal norms. Frank is the one who keeps returning to this idea that April's sad childhood somehow makes her an inadequate housewife with dreams too big to be filled. I assumed the reader is supposed to take that along with all of Frank's other bullshit as just that---bullshit. April is a pretentious twit, but her problems don't stem from childhood trauma. Her problems are more immediate, the first one being that she's dedicated her entire life to a man that she finally realizes sucks donkey balls. You start the book off thinking that April is pretty worthless and silly, but slowly over the course of it, Yates builds another picture of her. You start off thinking she's hysterical because she pitches the most ridiculous fit ever, but then Yates switches gears. You have to go over it carefully after finishing the book, I think, but it's all there. April actually has a lot of integrity, considering her very restrained life choices. Both Wheelers claim to be against the tedium of suburbia, but when April gets pregnant the first time, she's the only one willing to live up to that ideal by obtaining an abortion (that Frank talks her out of). She's the one who realizes that they have to do something to save their marriage if that's what they want, and her idea of moving to Paris and getting a job is kind of silly, but if you put yourself in her shoes, it makes a lot of sense. After all, she's working with the good faith belief that Frank really does hate his job and wants a change, and she's very willing to do that. (It's also possible to read that April is saving herself by finding a way to get out of the house, a sense reinforced by Frank's nightmares of being emasculated by a chic and professional-looking wife.) We also discover over the course of the novel that while Frank thinks that housewifery is the easy life, in fact he's the one who is pretty lazy and April actually works really hard both at keeping up a nice home, and when need be, putting it all together so that they can go to France without Frank lifting a finger.

All of which means that when she realizes that loving Frank, or at least convincing herself that she loves him, was her biggest mistake, we believe her. Yates doesn't really hammer at it too much, but you are left to wonder if April would be a different person indeed if she hadn't believed that she could find herself by marrying a man who was good at putting up an entertaining front. And whether or not the histrionic April we meet at the beginning of the book should elicit more sympathy, knowing what we do about her. It's silly of her, we think as we first read the book, to blame Frank for her shitty and embarrassing performance in a community theater play. He's obviously not to blame for her failures, right? But over the course of the book, that judgment is called into question. It's still obvious that lashing out at him for her poor performance is silly. But you begin to see why April has so much pent-up rage that she can't express in any way that's even remotely constructive.

I felt, too, that we're supposed to blame Frank for April dying. He blames himself, in fact, realizing in an honest moment that if he hadn't bullied her for weeks about wanting to abort her 3rd pregnancy, she would have performed it when it was safe and therefore would have lived. Her note to him telling him not to blame himself is a morbid bit of irony that bookends her miserable saga. At the beginning of the book, she is blaming him for something he didn't actually do, and at the end, she's telling him not to blame himself for something that he really did kind of do.

Both characters are unlikeable, but in the end, I think we're meant to believe that April has something in her that's salvageable. And thus you feel for her when she takes the steps to abort her pregnancy, even though she knows and you know that she's running a strong risk of killing herself. She has to do it anyway, because only by rejecting this pregnancy that her husband bullied her into will she begin to reclaim herself from living in Frank Wheeler's world. Saving yourself is so important, the book implies, that it's worth risking your very life for it.

I can see why the filmmakers decided to soften up Frank for modern audiences, though. When Yates was writing the original book, he was working in a much more sexist environment, and so he really has to make Frank an over-the-top monster in order to drive home the message. Nowadays, you can convey the same ideas about rigid masculinity without making the villainous man so unsympathetic. Look at how they pull it off with Don Draper on "Mad Men".