The uglier the footwear, the more recession-proof 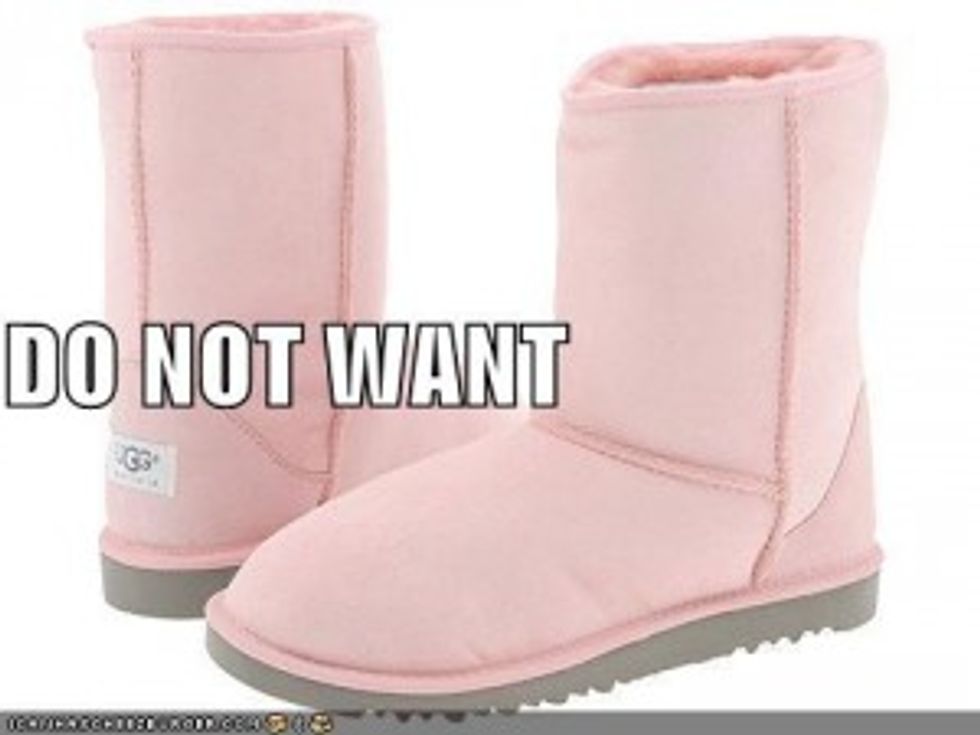 Rebecca Traister has a cute article up about how magazines that peddle the high life are having to readjust their editorial so as to reflect the fact that their readership is so worried about money and/or broke that they can't even fantasize about $500 pairs of shoes without getting a pit in their stomachs. Articles about shopping in your closet, making the most of your dollar, reinventing your wardrobe with clothes you already have---everything but the time-honored strategy of buying secondhand. (Please do not peddle this, fashion magazines. Pickings are already slim for us long-standing resale shoppers.) I disagree with Rebecca's assessment of the situation:

This is very practical advice. It is very sturdy. It is very sage. It is very depressing. As someone who kind of loathes shopping, I nonetheless am horrified by the idea. No one should shop in their own closet unless they are rich and their closet is huge, in which case, they can probably still afford to shop outside their closet anyway. For the rest of us, this is just a fancy way of saying, "Wear the same clothes you've been wearing for the past 10 years." I admire the sentiment, but it's precisely this kind of workmanlike thrift that could suck all the joy out of magazine reading.

In all honesty, these articles have made me want to buy these magazines. I'd rather learn how to do more with the clothes I already have, due to the fact that buying them means I already like them. Instead, I just went with a book on how to do vintage with some pizazz, something I had down in the past, but have lost a little of the touch for, and could use some pushing. People complain about resale prices, but they're still half of what you'd pay for new stuff, except maybe at Cream Vintage, and it's often much more unique an item. And there's always thrift stores and garage sales.

But what's really depressing is that even as the rest of the fashion industry is taking a huge hit, Ugg boots are still selling like hotcakes. Feministe and Jezebel are reporting on this disturbing problem. It appears that many women, given the choice between decent clothes that flatter and perhaps will last you awhile and a pair of shitty boots that flatter no one and are beginning to be the official uniform of the desperate and insecure, will pick the latter every time. According to Jezebel, the Ugg situation has reached emergency levels.

Last November, Ugg opened its first standalone store in Europe, inside a West London luxury mall. The Chicago Tribune reported on December 22 that an area Nordstrom was entirely quiet, except for the shoe department, where Uggs are sold. Racked snapped a picture of shoppers lined up outside the SoHo store on December 24, waiting for it to open. Although initially investors nervous about the retail sector let share prices for Deckers Outdoor Corp. fall to less than $50 in late November, the company's performance has been stellar by every other measure. Earnings and revenues are up from 2007. People are still buying the damn things.

At least tulip mania resulted in tulips, which are attractive flowers. No one wins when you put on a pair of Ugg boots. This is particularly true if you pair the Ugg boots with anything from the Pink line at Victoria's Secret. (Reports from the Houston bad fashion spotting field indicate that a college-aged woman with 5 pounds of make-up on was wearing knee-high lime green sweatpants with the word "Pink" written on the booty with Ugg boots and a hairdo that must have taken an hour to do. This waste of the beauty of youth shouldn't go unmourned.) It would be simpler and cheaper to wear a T-shirt asking for validation. I see these outfits and I blame the patriarchy, for sure, because what other force has the power to break the will and self-respect of young women so thoroughly?

Of course, part of the problem is the ugly shoes fad. I won't even say the comfortable shoes fad, because many examples of the footwear blight aren't even that comfortable. As they note at Jezebel, Uggs are easy to turn your ankle in, and turn your feet into a swamp that just can't be comfortable. I hear that Crocs are comfortable, but they look weird and flimsy to me, like you couldn't walk very far in them. (More field reports indicate that someone had the gall to show up at Emo's wearing both a popped collar and Crocs, all at once. Witnesses blamed the fact that What Made Milwaukee Famous was playing, which is the sort of thing that attracts the wrong element to your club.) Couldn't a sneaker be a reasonable substitute? But let's face it, the trend really started when people started to wear flip-flops everywhere, and shoe stores actually started to sell flip flops specifically to be worn with jeans or even dress flip-flops. Flip flops are ugly and uncomfortable, and the only seeming advantage is that you don't have to bend over and tie your shoes. Which is why they're appropriate for sliding on to run to the dumpster, or to wear between your hotel and the beach that is 15 feet away. But if you're going to walk any further than that, the effort you expend at trying to walk in the damn things, much less keep them on your feet, has to exceed the effort you put into tying your shoes.

So, we've learned that ugly shoes are recession-proof. Why remains a mystery. Still, I'd caution against investing, because while ugly shoes have been a baffling and dominant trend for more than a decade now, there's always a chance that the nation will wake up and collectively realize, "Hey, ugly shoes are ugly!" and boom! It'll all be over. Other inexplicably ugly trends hung in for years, only to be suddenly rejected all at once by the nation. The perm plus spraying your bangs into the sky was the Ugg boot of the late 80s/early 90s, and then it seemed in 1992, the last hangers-on all of a sudden had straight hair and no bangs at all. It will happen, and it will feel sudden. It's just a matter of when.