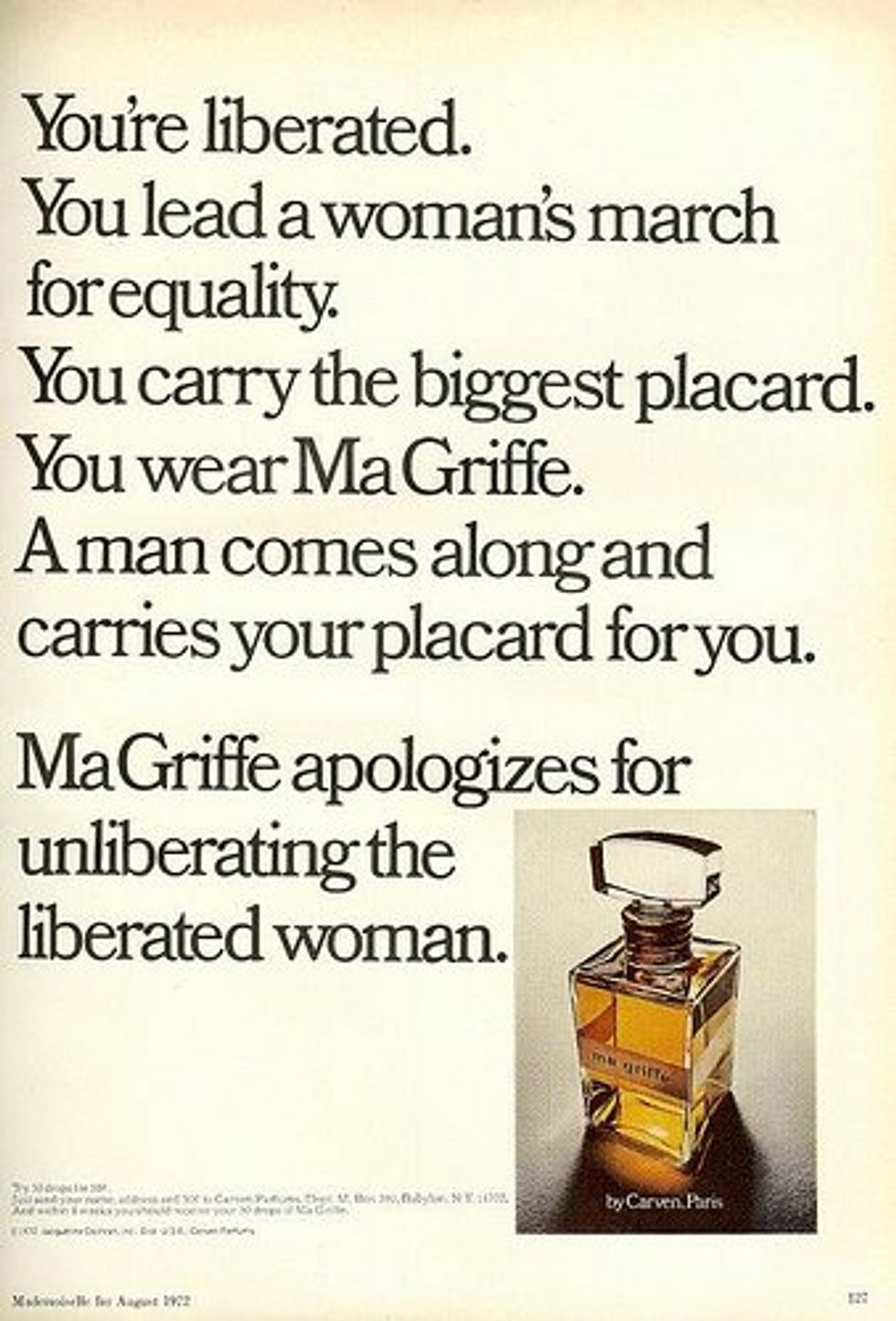 Blogging about Valentine's Day today, because tomorrow is all "Battlestar Galactica".

This ad is from a 1972 edition of Mademoiselle, and is a pretty classic example of how advertisers of the period tried to sell products to women who felt attracted to feminist thought by belittling their aspirations. It seems counterintuitive, but I guess the thinking was that you can't sell perfume to a liberated class, and therefore it was worth turning off some customers to shame the rest into running away from feminism. In any case, the strategy worked. The perfume industry still thrives on selling bizarre romantic fantasies* and women know how to couch their fledgling regard for their own self-worth in phrases like, "I'm not a feminist, but...."

Direct assaults on feminism in advertising are rare now---though direct assaults on women's humanity are still as common as ever---but I think that this ad is worth dwelling on because it really puts the 70s-era radical feminist writings denouncing romance and seduction into perspective. This is the sort of assholery they were up against. One of the favorite quotes that misogynists use to scare people about feminism is Andrea Dworkin's crack, "Seduction is often difficult to distinguish from rape. In seduction, the rapist often bothers to buy a bottle of wine." Of course, the reason that devout misogynists get so fucking upset at that quote is they fail to understand humor, possibly because their own sexism leads them to believe women can't crack jokes. Granted, it's a dark joke that points to the larger theory of Dworkin's that posits that this process we call "seduction" is contextualized as a way to conquer and humiliate women. For this, she was called crazy. I say that anyone who looks at that ad and disagrees with her point is the crazy one. I don't know how much more blatant you can be---seduction is about taking a woman down a few notches by using sex as a weapon against her. Pointing out that sexists can't imagine a sexual landscape where women enter willingly and leave with dignity isn't being anti-sex, but just anti-sexist.

We've moved forward from the 70s in some senses. Outside of the world of porn, it's considered in poor taste to openly describe sex as a way to demean and conquer women. But really, we haven't gotten much better. Bridal and dating reality shows still portray women as singularly obsessed with catching a man to validate themselves, with their dignity being the first thing to do in this pursuit. Same thing with romantic comedies. Women's magazines still sell themselves with articles about how sex is unpaid service work for women, with relentless headlines about 500 brand new, exciting ways to wow him in bed (because if you can't constantly top your previous erotic performance, then you'll lose him and then you'll be sorry!---remember, your own pleasure is an afterthought, if thought of at all). Abstinence-only sells itself primarily on the idea that once a man has sex with you, you're debased to the point that you pretty much deserve to be raped. It seems like the "eager to be a bride to the point of humiliation" thing and the "sex makes you a slut" thing are different, but the thread winding through them is the idea that sex and romance maintain women in a second class category as these silly, debased, owned, dominated creatures---and the romance thing might be more insulting, because it suggests we're begging for it. 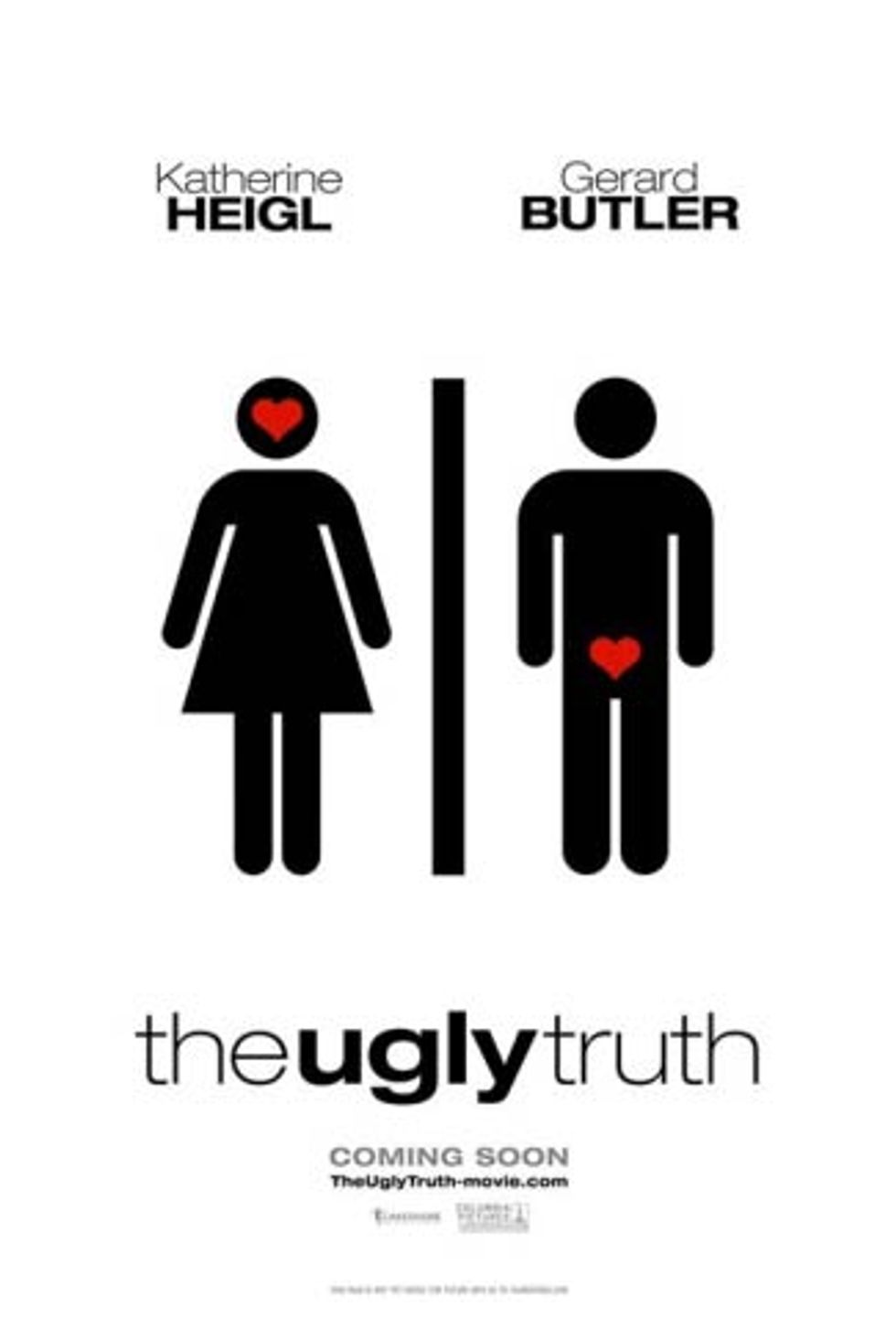 Is this ad that I criticized recently really that much different than the ad above? The belief that romance is a trick men use to lure unwilling women to have sex with them hasn't gone anywhere, and in fact it's the overwhelming theme of most Valentine's Day advertising. This cheeky advertisement from Vermont Teddy Bears both mocks and reinforces this narrative. Of all shows, "Family Guy" really drew the link between the rape culture and romance most explicitly, since the underlying assumption in both narratives is that sex diminishes women, and so they either have to be tricked, cajoled, or forced to give it up.

But even though the sexual aspects of romance grab our attention the most, I think there's more to it that I've seen in others and in my own life, and in our pop culture. You can reject the model that sex is a service that women provide to men and still get trapped in the "women serve, men romance" trap, because there's a lot of other services women provide to men, even if sex is a service-free play time. There's housework, ego soothing, and listening. These duties can be shared equally, but in heterosexual relationships, they rarely are, and women's resentments about giving more than they're getting start to pile up. It's well-understood that men have a duty to compensate women just enough to keep women in relationships with teddy bears, diamonds, flowers, and other forms of romance. It works, in my experience, because our culture makes women feel so bad about ourselves that a little validation goes a long way. I know in my past that despite my bohemian pretensions---I didn't want the diamonds or flowers, but wanted gifts that seemed interesting or unique, and wanted to share gift-giving a little bit---I still got sucked into the idea that romance itself was good, and I wanted very desperately for boyfriends to validate me on Valentine's Day with some sort of gift. And, thinking back on it, it was because I felt horribly insecure in those relationships because I was always being put down and having to give more than I could ever get back.

Yes, even good feminists get sucked in by compulsory heterosexuality, and therefore end up in these unequal relationships where they take many slights to their dignity and start putting way too much emphasis on some mandatory token of affection on Valentine's Day to make up for it and make them feel, however falsely, that he really does care. I bought the book Jane Sexes It Up at a used book store recently, and I was dismayed to recognize some of my past in Merri Lisa Johnson's confession that no matter how feminist she felt, she always somehow was sitting on the spigot side of the bathtub when she and her boyfriend took baths together. For all my pretensions of difference, I guess I wasn't doing any better than the many overworked, underloved wives I'd known growing up who compulsively collected diamond gifts from husbands as proof that they were valued, even if everyone around them indicated otherwise most of the time.

The romance of romance blinded me to this problem. It's easy to rationalize why celebrating something like Valentine's Day doesn't have to be about reinforcing this miserable cycle of neglect/mistreatment of women mollified by some romantic gesture, but can be a celebration of love. Except that it never worked out that way, and during the last Valentine's Day that I celebrated, when my nasty, cruel boyfriend "forgot" to get me a gift (I guess consciously or subconsciously testing to see how much crap I'd take before I'd throw in the towel), I found myself sick with self-hatred for caring, and angry at myself for that because even feeling as low as I did, I know I deserved that small courtesy. So, when Marc asked me if I was the Valentine's-celebrating sort, I thought about it and thought about how the holiday had always been for me about this desire to be validated, pretending that I did feel validated when I didn't, and self-disgust, I said no.

Man, being a conscientious objector to romance is such a huge relief, I have to say. Without the romantic gesture on Valentine's Day, I'm not putting off the desire to be loved and comfortable in my relationship and with myself until then, and have to confront that desire on a daily basis. Luckily for me, I do feel these things now, so I can't say if my experiment of rejecting romance would work to save me in another bad, failed relationship. Or, to put it another way, I don't always have the spigot at my back anymore, and so I don't need romance to distract me from my sense of unfairness. Then again, maybe it's a chicken or egg situation. Perhaps it's easier to be a conscientious objector to Valentine's Day if you're in a relationship where you don't feel always put down or put off, and don't need it made up to you in any way. Maybe, for me, it's a way to take my temperature. If I were to start feeling the need again for special romantic moments, that's a good time to ask myself if I'm not feeling secure anymore and ask myself why. I can honestly say that I don't see that happening to me, though, because I'm finally in my life getting what I'd been wanting.

I can feel the keyboards firing up to protest that you can too have Valentine's Day and not have a broken relationship or self-esteem issues, so I can say I totally believe some people pull it off. I've seen couples I think pull it off. But the dominant cultural narratives about romance, and the experiences of too many people show, that romance is something our culture constructs not to celebrate love, but to avoid it. We don't even try to hide this fact very well, with the majority of commercials for romantic gift items being aimed at men who are looking for ways to buy off women that they can't be bothered to keep happy and sexually aroused by treating them with more fairness. If you can pull it off, more power to you. But it's very important to ask the hard questions, because way too many people are suffering out there and using romance as a crutch to distract themselves.

*I guess sexism is necessary to sell expensive perfume, because otherwise the insistence on it makes no sense at all. Feminists wear perfume, after all. But maybe we're less likely to feel that we have to have a bottle of the $100 an ounce stuff or else no one will ever love us.