Bamboo Review: Drag Me To Hell 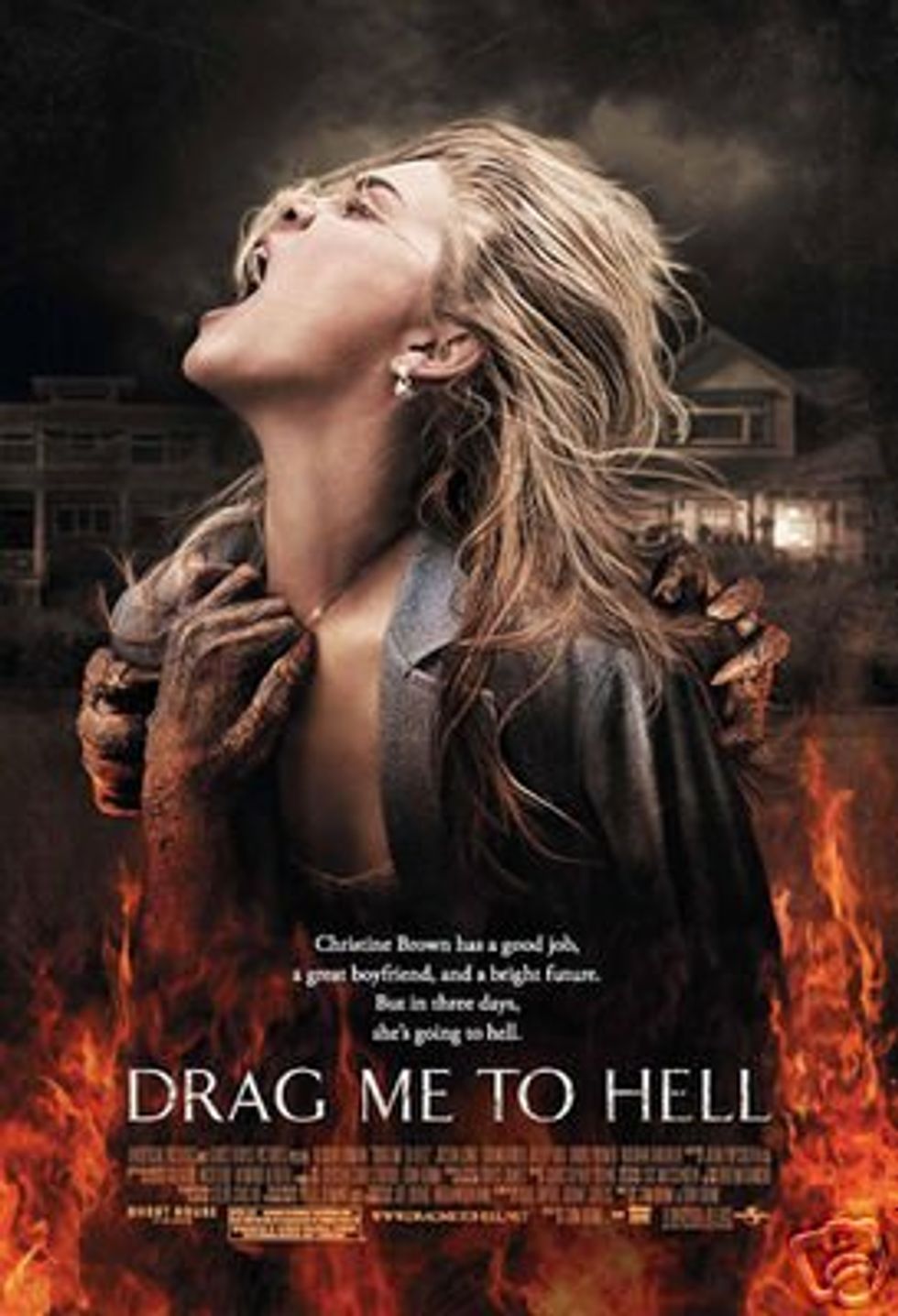 Let me be the first to say that when I saw the previews for "Drag Me To Hell", I was skeptical. The trailer played it like a straight horror film just like the gazillions that come out now, where the pleasure is in watching some young woman chewed up and tortured, for no apparent reasons outside of sheer misogyny. That Sam Raimi was attached to it depressed me even more, because the trailer made it seem like he was finally and completely selling out his roots in cheeky, imaginative horror film-making. And too bad, because a good horror movie can be a lot of fun, but good horror movies are few and far between.

But then the reviews came out, many calling it the best horror movie to come out in years, and highlighting how funny it is. Could it be possible that the Sam Raimi that wrote and directed the "Evil Dead" trilogy was back to form? My consort and I decided to go find out last night, and I can confirm that this movie is fucking awesome. Dark, weird, hilarious, and totally scary, but in that good way, where you can't tear your eyes away, instead of where you're hiding your head in someone's shoulder because you can't stomach more cheap violence that stands in for genuine scariness. Seriously, if you like horror movies, you have to see this one. Of course, if you're easily disturbed, I highly recommend you don't see this movie, because Raimi is definitely willing to embrace the disturbed to get a rise out of you (albeit always with a wink that causes the audience to laugh as hard as they jump).

It's probably as hard to explain why this movie is different from standard horror crap as to explain why the "Evil Dead" movies are, because in both cases you have a pretty standard horror premise, which is that the evil demons/serial killer/monster is trying to kill or terrorizing the handsome young heroes. Of course, in "Drag Me To Hell", the evil demon is really only torturing one person, Christine Brown, who was cursed after signing off on an old woman's foreclosure. But after seeing the movie, I realized why it stands out from the pack like the "Evil Dead" movies do, and what it is that Sam Raimi does that other horror film makers don't. First, you have the inventiveness. Raimi takes every horror convention you can imagine, and breathes new life into it. It's fun, and a big fat fuck you to movies that think that coming up with endless new ways to dismember nubile young women is an appropriate substitution for imagination. But the other thing I liked a lot, and this is what made Bruce Campbell a cult icon, is that Raimi completely reimagines the convention of the beleaguered protagonist who is trying to find ways to save themselves. In most horror movies, the protagonist is reactive to the point of passivity---running, screaming, only using as much force as necessary to save themselves. But like in the "Evil Dead" movies, there's a turning point in this one where Christine starts aggressively seeking ways to save her own hide. It's not quite the Ash "take a chainsaw and hack off your own possessed hand, which you then fight with a shotgun" moment, but it's close and got as big a reaction from the audience. Once Christine (and Ash in the "Evil Dead" movies) crosses that line, it's Game On, and you get a horror movie that really is what it should be---a real, escalating, nutty battle between the evil forces and the protagonist.

The trailer for this does its damnedest to make it seem like yet another horror film aimed at a young male audience on the premise that they'll enjoy seeing young women sexually objectified and then murdered for daring to be so hot. If audiences show up expecting that, they're going to be really disappointed. I can't even think of another horror movie I've seen built around a female protagonist that treated sex as a complete non-issue. There's a minor amount of obligatory cheesecake, but by the time that happens, it's so far beyond even the most aggressively sexist "punish the sexual woman" reading that it's unlikely to set off the lizard brain misogyny that most horror movies rely so heavily upon. No, the lizard brain horror fans will be sad to find out that Christine's transgression isn't being sexual, but it's putting her own petty ambitions over her instinct towards generosity. For a fluffy horror movie that exists strictly to thrill and amuse you with its inventiveness and humor, it's an interesting choice, and obviously not an idle one, because the character keeps returning to the fact that she had a choice, and she made one that she knew in heart was the wrong choice. I doubt Raimi is trying to make any grand statements, of course, but it's more an artistic choice---the horror is rooted in a real moral dilemma, not the phony sexual prudery that drives most horror films.

Also, I really like Justin Long and hope he can keep getting good roles like the one he has in this movie, where he plays the skeptical but utterly adoring boyfriend. And the actress who plays the gypsy who curses Christine---Lorna Raver---is especially awesome in a role that couldn't be easy.