George Will will grump your ass right into your car 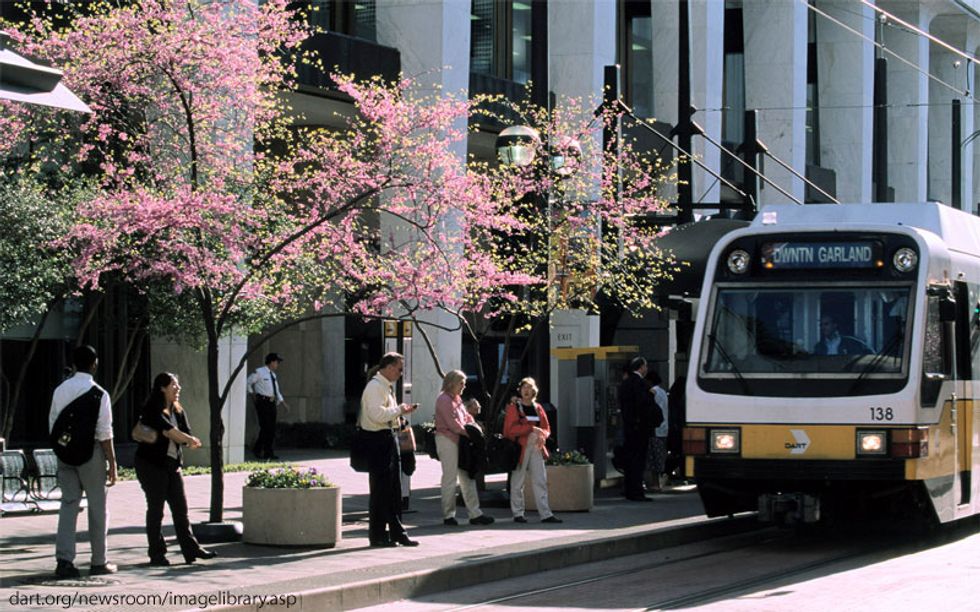 Cross-posted at The Clade.

Matt, while utterly denouncing and mocking this George Will piece about transportation, doesn't do enough justice to how truly terrible this piece celebrating pollution and the destruction of our planet one commute at a time.* Also, and I know Auguste will be pleased by this, Will includes Portland in the list of cities that every conservative should consider during the Two Minute Hate. I can't wait until Austin gets nationally noticed.

Anyway, the column is fact-free and hateful, and Will's arguments about the environment come exceedingly close to "I'm going to die before it gets really bad, so fuck you all," but on top of all that, it's an offense to language and writing as an occupation. Witness the first paragraph:

You might think the Department of Transportation would be a refuge from Washington's inundation of painfully earnest and pitilessly incessant talk about "remaking" this (health care, Detroit) and "transforming" that (the energy sector, the planet's temperature). Transportation, after all, is about concrete practicalities—planes, trains and automobiles, steel, asphalt and concrete.

Will needs to retire now, because he actually just argued that the sheer physicality and practicality of something precludes remaking and transforming it. This shows that he's lost his grip on the nature of verbs. "Remaking" and "transforming" could be abstractions, but they are metaphorical if used abstractly. They stem from imagining physical, practical remakings and transformings. For instance, this morning, I physically transformed a pile of ground up coffee beans into liquid coffee that was more suitable for drinking. And I remade that cup of coffee by pouring half and half and sweetner in it. Doesn't get more physical and practical than that.

In that same light, when people speak of remaking and transforming transit systems, they aren't talking about holding hands and projecting thoughts of non-pollution at it. It's all about physical objects, observable systems, real world experimentation, and practicalities. If anything, it's a subject that people tire of easily because it's so wonky and pragmatic, and the only reason it holds people's attention is because the vast majority of transport ourselves from one place to another every day, usually multiple times a day. Reading this first paragraph, you get the impression that Will thinks "Planes, Trains, And Automobiles" was a film about philosophers and mathematicians kicking around completely abstract ideas.

Furthermore, the new transportation secretary, Ray LaHood, was until January a Republican congressman practicing militant middle-of-the-roadism. He knows what plays in Peoria, and not just figuratively: He is from there. Peoria is a meatloaf, macaroni-and-cheese, down-to-earth place, home of Caterpillar, the maker of earthmoving machines for building roads, runways, dams and things.

LaHood, however, has been transformed.

At this point, Will makes his assumptions sparklingly clear: Transformation itself is evil. Perhaps he saw the "Transformers" movie, and it scarred him for life against the concept. However, by even writing this column, Will subverts his own anti-change value system. After all, he is writing an op-ed, with the purpose of persuading people to see things his way. This means that he is trying to change people. And it's a radical change at that---Will wants Americans to forsake our interest not just in public health but individual health. He's not just pro-pollution, he appears to be hostile to all non-baseball-related exercise, since he singles out bicycling as a particularly stupid and odious form of transportation.

Where to start? Does LaHood really think Americans were not avid drivers before a government highway program "promoted" driving? Does he think 0.01 percent of Americans will ever regularly bike to work?

As Matt notes, .4% already do. But what's particularly funny here is that Will actually thinks that people commute to work by car because they're "avid" drivers. Look, sitting in traffic listening to some two-bit morning DJs make pre-scripted Paris Hilton jokes while wishing (!) you could just be at work already isn't exactly hitting the open highway, wind in your hair, and rule-driven life at your back. Will's head would explode if he knew that I can name at least one person in my personal acquaintance who loves cars and driving, but commutes to work on a bicycle because sitting in traffic sucks kangaroo balls. People drive in most places because taking the bus or train takes too long, and/or they hate sitting with the hoi polloi on a bus or train. Or they live too far out to take a subway that does come by at a regular enough interval that you don't have to worry about missing it if you sleep in a little too late. If you love your car, the last thing you want to do is ruin it by putting it through a grinding daily commute.

Will thinks people drive because they're good, conservative Americans who enjoy shitting on the planet to prove they're not beholden to any train schedule. By his measure, Western Americans---with our rugged individualism---should riot against the growing use of light rail systems, or at least turn them into laughingstocks by not using them. Wrong! Even notoriously conservative parts of the country, such as Dallas and Salt Lake City have seen the light rail systems turn out to be more popular than the most optimistic projections, because it turns out that when people are sitting in traffic and they see the train zip by them, they rethink their choices pretty quickly.** I can attest that traffic in Dallas doesn't seem nearly as bad as it did before light rail.

*I know that Will doesn't "believe" in global warming, but I think even your largest asshole conservative "believes" in air pollution. You can't deny coughing, you know.

**This is why I fear Austin light rail will fail. Since they laid it on already existing track, it's not visible or especially accessible to most of the residents of the city who would benefit from it. But clearly, the issue is education not rugged individualism.