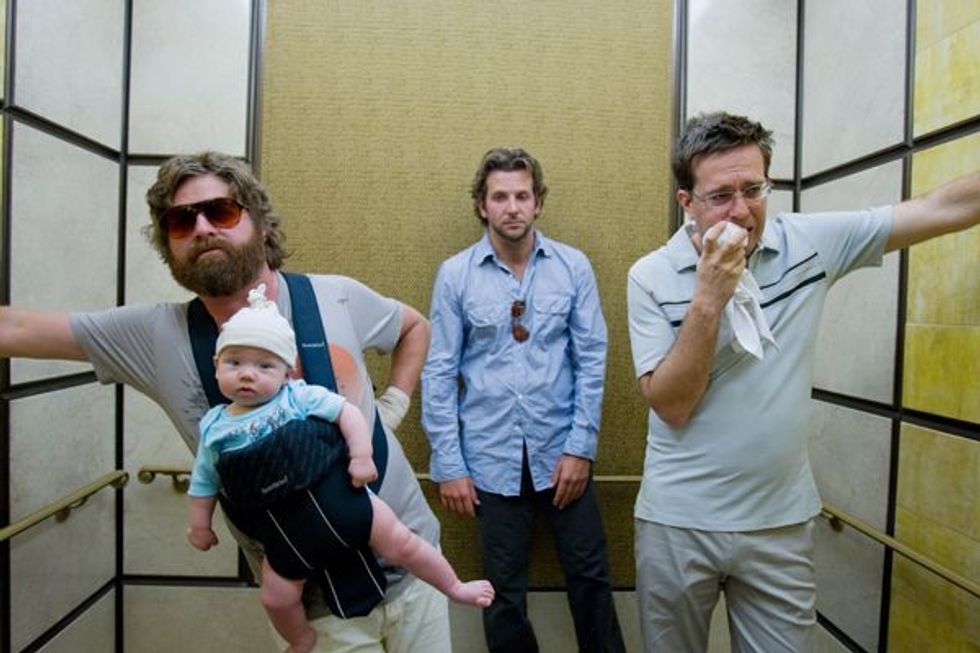 The preview for the upcoming movie "The Hangover" has decided to plague every movie I see in the theater, probably from here until the movie is finally moving onto DVD. The movie seems like it's got some funny stuff on it. The premise is paper thin, as good buddy comedy premises should be: a bunch of dudes, on a bender, forget everything they did and have to piece together their antics. If that was all there was to it, I doubt I'd have a problem, but it was Marc who pointed out that it just has to be a bachelor party that kicks off the antics. Which means we're going to be treated to another movie where the premise is that men who are caught in the clutches of a domestic matriarchy run away to escape their female captors before any fun or antics can ensue. It's "Old School". Or the runaway scene in "Knocked Up". It was played up for the height of misogynist laughs (there's even a dead prostitute!) in "Very Bad Things".

Even soft "family" comedies employ the trope of the all-powerful matriarchy. On the plane back from France, I watched "Marley and Me", because my iPod was running low on juice. Ostensibly a movie about a dog, it was in fact a movie about how a man's life and career ambitions are slowly sucked out of him by an all-powerful matriarch, who lures him into a life where he has to get married and have kids and write a column to keep it all together, instead of gallivanting around the world doing exciting news stories. And even an intelligent romantic comedy like "High Fidelity" falls into the trap---women don't understand these crazy male things like fun, pleasure, music, or partying. (Unless they're exotic she-creature musicians who don't seem to exist on our plane, just visit occasion.) But despite the fact that woman are a complete drag to be around, men have no choice but to get with them. Sometimes men are trapped by pregnancy, but more often the women just exert this vague power over men that men are helpless to resist. Once one of these women gets you into her snare, your life is officially over. And you have no choices.

When it comes to goofy comedies, the "advantage" of setting your story in the fictional matriarchal world---where men have no choice but to marry, parent, and suffer---is that the escapism means escaping women, and you don't have to do something stupid like cast a woman in a genuinely comic role. The premise that women can't get into hilarious goofy antics just like men is becoming increasingly hard to swallow, and so you need elaborate excuses to get rid of them, like bachelor parties. Or setting your hilarious antics in high school ("Superbad"), or positing that your male characters are way to immature to be tolerated by women ("40-Year-Old Virgin"). And while many of these movies are super funny, I have to ask why filmmakers have slipped into going out of their way to create situations where their characters minimize contact with women, which means that you don't have to cast any comic actresses. "The Hangover" really makes this obvious---if you made a movie just about a bender, then there's no excuse for not having female characters acting like morons right with the guys, instead of being peripheral characters.

Of course, if you do that, you have to abandon the ridiculous premise that we live in a matriarchy where women force men into domestic servitude against their will. Christina Hoff Summers must be thrilled---any excuse to suggest that women are malevolent dictators who push men around, despite the fact that women still are marginalized when it comes to real power, is a good one. I suppose we're meant to pity the women in these comedies, who are put in charge of child-men that need constant tending and feeding. But in actuality, you can't feel sorry for them, because they are clearly too stupid to breathe if they put up with this shit, despite being omnipotent being who rule the universe. Take, for instance, the scene where we're supposed to feel sorry for Leslie Mann's character when we find out her poor, beleaguered husband has been escaping her Stasi-like monitoring of him to play a little fantasy baseball. I get the impression we're supposed to care, but by the time it happens, you're so fed up with her being a screeching harpy that you hope she just cuts him loose. But no luck. Not only are women granted god-like power, they don't have understandable motivations, but have no desires outside of securing and controlling men.