How come people aren't so scared and resentful anymore? 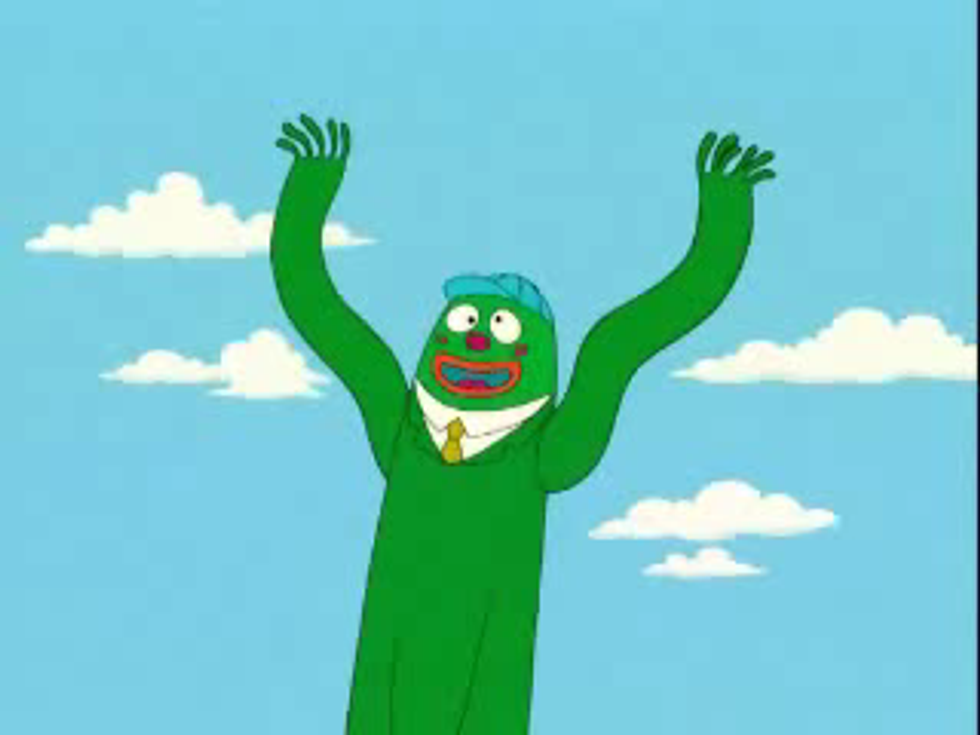 Paul Krugman has an interesting post up about how Republican identity politics aren't working as well as they used to, and that's causing them to flail about, unable to get their shit together. For a long time, the conservative argument has been, "Vote for us and we'll protect you from the rising tide of intellectuals, non-white people, gays, and women who don't know their place. We know that you often feel small and unmanned just because you're ignorant and fearful of difference, but we're here to tell you that being ignorant and fearful are the marks of True Manhood. As proof, we have George Bush, who will show you the outline of his cock through a fighter pilot uniform, to show that he has one." You'd think that sort of premise would have a narrow following, but it turns out that if you cobble together people who felt left out of the sexual revolution, the proudly stupid, the racists, and men who live in constant fear that someone's going to find out that they're actual pussies, you had enough to put together a coalition that won elections.

The thing that is really driving conservatives crazy, I think, is that their identity politics just isn’t working like it used to. Their whole approach has been based on the belief that Americans vote as if they live in Mayberry, and fear and hate anyone who looks a bit different; now that the country just isn’t like that, they’ve gone mad.

Part of the problem is that Mayberry isn't what it used to be. Remember that a lot of Bush's appeal was that he came from West Texas, which is supposed to be the heartland on acid. And the hometown he claims---Midland---still has that resentful middle class people playing redneck attitude all over it. But I grew up a couple hours south of that in an area that's even more West Texas, and well, times are changing there. You've got the wind farms and organic beef ranches. Marfa is now a little art colony beloved by yuppies, and I saw someone working the geek chic aesthetic last night wearing a Marfa, TX T-shirt. My hometown apparently now has a record store run by a Lou Reed fanatic, and the county I grew up in, which voted for Bush for the past two elections, went for Obama this time. This, despite having a population density that puts Alaska to shame. Now, this isn't exactly a huge change---that part of West Texas has always had a big hippie contingent pushing back against the old boy network, and white people don't really have a majority and haven't in a long time---but it shows that there was a lie at the center of the mythology about Mayberry.

Of course, Democrats have pandered to this kind of identity politics forever, in hopes of breaking off a few votes from the anxious masculinity set. But one of the most interesting and underrated things that Obama did was quietly but decisively demonstrate that you don't have to fit the badly-dressed fishing and chewing stereotype to be a Real Man. And in doing so, I think he woke up the right wing and mainstream media to something that should have been obvious, which is that the redneck set and their worshippers don't actually have a lock on secure masculinity. It's really kind of silly, because the right wing noise machine and their mainstream enablers knew for a fact that the way to stir up the troops was to provoke those insecurities---imply that someone was out to rob them of their manhood or provoke insecurities about being ignorant and provincial by calling liberals "elitist"---but despite this, I guess they must have honestly not realized that said insecurities were easily provoked because the people who have them are, duh, insecure.

But America is getting more urban, more diverse, and we're even getting exposed to more things, and it's changing the equation. As each generation comes up, fewer of them feel left out of the sexual revolution. (I went to a condom couture show on campus a few weeks ago, and even the College Republicans had entered a dress. Made of condoms. This should make their elders realize they're losing the war rapidly.) And frankly, there's a lot more models for how to be a Real Man nowadays, despite mainstream media's brave attempts to shame men who shower and dress nice by calling them "metrosexuals". Geeks aren't excluded from the manhood club, not when the most famous business owners in the country aren't car manufacturers so much as the guys who brought you your computers and iPods and video game systems. Intelligent, urbane men are a constant right wing target for masculinity shaming, but let's face it, said men have a couple aces in the pocket, namely they aren't little babies that are scared of dealing with women as equals and they win the sexual prowess contest without even breaking a sweat, and good luck defining masculinity without that.

Anxious masculinity and elitism fears have always been one entangled beast, and Obama's election has reassured a lot of people that there's nothing to be afraid of. What it's also revealed is that the right wing noise machine, while composed of a bunch of tweedy coastal types with elite educations who simply worshiped the fishing and chewing set that they mistakenly thought gave them the key to feeling like Real Men, doesn't actually get the objects of their worship as well as they thought. Take the attempts to rile people up over Obama's use of Dijon mustard on a hamburger. Watching that go down, I thought that some people need to get out of New York and D.C. and got to Peoria to see that you can, in fact, get that kind of mustard there, even though they'll probably call it spicy mustard or brown mustard. It makes you wonder how long it is before the right wing tries to rile up the base by suggesting that an evil foreign elitist conspiracy has taken over the government, and you can tell because people are eating this thing they call "salsa". That's sure to make the heartland panic. If you think I'm kidding, consider that The Hill is actually trying to cast suspicion on Sonia Sotomayor because she enjoys Puerto Rican food.

Of course, I'm not going to rule out that they can regroup and find new and exciting ways to stoke the resentments of white people losing their privilege, straight men with major masculinity issues that can only be soothed through anti-feminism and homophobia, and dumbasses who resent people that are smarter than them. But for right now, it's entertaining as hell watching conservatives flail.