The before/after pictures fill one with an ineffable longing

Lisa and Samhita found the existence of this business irritating, but I have to admit, it caused me to crack a smile. 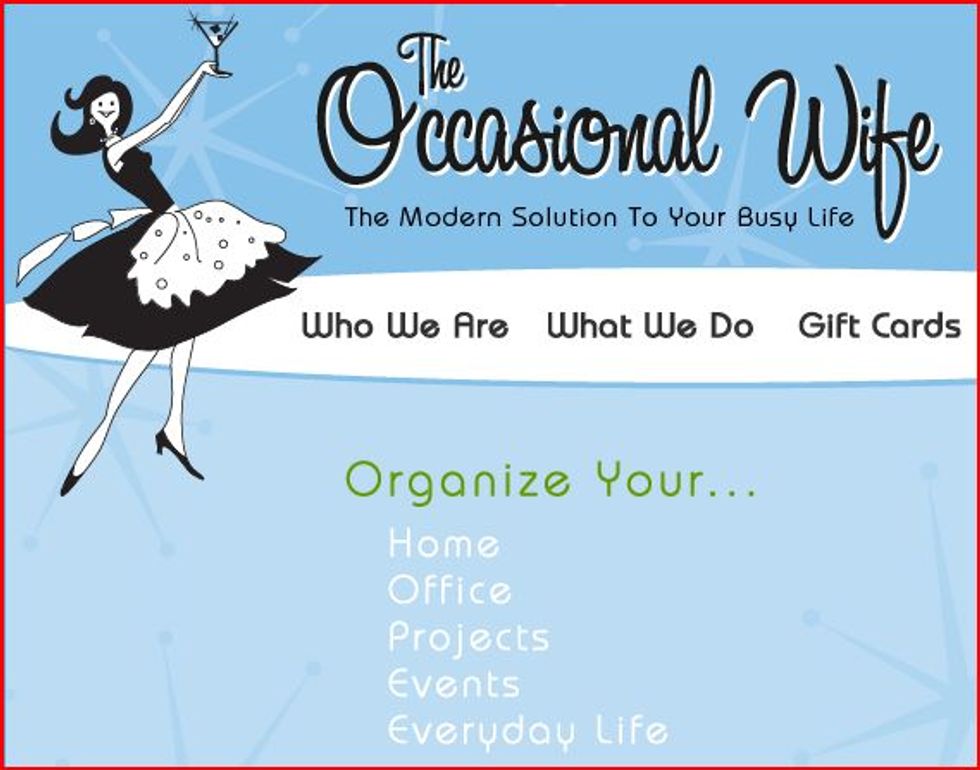 The idea is simple---you call this business when you have wife duties that you can't get to right now. I suppose it should bother me, because the implication is that "wife" is a functional, servile role, but it didn't bother me, because sad as it is, it struck me as accurate. In fact, it reminded me of the second wave classic by Judy Brady called "I Want A Wife", which made the same observation about how wifehood is constructed as servile.

In turn, I've always liked that essay because it reminded me of a joke I often heard from women in my family growing up, when the duties of being a wife and being a full-time employee became too much to handle in the day: "I want a wife!" Hey, there's a reason that I still think dark humor is one of the best forms of feminist analysis, since it's the first kind I was exposed to, albeit from women who didn't really see it as such. Really, Brady's observation is nothing new, but her eye for detail is what really sells the essay. It's true that one can technically be a wife without being full-time support staff to your husband, but we have not even come close, as a society, to abandoning the idea that certain things are wife duties. Which is why I'd like to slightly disagree with what Lisa said here:

Second, the business only makes sense in a world where “real” wives are obsolete. Prior to industrialization, most men and women worked together on home farms. With industrialization, all but the wealthiest of families relied on (at least) two breadwinners. During World War II, women entered men’s occupations. In the 1950s (the era to which this business implicitly harkens), Americans were bombarded with ideological propaganda praising stay-at-home wives and mothers (in part to pressure women out of jobs that “belonged” to men after the war). Since then, women have increasingly participated in wage labor. Today, the two parent, single-earner family is only a minority of families.

So, in our “modern” world, even when there is a wife in the picture, there’s rarely a “wife.”

It's true that a lot fewer women have all day to attend to their wifely duties, but that doesn't mean that they aren't "wives". The duties didn't dry up, and while men have picked up a small amount of them on average, most of the duties outlined on the website still fall to women. Linda Hirshman alerted me to awesome FAQ sheet on who is doing the housework, even with "wives" being obsolete, and to no one's big surprise, "wives" are not actually obsolete. They've just added "pulling down a paycheck" to their list of duties. For wives, the only way to opt-out of being a "wife" is to let the household kind of fall to hell, because getting your husband to take on more wifely duties just doesn't happen. I think this was my favorite part:

If a wife thinks that women should be equal to men –

she does less housework, but her husband doesn't do more of it. 37.

she does less housework, but her husband doesn't do more. 38.

With all this in mind, the second I saw the front page of this Occasional Wife website, I knew immediately that it was aimed not at men, but at women. It's a bad tactic to aim it at men, because a) for men it would immediately make them think of sex, which is not one of the services provided and b) it would probably make men feel guilty and weird. This is aimed squarely at women, and the tactic is using this dark humor---hey ladies, you have to be the wife, but you don't have time, and what you need is a back-up wife, right? In that context, it's hard for me to be angry. The intended customer base for this website experiences wifehood as "wifehood"---they're still on the hook for organizing, shopping, decorating, etc. And so I read this as a dark joke to the customer about her lived experience, and the retro imagery is ironic. The story of the site's origin confirms my suspicions.

The business is run by three women, and they explain that this business was born out of personal need, and one's posing tongue-in-cheek in an apron. True, it's not exactly fighting the power, but as the housework stats link I shared shows, even if you get husbands to agree to feminism, that doesn't actually result in physical relief of wifely duties. Which leaves one with wry humor and a need to hire the work out.