The entitled wingnut and his silencing tactics 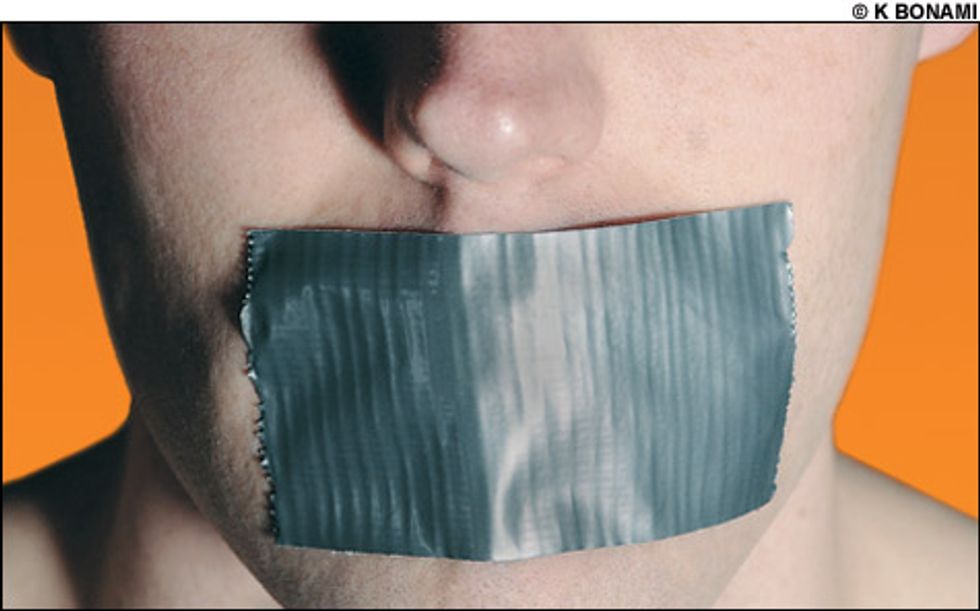 Hard as it may be to believe, but the wingnut sense of entitlement reached new levels this week. No, it's not when Dr. Tiller's assassin Scott Roeder called the AP from jail and complained about getting treated like he was in jail for murdering someone, which is just an extension of the attitude you get from "pro-lifers" who go into clinics for abortions and demand to wait in a separate room from all the trash who got there by fucking. It came from this bizarre episode, where David Letterman made a joke about Sarah Palin bringing her daughter to a Yankee game, where she got knocked up by Alex Rodriguez.

Wingnuts are trying out this new word "misogyny" lately, though it's clear that they don't know what it means, and think that the definition is, "Insulting the purity of conservative royalty." Granted, it's hard to pretend that Bristol Palin is a virgin, but they lucked out, and the daughter that Palin took is 14-year-old Willow. The word "rape" is getting tossed around, though it's entirely unclear if the joke writers realized that it was the virgin daughter instead of the disgraced daughter of the new right wing royalty, and I suspect that they didn't. What is clear is that if it were the daughter of someone who is not right wing royalty, this wouldn't be an issue. The main problem here is that jokes like these are taken as insults to the tribe. From a certain perspective, it's fascinating seeing the old-fashioned patriarchy that right wingers strive to emulate coming out---insulting the purity of "their" women is how to get to them.

Alas, they can't have Letterman executed for insulting the queen's daughter's virginity, which belongs to her father and shouldn't even be referenced by the hoi polloi. By and large, right wingers prefer to find more vulnerable proxies to work out their anger on---ordinary people are much easier targets than the establishment or even powerful individuals like Letterman. But a head must roll for insulting the daughter of the queen, right? And the winner of the lottery is Roy Edroso. Who did not make any jokes that could even be construed as rape jokes or slams on the saleable virginity of Palin daughters, but he did make fun of the wingnuts for desperately grasping at smaller and smaller outrage straws.

Unfortunately, there isn't a death penalty yet for bloggers who make fun of the wingnut tribe, but Dan Collins knows that while they can't have Edroso executed, they can still have a virtual execution of their favorite sort---let's get someone fired! Surely all employers everywhere know that insulting a wingnut is a crime against humanity on the level of being a serial killer and will immediately terminate your employment. Hopefully, you'll starve to death, but they'll take ritual humiliation if that's all they can get.

You know what? I think maybe I should get the Village Voice editors’ take on this squalid episode. There are some good writers over there. You’re not one of them, Edroso.

Indeed. Let's tattle the the Village Voice about Edroso's wingnut-mocking ways, a job they specifically hired him to do. That the tattletale thinks that the unmockability of wingnuts is so enshrined in the hearts of anyone who writes a paycheck that you can get someone fired for doing the job they were hired to do is a brand spanking new level of entitlement, a level previously unheard of in the human species.

There is a point to this. In the wake of the second act of domestic terrorism in two weeks, the questions about whether or not the constant spew of lies and haterade from the right wing media is a public menace are increasing. (This will immediately be treated by right wingers as a call for government censorship, even though it is not, but obviously, they have trouble telling the difference between being criticized and being forced at gunpoint, which is relevant to this discussion.) I would also point to the right wing blogs penchant for getting people fired for irritating them as an example of how the attitudes they're inculcating, especially now that the Republicans are out of power, encourage violence. While wingnuts will squeal like babies about censorship for merely being criticized, they actually are always on the lookout to silence political opponents by force. Murder is illegal, but depriving people of their livelihood or privacy is an effective way to send the signal that they will not tolerate criticism or opposition and will silence you by force, if necessary.

Thus the outing of Publius by Ed Whelan is another example. Whelen didn't just out him, but linked to his contact page at his place of employment, and certainly to any of us who've seen this song and dance before, there's no doubt that Whelan was hoping to inspire his readers to realize---as lone wolves, of course, who he certainly didn't encourage---that they could start irritating Publius's boss, with the hope that he'd project that irritation onto Publius and separate him from his employment. Again, I doubt that'll happen, but it's certainly the hope.

If there's any doubt that the right is inculcating a tribal identity politics coupled with a strong self-assurance that they have every right to use force to silence opposition, consider this: Operation Rescue is trying to buy Dr. Tiller's clinic. I hope this announcement causes the authorities to take the possibility of conspiracy seriously, because while Operation Rescue claims that they had nothing to do with the assassination, what they're doing is making Dr. Tiller's clinic a trophy, which shows that a) they totally see this as warfare and b) despite their cowardly denials of responsibility, they're basically claiming responsibility.

When the use of force to silence your critics is mainstreamed in your movement, and the cowardly move of picking on vulnerable individuals is lauded because hurting someone, anyone just feels so right---well, it isn't shocking that some people take the "let's hurt someone" and "let's shut them up with force" attitudes to the level of actual violence.

Indonesia's Mount Sinabung erupted on Friday, spewing a massive column of smoke and ash up to 2,800 metres into the sky.

The volcano in North Sumatra province started belching ash and volcanic material at 9 am and the eruption lasted almost six minutes, a local geological agency said.