Save us all from portrayals of responsible alcohol use 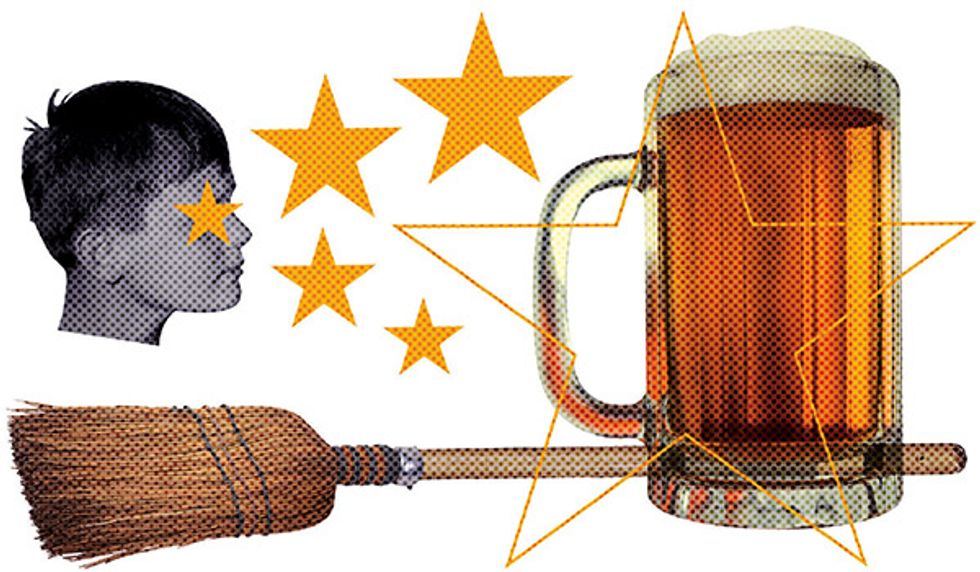 Via Atrios, I read last night this moral panic that struck me as one of the funnier ones I'd read in a long time. It's about the presence of (gasp!) alcohol in the latest Harry Potter movie. Apparently, the British are supposed to pretend that they have the same furtive attitudes toward teenage drinking that Americans have. Because contrary to what the article implies, high school age kids drinking in movies are not unknown in American culture---every teenage comedy I've seen has at least one scene of an all-night blowout party where everyone gets totally wasted and stupid, because there are no adults around. But we're supposed to be worried about the Harry Potter movies, because they show the heroes engaging in responsible alcohol use, and the adults around them don't melt down into total panic attacks about it.

It's true that in the Harry Potter books, alcohol is everywhere, much like it is in the real world. That's always been the charm of the books, that the magical happenings blend in with normal human behavior. (Which is why the ending where everyone marries their high school sweetheart was so jarring, because it was an unrealistic touch in a generally realistic characterization pattern.) The characters do knock a few back at the pub, toast their fallen comrades, and drink at parties. They are also 16 years old in this movie, in a wizarding world where 17 is the age of adulthood in a country where the drinking age is 16/18, depending on the circumstances. In the 6th and 7th books, we're supposed to imagine characters in that gray area between adolescence and adulthood, and drinking alcohol is a normal part of that phase of life. There's no sense that Rowling applauds irresponsible drinking. There's only one scene where characters get stupid drunk, and the point of that is that they're stupid to do so, because then one of them is exploited by Harry to get information out of him. Telling kids that alcohol loosens lips doesn't strike me as an endorsement of getting stupid drunk.

I'm not trying to imply that Britain doesn't share some of the problems with binge drinking that the U.S. does. But there's no particular reason to believe that the U.S. system, where kids can't drink in public or around adults until 21, so they instead choose to drink almost exclusively in situations where getting absolutely hammered is expected, is any better. Nor do I think that lying to children, as this NY Times article suggests you do, is the best way to teach responsible habits.

“I hope parents can talk to their kids and tell them even though Harry Potter made that seem fun, that it isn’t O.K.,” said Dr. Welsh, the author of a 2007 article about alcohol use in the Harry Potter series, published in The Journal of Child and Adolescent Substance Abuse.

Hey, I don't have a degree in this subject, so what do I know? But it seems to me that if you tell kids that the movie made drinking "seem" fun, in hopes they think it's not fun, they're going to realize the first time they drink and it is fun that you lied to them. And they'll start to wonder what else you lied about.

I'm far from the only one who thinks the prohibition approach to drinking, especially for the college-aged set, is an epic failure. People who are closest to the subject also are beginning to really think that setting the drinking age at 21 is failing in its stated mission to protect younger people.

College presidents from 100 of the nation’s most prestigious universities are petitioning lawmakers to lower the drinking age from 21 to 18 years of age. The movement, known as Amethyst Initiative, was started by John McCardell, former president of Middlebury College in Vermont, over a year ago in an effort to resume the drinking age debate, Associated Press article said.

The idea that banning something might encourage abuse of it is counter intuitive, but we have reams of experience at this point to show that the prohibition has created a culture of adolescent alcohol abuse that has its own customs that differ from those of older, wiser, and crankier adults who have to suffer hangovers. Younger drinkers don't really have the experience of drinking with older people who can model moderation for them. In addition, the prohibitions on drinking create this scarcity mentality, where underage drinkers suck up all the alcohol in sight when they do get to drink, probably because there's situations where they don't have that privilege, and they resent it. The prohibition creates incentives for underage drinkers to drink heavily before they even leave the house to socialize, because they don't know what their access will be like---though it's usually pretty good, and then they end up getting completely hammered. Alexandra Robbins described this process in her book Pledged, and it seemed that drinking before you go out drinking is the norm in at least the sorority environment. This can create lifelong habits, I fear, though my experience is that turning 21 starts a process of moving into more moderate drinking habits. Not that people don't get drunk, but drinking to get as drunk as possible in as short a time as possible stops being the goal.

But don't take my word for it. Take this guy's.

One of the people who was instrumental in pushing for laws to increase the legal drinking age to 21 now calls his actions "the single most regrettable decision" of his career.

Dr. Morris Chafetz, a psychiatrist who was on the presidential commission in the 1980s that recommended raising the drinking age to 21, made his remarks in an editorial that he is shopping for publication and which he released to the advocacy group Choose Responsibility. Chafetz wrote the editorial to mark the 25th anniversary of the law that was signed by President Ronald Reagan on July 17, 1984.

"Legal Age 21 has not worked," Chafetz said in the piece. "To be sure, drunk driving fatalities are lower now than they were in 1982. But they are lower in all age groups. And they have declined just as much in Canada, where the age is 18 or 19, as they have in the United States."

Chafetz said the law instead has resulted in "collateral, off-road damage" such as binge drinking that occurs in underage youth and crimes like date rape, assaults and property damage.

The reduction in drunk driving shows how much promoting responsible playing works so much better as a social health strategy than trying to ban playing altogether. (And the rising teenage pregnancy and STD rates show how the abstinence-only strategy being prioritized over the "play safe" strategy failed utterly when it comes to sex.) It's basic human psychology. If something is utterly forbidden, people who indulge figure the crime's already committed, so they're less likely to think about making smart choices that keep them safe. But if there's a little breathing room for the idea that your fun isn't the problem, but some of the effects might be, people are much more willing to talk about making responsible choices. We know this is true when it comes to sex, and I'd argue that it's true when it comes to drinking. Drunk driving went down because the police prioritize drunk driving while largely ignoring public intoxication. More importantly, the public service campaigns---at least in Texas---focus on the driving aspect of drunk driving, and not the drinking aspect. (No doubt much to MADD's chagrin.) Ads that tell you to take someone's keys when they've had too many imply that friends who drink together can take care of each other. I'd suggest another thing that's changed dramatically since the 80s, and that's how TV approaches the subject of drinking. I remember when characters that weren't supposed to be derelicts on TV rarely, if ever, drank. But now, we see TV characters drink and often we even see them drunk, but that's also followed up by something that you didn't see in the 80s and early 90s---their friends arranging for drunk people to get home safely. Shows like "Sex and the City" and "The Office" come to mind immediately as shows where I've seen characters a) get drunk and b) not drive in a very visible way. They either get a ride from a friend or take a cab. That sort of thing has helped normalize the idea that it's okay to get a ride, and you don't have to deny that you're drunk when you are. Certainly, in the past 14 years I've lived in Austin, I've seen a dramatic shift in people's behavior towards finding ways to get home that don't involve driving.

Call it the bend-don't-break approach, and we need to start applying it to teenage drinking.