So, that was fun 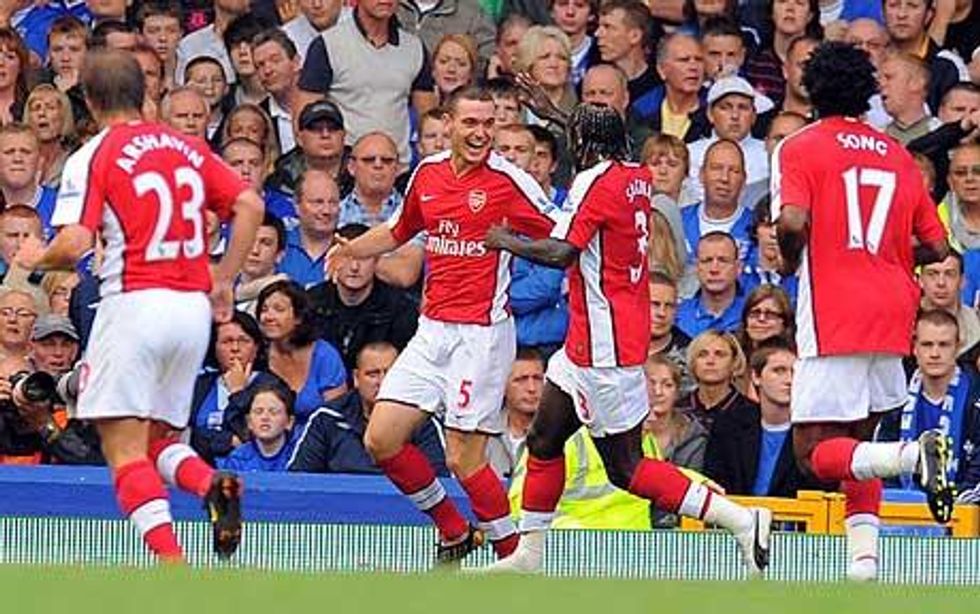 I couldn't have dreamed of a better start to the season. My thoughts on the game:

Thomas Vermaelen looks like the real deal. It's only one game but the newly-acquired Belgian was very impressive. He won several balls in the air, made one-on-one stops in his third, won corners, filled the gap for other defenders when he should have, and threw his body around. I was a little skeptical when they purchased him because he was listed at 6'0 and I thought we needed someone with more size; he clearly plays bigger than 6'0. The question-mark-guys played great. If this is the roster we're going with, Bendtner, Song, and Denilson are going to have to step up their performance from last season and they definitely did that yesterday. Bendtner set up the first goal by winning the ball in the air, cutting up a guy, and then passing off to Cesc (who set up Denilson). He won several other balls, drew fouls (including one to set up the second goal), hustled back on defense, and showed more dribbling skill in the final third. I wasn't thrilled when I saw him in the midfield position to start the game but proved very worthy; he's our only capable aerial target so if he plays like he did yesterday, he will be getting a lot of playing time.

Alex Song did exactly what we need him to do. He won some balls in the air, started some counter-attacks, and prevented the opponent from getting things going in midfield. Nothing that will show up in the fantasy stat sheet but yeoman's work nonetheless. Denilson scored a goal I did not think he was capable of. He followed it up by clearing the goal line on an Everton corner (their only real scoring chance when the outcome was in doubt). He made some good upfield passes and also contributed to the overall feisty-ness of the squad. If these three guys can maintain anywhere near this level of play, look out.

Team chemistry looked good. Sure, it's easy for the team to look like they like each other when they score six goals but the reactions to the first and second goals were great. The rest of the guys seemed real happy for Denilson when he scored. They seemed to be more in tune with one another than any other team I saw this weekend. Chemistry isn't as important as talent (Chelsea's won a few trophies with guys who don't seem to care for one another) but it's a good thing to have.

This wasn't our best team. Nasri and Walcott, two guys who should start most games when healthy, did not play and Arshavin wasn't as sharp as he can be. He did start the action on my favorite goal of the game with a sweet between-the-legs pass (one of three between-the-legs plays on that run) to Denilson and hit the post late which Eduardo knocked in for #6. It'll be interesting to see how Wenger balances playing time when he has a full roster (a fun problem to have); the aforementioned chemistry should have a positive role when dealing with this.

Now, back to reality. The team has a tough Champions League test on the road Tuesday at Celtic with no margin for error. Denilson, Song, and Bendtner have had good games in the past but have yet to show consistency. The squad is still woefully thin at certain positions; with Djourou injured and Senderoos still rumored to be on his way out, we're one Gallas or Vermaelen injury away from having to play the Geriatric (Sylvestre). There's no one to fill Song's role if he goes down or when he goes to the ANC in January. Yesterday was a great result that I enjoyed thoroughly but I'm going to wait until the away United game at the end of the month before I get too excited. It could be a lot worse; I could be a Liverpool fan right now.