Bamboo Review: The Invention of Lying 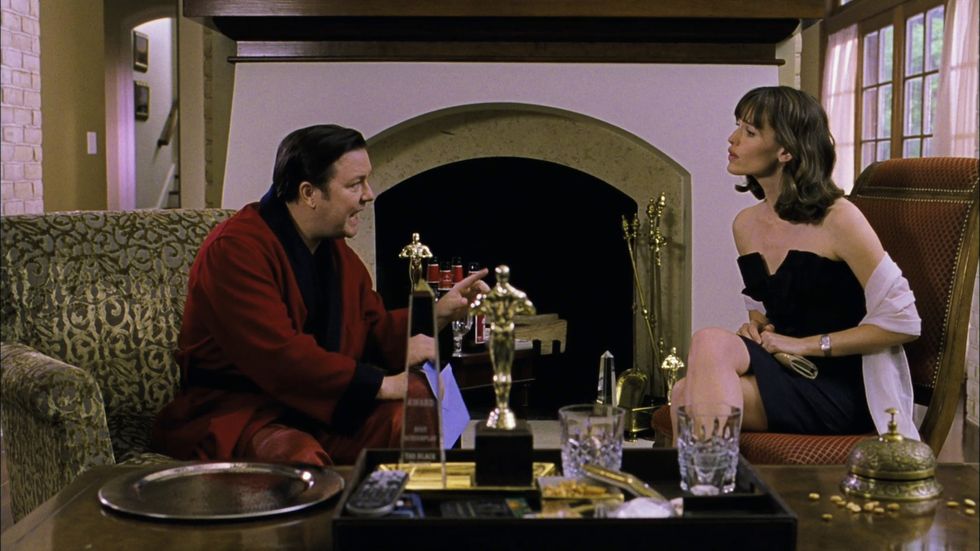 A number of folks requested a review of the new Ricky Gervais movie The Invention of Lying, and I'm a big fan of Gervais (especially his podcast), and so we went to see it last night. And it's one of the most clear-cut examples I've seen in a long time where a movie is brilliant for the first half, and then completely falls apart in the second half, and it's especially disappointing to see Gervais---who created realistic and even touching romances on his TV series "The Office" and "Extras"---pull out an egregious Nice Guy® storyline. Plus, Jennifer Garner's character would have been more fun if it were Tina Fey, instead of shoving the latter into a minor role as a secretary. Though admittedly, one the points of Garner's character is she's outrageously beautiful, and so maybe their hands were tied. But then again, the part blew, which I'll get to, so they should have rewritten it and cast Fey, if she'd have them.

This one might make the perfect rental, then. The first half really sparkles and plays with concept in interesting ways. See, the movie takes place in a world where there's no concept of lying whatsoever. And that's a broad definition of lying, too. There is no fiction, no acting, no lying by omission, no euphemism, and there doesn't appear to be much in the way of fantasy. In one scene, Gervais's character asks his friend what they'd do if they could do anything in the world, and it's clear that this kind of fantasizing is largely beyond their abilities, because in this world, there isn't such thing as things that aren't true. There's not even words for true or false. People say exactly what they're thinking, without even considering an alternative. (My favorite really might be the cop who states what his bribe is up front, and notes that he has an expensive cocaine habit to pay for to two men he's pulled over for drunk driving.) There aren't really movies, but just film reels of someone reading interesting stories from history. Advertising is also a lean industry. People order things in restaurants by saying, "I'll have the salad, because I don't want to get fat," or, "I'll have the filet because I like to show off that I can afford it."

Of course, what happens is Gervais's character figures out how to say things that aren't literal descriptions of of the physical world. In other words, he learns to lie, and he does so in a world where everything he says is automatically believed, because there's no reason not to believe someone if there's no such thing as lying. Like in many superhero movies---and make no mistake, in this world, his is a superpower---the first half where he tests the limits of his new power are the best scenes. Except that he's testing the moral and ethical limits. Initially, he is only thinking of himself, but when he actually tries to see if he can use this power to get a woman in bed, he suddenly realizes that there are situations where it's never, ever acceptable to lie. (The ad sadly reduces this to a cheap rape joke, but it's not like that at all, and I'd be shocked if Gervais went there.) After that, he realizes he can lie for good reasons, that white lies and comforting rhetoric can give hope to the hopeless. Overall, it's an interesting examination of how not-trueness is not a black and white issue. But it's also true that lying to people to make them feel better has its limits. It's one thing to tell a suicidal man that things are going to get better, even if you have no reason to believe that. But it's another thing to tell people there's life after death and a man in the sky that has a plan.

Oh yes, this movie takes on religion. And it does it in a surprisingly nuanced, generous way, even while basically sending the message that religion is a big pile of horseshit. Of course, I imagine a lot of religious people won't see it that way, because when Gervais's character ends up inventing religion, it lacks any kind of subtlety, and instead he just makes shit up like, "Everyone gets a mansion when they die." But that's because the running joke is that Gervais isn't a very good liar, even though he's the world's only liar, or maybe because he's the world's only liar. After all, no competition means that you don't really have to work to make your stories believable or engaging; they just have to be a little more pat than reality. What you do see is that the urge to believe in life after death is sympathetically portrayed, as is the urge to lie to people and tell them there's a god and heaven. But you also see all the ill effects of the lie, and there's even a little swipe at the way that men given the power to speak for god will often use that to control female sexuality.

So all that's great, but man, it takes a turn for the slow and tedious towards the end. Because the movie is propelled forward by a romance, of course, and it's one of the most baffling romances in the rom com genre that specializes at dishing up baffling romances. See, the entire movie, Gervais's character pines for Jennifer Garner, who is presented as having no redeeming qualities outside of the fact that she's beautiful and not an evil monster. Over the course of the film, we discover that she is stupid, shallow, and has no sense of humor outside of the ability to laugh at some of the things Gervais says. It's tempting to say that everyone in their world is that way, because there's not even a modicum of deceit, but they go out of their way to make it clear that she literally has no concept that there's more to people than surface appearances, and that other people don't have this problem. Their world has love and desire in it, and people are perfectly capable of valuing things other than how much money you make or how strong your jawline is. But her character doesn't, and when she starts to find herself valuing other things besides status and looks, she's portrayed as too fucking stupid and simple to grasp what's going on.

The worst part is that it didn't have to be this way. They could have made the love interest someone with redeeming qualities, so that you actually rooted for them as a couple, instead of being asked to root for Gervais to finally get that hot piece of ass he so richly deserves because he earned it by tolerating her company long enough to befriend her, even though she's a maddeningly shallow person. In fact, because of this plot, the only reason he doesn't come off as maddeningly shallow is she is so shallow that everyone else looks good in comparison.

To make it all worse, Garner is an incredibly distracting presence, in part because her botoxed mouth is pursed out so far it's unnerving, and in part because she portrays the character like a imbecilic alien, whose understanding of the world is on par with someone who got here yesterday, and is slow on the uptake to boot.

It's a real shame, because the first half of the movie was laugh out loud hilarious, and it really had an interesting, thought-provoking concept, too. It's a real shame to see it get dragged down with Nice Guy® bullshit, especially since Gervais has a history of writing about friendships that drift into love where you're actually rooting for the couple, flaws and all.