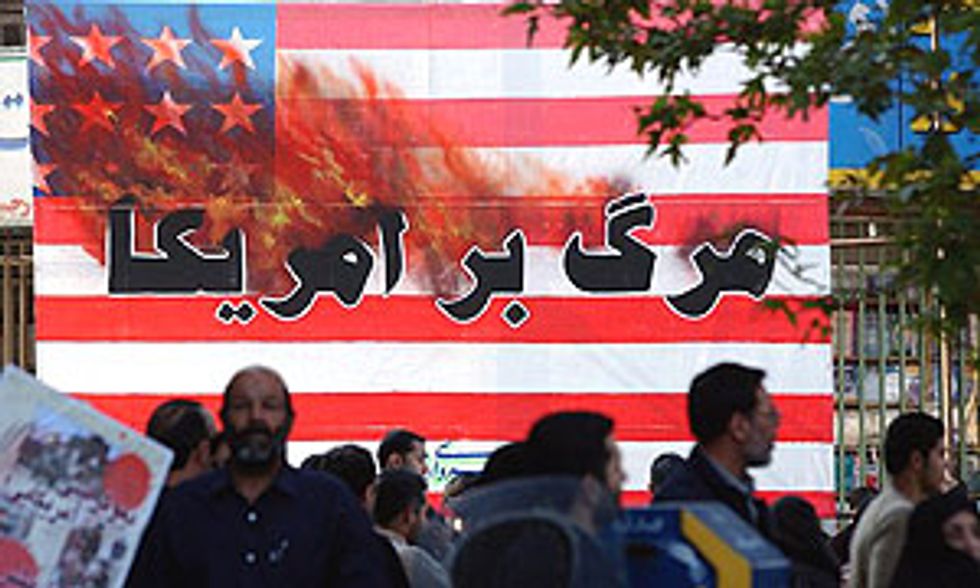 Comedy Central's Stephen Colbert is upset that Iran's "Death to America" day, which celebrates the 1979 kidnapping of US embassy hostages, has become "too commercialized."

"Now, I'm a 'Death to America' originalist," Colbert said. "I believe it is a day when Iranians from all walks of life should come together and burn an effigy of the US president then put on their Michael Jackson t-shirts and march through the streets denouncing western culture."

Colbert said Iranians were more interested in the "Ayatollah Kha-maniac" mall sales than attacking the US these days.

He was further incensed after showing a video which had Iranians attacking Russia instead of America.

"The revolution is over but nobody told the Iranians," Colbert said, "or the Iranian nerd patrol" who have been championing an insurgent mathematician.

Mahmoud Vahidnia "has so far suffered no repercussions from the confrontation at a question-and-answer session between Khamenei and students at Tehran's Sharif Technical University," the Associated Press reports.

"I don't know why in this country it's not allowed to make any kind of criticism of you," Vahidnia said to Khamanei. "In the past three to five years that I have been reading newspapers, I have seen no criticism of you, not even by the Assembly of Experts, whose duty is to criticize and supervise the performance of the leader."

The AP notes, "Khamenei countered, 'We welcome criticism. We never said not to criticize us. ... There's plenty of criticism that I receive,' according to accounts in state media and on opposition Web sites."

"The boldness of Vahidnia's comments underlines how Iran's postelection turmoil has undermined the once rock-solid taboo against challenging the supreme leader," the AP reported. "During demonstrations, young protesters have frequently chanted 'Death to the dictator' — referring to Khamenei — and even 'Khamenei is a murderer.' Several high-ranking pro-opposition clerics have also been openly critical."

Sadjadpour said that this was an example of a peasant saying that "the emperor has no clothes," or in Iran's case, "the mullah has no beard."

After being informed by Sadjadpour that Russia is now considered "the Great Satan" in Iran, Colbert bitterly complained that they "steal everything."

This video is from Comedy Central's The Colbert Report, broadcast Nov. 10, 2009.