Weird moments in Thanksgiving politics... and then some 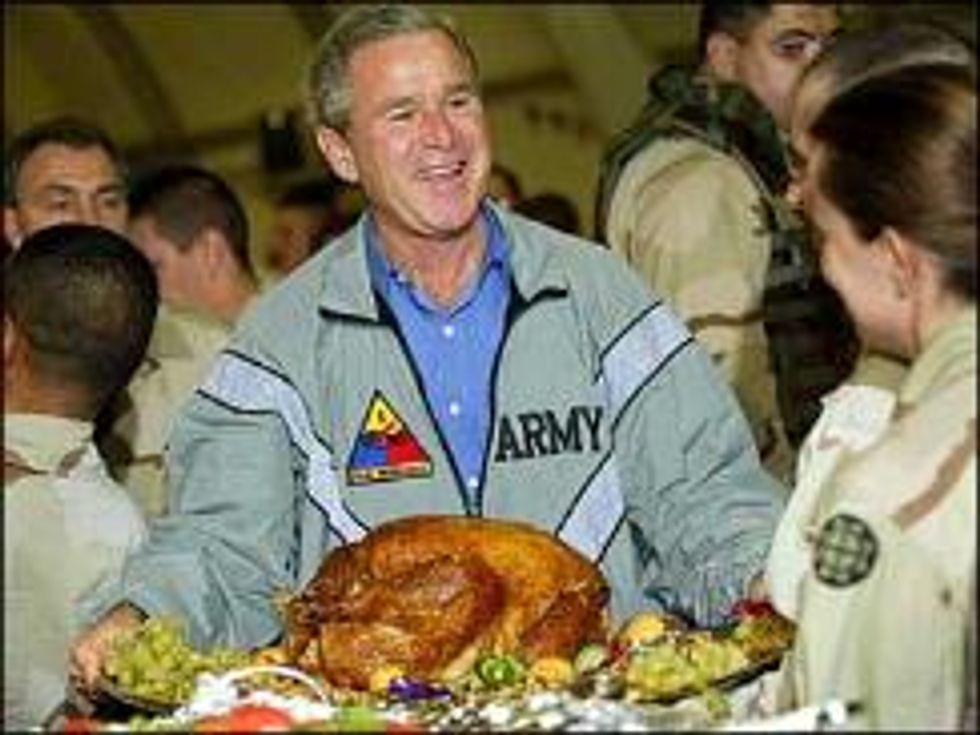 Politico's Alexander Burns takes a look "at some of the most dramatic, consequential, or just plain weird political moments that have colored Thanksgivings in recent years."

Burns first notes how President George W. Bush "raised the bar with a surprise trip to Baghdad, where he helped serve Thanksgiving dinner to U.S. troops eight months after the invasion of Iraq."

"Stunning troops with his appearance in a mess hall, where civilian administrator Paul Bremer and Gen. Ricardo Sanchez were scheduled to read a holiday proclamation from the commander-in-chief, Bush deadpanned: 'I was just looking for a warm meal somewhere,'” Burns writes.

Politico neglects to mention the controversy that ensued over the turkey that Bush was photographed carrying. After the Washington Post claimed that sources said it was fake, the reports went back and forth.

While most on the left tend to believe the initial reports that the turkey was fake, conservatives maintain that The New York Times finally got something right when they published a correction and said it was real.

Last November, shortly after losing the 2008 presidential elections, Palin staged an impromptu press conference after pardoning one lucky bird, but a worker at the Triple D Farm and Hatchery in Wasilla sliced a turkey's neck, bled it out and twisted its head off behind the governor, directly in the camera's line of fire.

A reporter asked Palin if she was okay with the backdrop. The Alaskan Governor answered, "no worries." As the bird's head was removed, the man looked over his shoulder at the governor and reporters and flashed a toothy grin.

"I was happy to be invited to participate in, in this, and, uh, and, you know, for one, you need a little bit of levity in this job, especially with a, uh, so much that has gone on in the last couple of months that has been so, um, political, ah, obviously, that it's nice to get out and, and do something to promote a local business and, and to uh, just participate in something that isn't so, um, heavy-handed politics that, uh, invites criticism," said the governor in what appeared to be a single sentence.

"Certainly we'll even invite criticism for doin' this too, but at least this was fun!" she pronounced.

The unappetizing footage drew mockery on cable news and became an instant YouTube classic, drawing hundreds of thousands of hits. The infamous episode even warranted a mention in her recently-released book; Palin attributed the incident to an “odd camera angle” and noted: “The photographer couldn’t post it to the Web fast enough.”

Politico left at least one weird Thanksgiving political moment off of their list.

It's a quick clip, so watch for it at the end. Georgia Senator Saxby Chambliss wraps up his feel-good Thanksgiving address and grabs his granddaughter, who's sitting on his knee, in exuberant affection. Here's the problem: He grabs her boob. She's a little girl, no denying, but this isn't just some accidental brushing. We're talking straight-up cuppage. This is now blog fodder because, inexplicably, it hit the airwaves, leading me to speculate: Were his aides too scared to ask him for a second take?

"Sir, we need to do it one more time," the aide stammers. "You groped your own granddaughter."

To be sure, an awkward subject to broach.

"Guess we'll know tomorrow if an errant and accidental boob-grab is enough to derail an election," Hargrove wrote.

Democratic challenger Jim Martin ended up losing by three points that day, but since Chambliss didn't win a majority, a run-off was held, which the Republican handily won on December 2.