Perhaps US Army cadets are being told to "read 'em if they got 'em" these days.

Photos of West Point cadets catching up on book reading as they waited for President Obama to deliver his long-awaited address on the war in Afghanistan Tuesday have been circulating all over the Internet.

The Drudge Report has the following Reuters photo near the top of his site with the caption "Cadet read 'Kill Bin Laden' book at Obama speech..."

The Examiner reports that the photo can be seen on the cover of the Wall Street Journal.

"Kill Bin Laden" is the book in the cadet's hands. Talk about some free advertising for the publisher. The Wall Street Journal is the country's top-circulating paper.

"Kill Bin Laden" is an eyewitness account of the Battle of Tora Bora told by "Dalton Fury," a pseudonym for a former Army major who led the Delta Force covert mission and whose goal was to kill Osama bin Laden just weeks after the 9/11 terrorist attacks.

"The irony is that had Fury's mission succeeded -- Fury told '60 Minutes' (link) that Delta Force's original plan to attack bin Laden from Pakistan was rejected by someone higher up the chain of command -- this cadet very likely would not have been sitting in this auditorium waiting for a president to announce the deployment of more troops to fight this war," Freehling writes.

The UK Times Online has a story entitled "Conservatives hail West Point cadet who read 'Kill Bin Laden' - but who is he?"

Officials at West Point would not identify the cadet today, but his choice of reading material was hailed on conservative websites in the US as a rebuke to President Obama’s circumscribed new strategy for Afghanistan, which does not specifically target bin Laden and makes no mention of the word “victory”.

The picture was taken in the academy’s Eisenhower auditorium an hour and a half before Mr Obama took the podium there for his address to the nation on Tuesday night. For security reasons, cadets were seated four hours before the speech and many brought reading and study material, an academy spokesman said.

Another photo shows a cadet reading David Grossman's "On Killing: The Psychological Cost of Learning to Kill in War and Society."

Drawing on interviews, published personal accounts and academic studies, Grossman investigates the psychology of killing in combat. Stressing that human beings have a powerful, innate resistance to the taking of life, he examines the techniques developed by the military to overcome that aversion. His provocative study focuses in particular on the Vietnam war, revealing how the American soldier was "enabled to kill to a far greater degree than any other soldier in history." Grossman argues that the breakdown of American society, combined with the pervasive violence in the media and interactive video games, is conditioning our children to kill in a manner siimilar to the army's conditioning of soldiers: "We are reaching that stage of desensitization at which the infliction of pain and suffering has become a source of entertainment: vicarious pleasure rather than revulsion. We are learning to kill, and we are learning to like it." Grossman, a professor of military science at Arkansas State University, has written a study of relevance to a society of escalating violence. 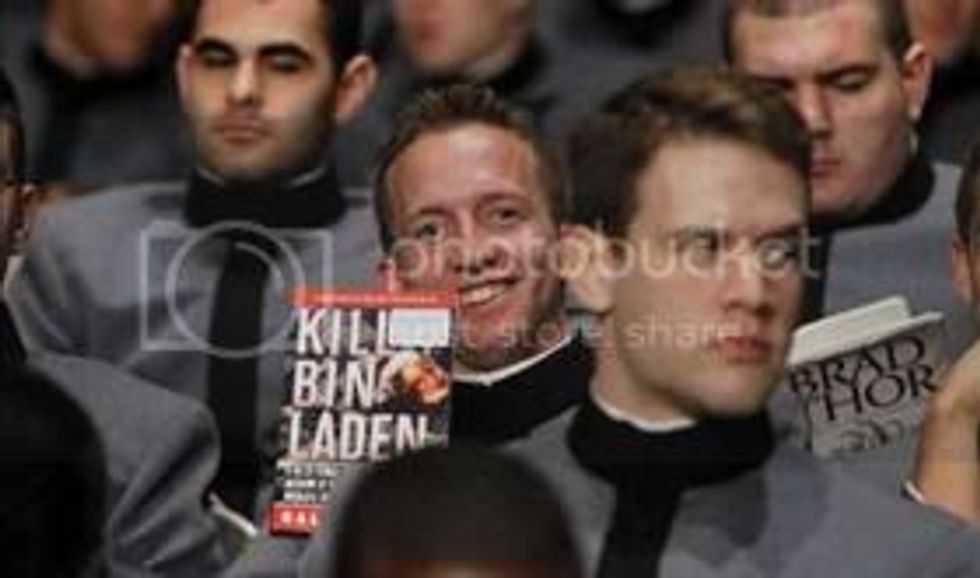 However, a photo with a glimpse of a book being read by a cadet sitting behind the "Kill Bin Laden" reader might have been of more interest to conservative readers (though at least one conservative blog spotlighted it).

That book, Brad Thor's The Apostle, according to another Publisher's Weekly excerpt at Amazon.com, deals with "Robert Alden, the new and naïve U.S. president, [who] has just taken office with a landslide victory, due mainly to the assistance of strategist Stephanie Gallo, who 'delivered the mainstream media for him on a silver platter.'"

When Gallo's daughter, a doctor working in Afghanistan, is kidnapped, Gallo turns to Alden for help, and he, in turn, calls on Harvath, a former Navy SEAL and intelligence operative. Since the kidnappers are demanding the release of one of Osama bin Laden's lieutenants, Alden can't be seen to be negotiating with them. Thus Harvath must carry out his tricky assignment without official sanction. Meanwhile, Secret Service agent Elise Campbell, troubled by a conversation fragment she overheard indicating that Gallo has serious dirt on the president, launches an off-the-books inquiry into the pre-election death in a car accident of an attractive aide to Alden. The overseas rescue operation is more plausible than the stateside plot, but that's not saying much.

An Amazon commenter complained, "If you only read the exciting Afghan adventure of Scot Harvath, this is a fun and informative book. But you have to skip all the parts where the author, in an unrelated and superfluous sub-plot, has the President (a poorly-veiled caricature of Barack Obama) engaging in an adulterous affair, manslaughter, and perjury. The only reason this sub-plot is included is to slander the current President of the United States. I will not buy another Brad Thor book. If I wanted anti-Obama screeds (I don't) I would listen to Rush Limbaugh or watch Fox News."

Referring to Thor as one of "one of my favorite fiction thriller writers," Fox News pundit Glenn Beck has invited him on his shows a number of times through the years.

In June, Beck asked Thor, "How safe are our troops under this administration, where we just sold $108 billion line of credit for the photos of Abu Ghraib? Did you know that?"

Thor complained that "we are projecting weakness left, right and center" and that "socialism...is the end goal of the Democratic Party."

Thor has also claimed to have received "multiple death threats."

The author of the best-selling new thriller, "The Last Patriot," says his life already has been threatened for contending the Muslim holy book contains errors and is not based on the last revelations of Muhammad.

"I've already had multiple death threats come in, and that's something that we're taking very seriously with the tour coming up," said Brad Thor, whose "Patriot" already has climbed to No. 1 on the Amazon fiction list after its release last week.

Friends have warned Thor that his book will be viewed as blasphemous by Muslim fundamentalists.

"You're going to have a fatwah on you" like Salman Rushdie, said CNN's Glenn Beck, a family friend. "This is the kind of stuff that's going to get you killed."

Thor complained to WND that "Islam is getting a free pass," and that "I hear all the time about Islam being a religion of peace and I thought, wow, that's weird, there's so much violence in there."

Just recently Thor Tweeted about "Obama's Muslim problem," and linked to a Slate article by Jacob Weisberg that claimed the "president's heritage feeds a broader suspicion that he is too casual about the threat from America's Islamist enemies."

John J. Miller writes for The Corner on The National Review

Additional images show cadets with On Killing by David Grossman and The Apostle by Brad Thor.

This last book is the only one I know: Thor podcasted with NRO this summer. The novel includes an unflattering portrayal of an Obama-like commander in chief.

Asked directly if President Alden was "based on President Obama," Thor replied, "I’ll let the readers decide for themselves, John. There is a certain co-mingling of facts and fiction…most of my novels are written on facts…”

“If there are little bits of Obama there…I’ll let the readers decide for themselves,” Thor told NRO's Miller.

Without suggesting how he felt about the label, at his Twitter account, Brad Thor linked, writing, "My thriller ID'd as being anti-Obama." Atria Books, the publisher of Thor's The Apostle, also Tweeted.

At his Facebook account, Thor noted that he was "looking forward to meeting the West Point cadet from Tuesday's picture."

Thor wrote, "The treat will be all mine and you bet he's going to get signed books. That would be the very least I can do. What honor this will be for me."