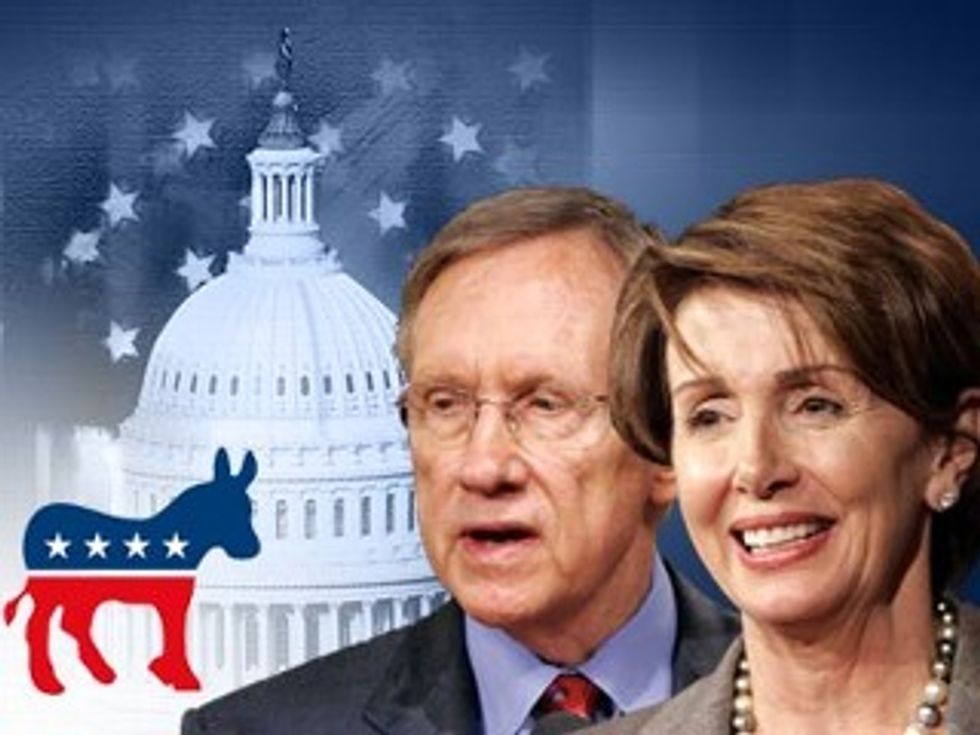 Democrats have conceded they can no longer pass healthcare on their own, ensuring that their key legislative reform either dies or accepts further compromises to gain approval from Republican members.

What's more, they've decided to outline their case to the public through a set of talking points issued to Democrats after Tuesday's election upset in Massachusetts.

Their meme? "It is mathematically impossible for Democrats to pass legislation on our own."

The approach was endorsed despite the fact that Democrats hold a sizable majority in both the House and Senate. The Senate majority is considerably larger than the majority Republicans held over Democrats for much of President George W. Bush's second term (2005-2007), when Republicans had 55 Senate seats.

MASSACHUSETTS ELECTION MEANS THAT SENATE REPUBLICANS HAVE MORE RESPONSIBILITY TO GOVERN, NOT OBSTRUCT

· We welcome Scott Brown to the Senate.

· While Senator-elect Brown's victory changes the political math in the Senate, it does not change the challenges are country faces or the need to address them.

· We remain committed to strengthening our economy, creating good paying jobs and ensuring all Americans can access affordable health care.

· Senate Republicans have an obligation to the American people to join us in governing our nation through these difficult times and to help clean up the mess they left behind.

· It is mathematically impossible for Democrats to pass legislation on our own. Senate Republicans to come to the table with ideas for improving our nation and not obstructionist tactics.

· Saying "no" might be a good political strategy but it does nothing to create jobs or help improve the lives of struggling Americans.

· We understand that there is great anger, anxiety and frustration among voters as the economy continues its recovery. That is why Senate Democrats will continue to do everything that we can to strengthen our economy, put Americans back to work, reform Wall Street and address the health care crisis.

Republican Hypocrisy on Debt Limit Puts Our Economy, Seniors and Veterans at Risk

· Failing to raise the debt limit would undermine our nation's credit worthiness, badly weaken our economy and put Social Security and veterans benefits at risk.

o Republicans squandered those surpluses by spending wildly on massive tax breaks for the wealthy and special interests, leaving President Obama with a $1.3 trillion deficit on the day he took office last year.

· Now, as the time comes to take responsibility for those mistakes, Senate Republicans want to pass the buck.

· Senate Democrats didn't create this problem - we are simply cleaning up the fiscal mess that we inherited from the last Administration in order to avoid the economic catastrophe that would be created if the United States defaulted on our debt.

· When they were in control, Senate Republicans voted seven times to raise the debt limit and refused to pay for the costs of major initiatives. Their claims of fiscal purity do not square with their record of wasteful spending and excess.

· Increasing the debt limit does not authorize a single penny of new spending - it allows the government to pay bills already incurred.

· Standing against this measure would demonstrate yet again that Senate Republicans have no real plan to solve our nation's economic challenges they helped create.

· Republicans, now more than ever, have a responsibility to work with us to move our nation forward with economic policies that continue us on the path to recovery.