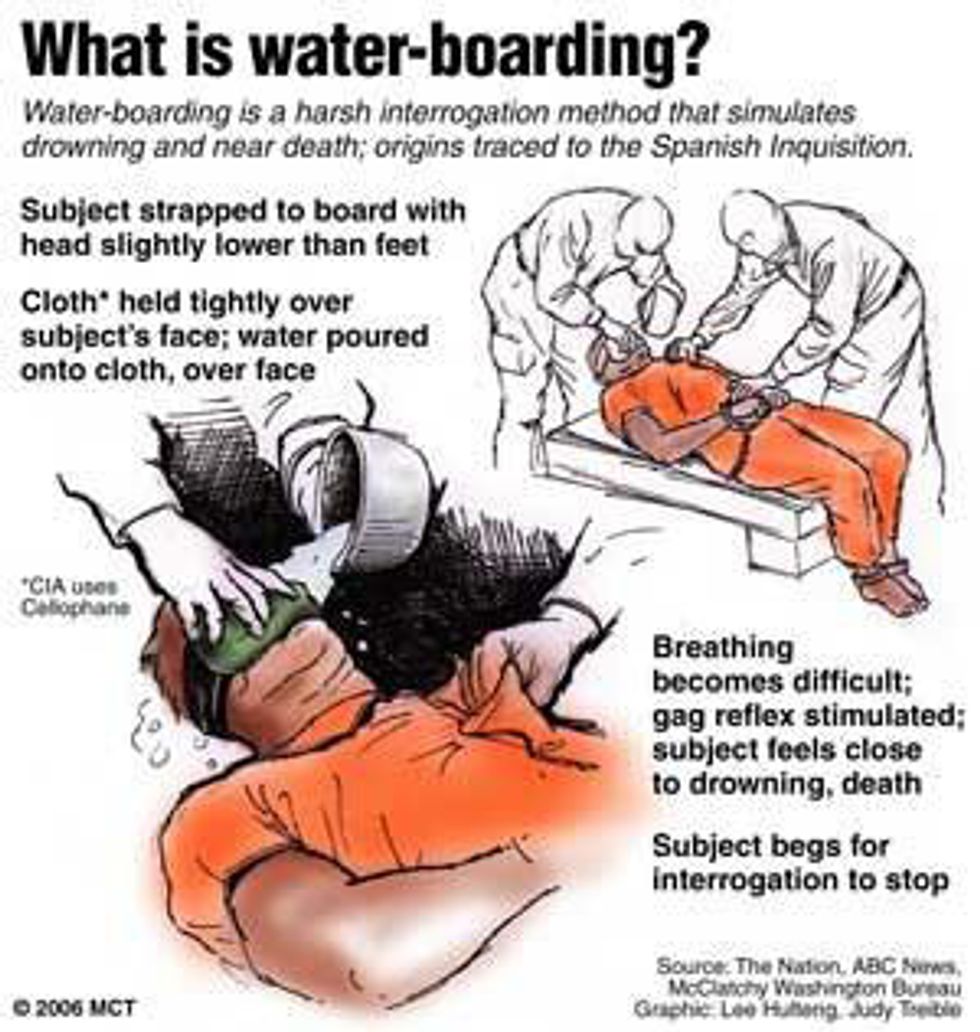 The Republican state senator vying to fill the Senate seat recently vacated by the late Sen. Ted Kennedy (D-MA) says he doesn't believe waterboarding -- where a suspect is effectively temporarily drowned -- is torture.

State senator Scott Brown's candidacy has taken Massachusetts by storm and political analysts by surprise. Until recently, Democratic state attorney Martha Coakley was considered a shoe-in for the position. But Massachusetts independents have apparently grown so frustrated with Democrats in Congress, and so tepid on Coakley's candidacy, that they may send a Republican to the Senate who seems to contravene many of the state's apparently liberal ideals.

At a press conference in early January, for example, Brown said that the US should continue to employ waterboarding against terrorist suspects, a technique considered torture for which the US executed Japanese soldiers during World War II.

Speaking of Umar Farouk Abdulmutallab, 23, the Nigerian attempted "Christmas bomber," Brown said that the would-be terrorist should be subject to “our rules of engagement and laws of war,’’ and not be tried in civilian courts.

Noted the Boston Globe, "Brown asserted that waterboarding does not constitute torture, but he did not specifically say Abdulmutallab should be subjected to waterboarding.

According to the Globe, Brown was previously a military lawyer in the Massachusetts National Guard.

The Boston Herald, Boston's more conservative local tabloid, referred to waterboarding as "simulated drowning," and that Brown's support for the technique comes "despite the president’s recent decision to ban the use of simulated drowning to gain information from enemy combatants."

Brown's Democratic opponent opposes simulated drowning and argues that suspected terrorists can and should be tried in civilian courts.

The human rights lobbying group Human Rights Watch outlined its assertion that waterboarding was torture in a letter to former Bush Attorney General Alberto Gonzales in 2006.

"Waterboarding is torture," the group wrote. "It causes severe physical suffering in the form of reflexive choking, gagging, and the feeling of suffocation. It may cause severe pain in some cases. If uninterrupted, waterboarding will cause death by suffocation. It is also foreseeable that waterboarding, by producing an experience of drowning, will cause severe mental pain and suffering. The technique is a form of mock execution by suffocation with water. The process incapacitates the victim from drawing breath, and causes panic, distress, and terror of imminent death. Many victims of waterboarding suffer prolonged mental harm for years and even decades afterward."

Human Rights Watch argued that the measure violated US and international laws.

"Waterboarding, when used against people captured in the context of war, may also amount to a war crime as defined under the federal war crimes statute 18 U.S.C. § 2441, which criminalizes grave breaches of the Geneva Conventions (in international armed conflicts), and violations of Article 3 common to the four Geneva Conventions (in non-international armed conflicts)," the gruop wrote. "Waterboarding is also an assault, and thus violates the federal assault statute, 18 U.S.C. § 113, when it occurs in the 'special maritime and territorial jurisdiction of the United States,' a jurisdictional area which includes government installations overseas. In cases involving the U.S. armed forces, waterboarding also amounts to assault, and cruelty and maltreatment under the Uniform Code of Military Justice.

"Under the laws of the land, U.S. personnel who order or take part in waterboading are committing criminal acts—torture, assault, and war crimes—which are punishable as felony offenses," they added. "The Department of Justice should clarify this to all U.S. personnel, and prosecute violations of the law."

Should Brown be elected, he will be the first Republican to occupy the seat since Henry Cabot Lodge, Jr. Lodge held the seat until 1953, when it was taken by John F. Kennedy.