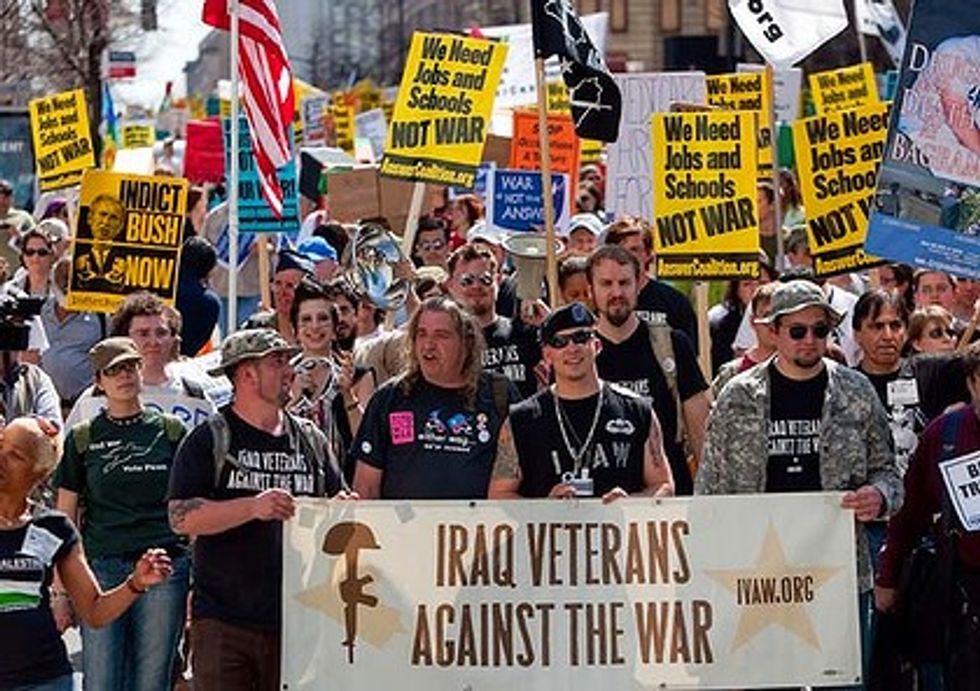 As hundreds of anti-war protesters demonstrated around the White House during the seven-year anniversary of the war in Iraq, police arrested at least five people involved with the rally. The Washington Post reports the number arrested could be as high as eight.

The protesters delivered symbolic coffins covered with several national flags to the offices of Halliburton and the White House. Police arrived soon after demonstrators began laying down next to the coffins.

The crowd carried signs with messages like "Indict Bush now" and "We need jobs and schools not war." One Iraq war veteran burned a small American flag on stage while shouting "this is not my country."

Some publications reported thousands of protesters, and not hundreds, but most stories agree that the protesters feared the country's wars in Iraq and Afghanistan were being forgotten as domestic issues like health care carry the public's attention.

"A huge part of the antiwar movement has been focused on the Bush administration and its policies in Iraq and Afghanistan," said Brian Becker, national coordinator of the ANSWER Coalition, which organized the march. "Bush is gone. Millions of people thought his exit would mean an end to these wars. Instead, after one year of real-life experience, they're far from ending."

The fears of the protesters may not be unfounded. This year saw far fewer protests against the wars than in years past.

Princeton University historian Sean Wilentz acknowledged that he didn't remember Saturday's significance. He said Americans can be forgiven for not having remembered March 19 as an important date.

"Unlike Sept. 11 or unlike Dec. 7, 1941, it was not a war that began with a traumatic event," said Wilentz. "There was a long buildup to it. There was a lot of debating back and forth. ... There wasn't quite the sense of drama, shall we say, of the event itself, even though there were lots of dramatic events that happened that night."

But in the capital, the date of the Iraq invasion was far from forgotten.

Chanting "We are the change," the D.C. rally included speeches by politician/journalist Ralph Nader and activist Cindy Sheehan.

Nader called Bush and Cheney "fugitives from justice," arguing that the military presence in the Middle East was creating more enemies for the US.

In Iraq, the anniversary of the war was met with much less "fanfare," the Washington Post reported, as Iraqis simply "went about their business, looking to the future with a mixture of trepidation and hope."

"Now we have democracy and freedom, but the cost was dire and Iraqis have paid that price," said Raid Abdul-Zahra, 38, a technician in Najaf.

As the graph below shows, troop deaths in Iraq have tapered off as the withdrawal deadline nears.