Gay soldier arrested after chaining himself to White House fence 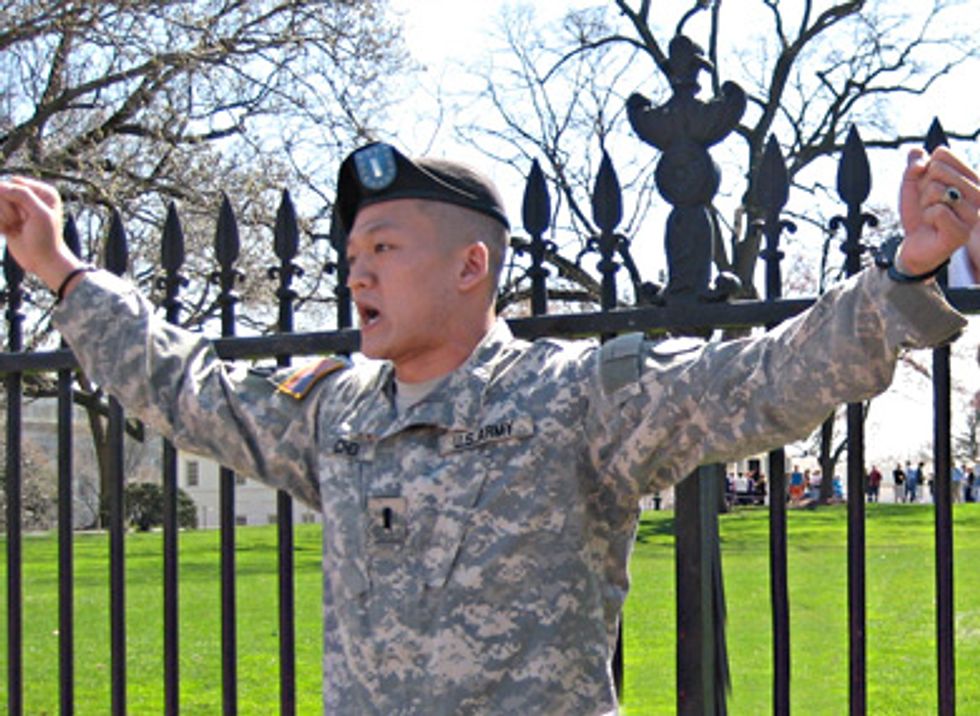 A prominent gay rights advocate and soldier being discharged under the Pentagon's "don't ask, don't tell" policy barring openly gay members of the military from serving openly was arrested after chaining himself to the fence of the White House Thursday.

Following a Human Rights Campaign rally for DADT repeal at Freedom Plaza in Washington, Choi and Pietrangelo led about 100 protesters to the White House, where the two then proceeded to handcuff themselves to the gates. Pietrangelo was discharged from the military under the gay ban, while Choi's discharge is pending. Choi is the founder of Knights Out, a West Point alumni organization supporting LGBT soldiers.

United States Park Police spokesman Sgt. David Schlosser told The Advocate that both men were taken to Park Police's Anacostia station for processing, where they were charged with failure to obey a lawful order. Choi and Pietrangelo will be held overnight and are scheduled to appear in D.C. Superior Court on Friday.

A group supporting Choi issued a statement on his behalf (via Pam's House Blend):

After participating in the Human Rights Campaign march on Freedom Plaza Thursday afternoon, former United States Army Lieutenant Dan Choi made a public statement and marched over to the White House to demand the Obama administration take a firm stance in repealing Don't Ask, Don't Tell.

Joined by former U.S. Captain Jim Pietrangelo, honorably discharged in 2004 under Don't Ask, Don't Tell, Lt. Choi made a public call to action in front of the White House. Their actions are a result of a general unrest among the LGBT community after Congressman Barney Frank confirmed this week that the White House has been "ambiguous" about repealing Don't Ask, Don't Tell this year.

The following statement was read by Lt. Choi outside Freedom Plaza before he set off to the White House:

"Hello. My name is Lt. Dan Choi. I am being discharged from the US Army because I am gay and dared to say it out loud.

Today, I am here on a mission with Capt. Jim Pietrangelo, and we are asking you all to join us. We're calling you to action because we are at a turning point -- a moment in time where talk is no longer enough, and action is required.

Equality is not going to happen by itself.

And if we don't seize this moment it may not happen for a very long time.

Some may tell you that I am one of the lucky ones. I have been welcomed back by my unit with open arms. And it would be easy for me to stay quiet and hope that change will happen.

But what I was taught at West Point and learned in war is -- hope is not a strategy. As officers, James and I both find it a dereliction of our moral duty to remain silent while thousands of our brothers and sister are not allowed to serve openly and honestly.

Capt. Pietrangelo was honorably discharged under Don't Ask, Don't Tell in 2004 and I will be subject to the same shortly. As officers we are here today fighting for those in the ranks, and we need our Commander in Chief to do the same.

Our fight is not here at Freedom Plaza, it is at the White House. We are walking to the White House right now to send the President a message. So...take out your cell phones and your cameras. Document this moment. Join us as together -- we make history."