The official Vatican line: the Pope is being set up 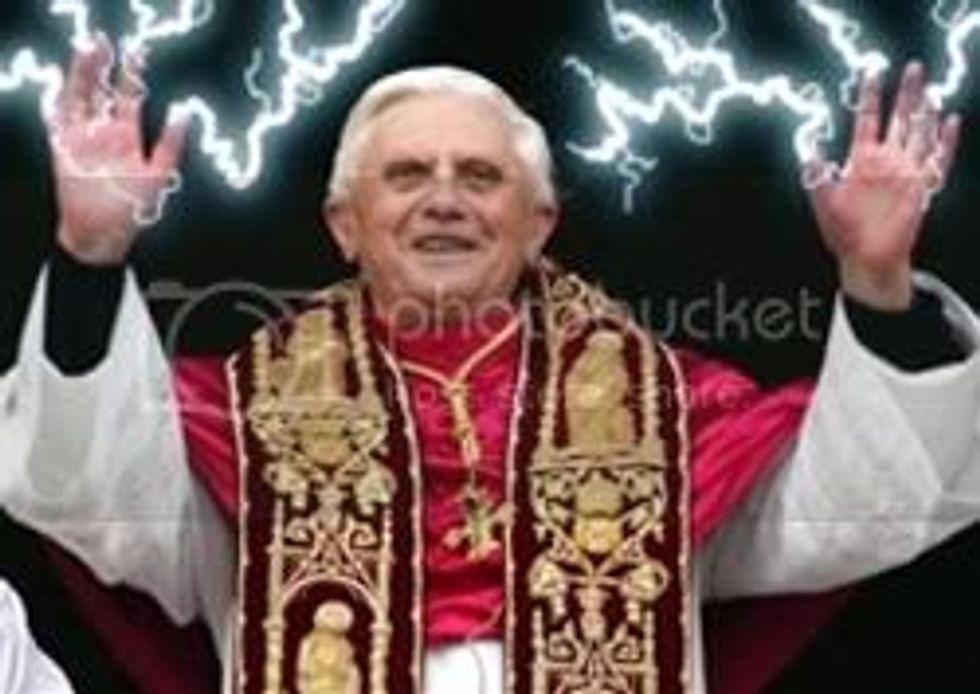 We're really heading into weird territory now. In what is supposed to be a defense of Pope Benedict from accusations of covering up pedophile priest cases, the Vatican spokesbots are handling this with complete ineptitude.

"It's rather clear that in the last days, there have been those who have tried, with a certain aggressive persistence, in Regensburg and Munich, to look for elements to personally involve the Holy Father in the matter of abuses," the Rev. Federico Lombardi told Vatican Radio.

"For any objective observer, it's clear that these efforts have failed," Lombardi said, reiterating his statement a day earlier noting the Munich diocese has insisted that Benedict wasn't involved in the decision while archbishop there to transfer the suspected child abuser.

Lombardi told The AP that "there hasn't been in the least bit any policy of silence."

"The pope is a person whose stand on clarity, on transparency and whose decision to face these problems is above discussion," Lombardi said, citing the comments by Scicluna, who works in the Vatican's Congregation for the Doctrine of Faith, which was long headed by Benedict before his election as pontiff.

"To accuse the current pope of hiding (cases) is false and defamatory," Scicluna said. As Vatican cardinal in charge of the policy on sex abuse, the future pope "showed wisdom and firmness in handling these cases," Scicluna said.

Wow. Do they think we've all forgotten how Cardinal Law was shipped out of Boston as he was about to face charges for abuse cover up, all the secret settlements? Amazing.

It is already clear that Catholic Church was covering up abuse cases as a matter of policy, thus the secrecy and the payouts. If the defense is going to be that poor Cardinal Ratzinger was forced to facilitate the coverup of child rape by priests because "everyone is doing it" or worse, that he never knew about it, will simply not fly. (NYT):

When a sex abuse scandal broke in Boston church in 2002, Pope Benedict — then Cardinal Ratzinger — was among the Vatican officials who made statements that minimized the problem and accused the news media of blowing it out of proportion.

As far as the Munich abuse cases and the decision to send a pedophile priest back out to work with children, something that the archdiocese claims Ratzinger knew nothing about, out comes the fall guy defense. That's not flying either.

The former vicar general took full responsibility for the decision to reinstate the priest to pastoral work. “I deeply regret that this decision resulted in offenses against youths and apologize to all who were harmed by it,” he said, according to a statement posted on the archdiocese’s Web site.

There was immediate skepticism that Benedict, as archbishop, would not have known of the details of the case.

The Rev. Thomas P. Doyle, who once worked at the Vatican Embassy in Washington and became an early and well-known whistle-blower on sexual abuse in the church, said the vicar general’s claim was not credible.

“Nonsense,” said Father Doyle, who has served as an expert witness in sexual abuse lawsuits. “Pope Benedict is a micromanager. He’s the old style. Anything like that would necessarily have been brought to his attention. Tell the vicar general to find a better line. What he’s trying to do, obviously, is protect the pope.”

This is really sad for those sick about what this is doing to the faithful, to see the hierarchy neck-deep in scandal.