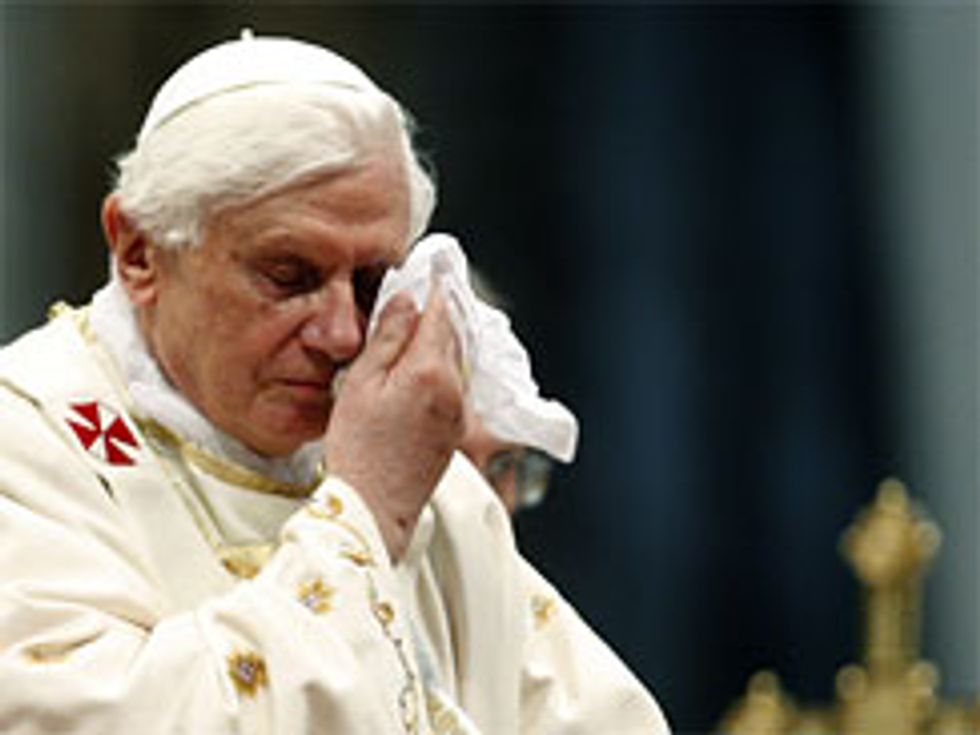 Pope Benedict XVI apologised Saturday for Irish priests' child sex abuse in a letter with far-reaching implications, but victims said it was not enough to address the growing scandal.

The pastoral letter, which came with the sex abuse scandal having spread to several countries, including the pope's native Germany, also said Irish bishops had "failed" in addressing the problem.

"You have suffered grievously and I am truly sorry," the pope said in the long-awaited letter to Irish Catholics to be read in all Irish dioceses, in which he also expressed "shame and remorse."

"I can only share in the dismay and the sense of betrayal that so many of you have experienced."

In the first pastoral letter to address the scandal, the pope said priests and religious workers guilty of child abuse "must answer" for their crimes "before properly constituted tribunals."

"Openly acknowledge your guilt, submit yourselves to the demands of justice, but do not despair of God's mercy," he said.

In the letter, signed on Friday, the pope harshly criticised the Irish episcopate in dealing with the allegations.

"You and your predecessors failed, at times grievously, to apply the long-established norms of canon law for the crime of child abuse," he wrote.

The pope, who met victims of abuse during trips to the United States and Australia in 2008, said he was ready to do so again.

"I know that nothing can undo the wrong you have endured. Your trust has been betrayed and your dignity has been violated," Benedict said.

The pope told offenders they had "betrayed the trust that was placed in you by young and innocent people" and "forfeited the esteem of the people of Ireland and brought shame and dishonour upon your confreres. Analysis:Hard line on paedophile priests was long in coming

"Together with the immense harm done to victims, great damage has been done to the Church and to the public perception of the priesthood and religious life," he added.

The pope also announced a mission to Irish dioceses affected by sex scandals that would include a review of their conduct.

Despite the letter's remorse and criticism of Irish Catholic officials, victims in Ireland said they deserved more after years of being denied justice.

"Victims were hoping for an acknowledgement of the scurrilous ways in which they have been treated as they attempted to bring their experiences of abuse to the attention of the Church authorities," said Maeve Lewis, director of the One in Four victims group.

John Kelly, of Survivors of Child Abuse and who himself was sexually abused as a boy in the Daingean Catholic care home, told AFP the letter left many questions unanswered.

"Is the pope now saying we will have a national inquiry into abuse in all the dioceses?" he said. "In short, the basic question is: are the victims likely to get justice as a result of what the pope has said?"

In the United States, where child abuse cases involving priests that began to emerge in 2002 led the US Roman Catholic Church to reach multi-million-dollar compensation deals, victims also criticised the letter.

"The pope offers words when action is so desperately needed," the Survivors Network of those Abused by Priests (SNAP) said in a statement.

The head of the Catholic Church in Ireland, Cardinal Sean Brady, said he hoped the pope's letter would lead to "a great season of rebirth." Related article: Irish church could be 'reborn' by Papal letter

Predominantly Catholic Ireland has been shocked by three judicial reports in the last five years revealing ill-treatment, abuse and cruelty by clerics and a cover-up of their activities by church authorities.

Since the Irish cases emerged, abuse scandals have come to light in the pope's native Germany, Austria, the Netherlands and Switzerland

The scandal has also inched closer to the pope as the Munich and Freising diocese said recently that he, while archbishop there, approved in 1980 giving Church housing to a priest suspected of child sex abuse while he received "therapy."

Germany's top archbishop said Saturday the letter should be considered a "warning" to his own country's Catholic Church, while Austrian Cardinal Christoph Schoenborn said it addressed the anger that "is not limited to Ireland."

A Dutch church spokesman said Saturday that at least 1,100 allegations of sexual abuse committed by members of the Netherlands' Roman Catholic clergy in the three decades from 1950 have emerged this month.