Kirsten Powers, a Fox News and Daily Beast contributor and former Clinton Administration official, became the latest women to jump on the anti-"Slutwalk" bandwagon following pop singer Rebecca St. James' assertion that women are "asking for sex if they’re dressed immodestly” and should refrain from doing so if they don't wish to be raped.

Powers, who also accused feminists of ignoring the needs of trafficked women by advocating against sexual violence with their "Slutwalk" protests, joined via Twitter this morning. Her beef: the use of the word "slut" -- which, actually, stemmed from the police officer who started the outcry.

In January, Toronto Police Service constable Michael Sanguinetti gave a speech to York University law students explained what he thought was one of the best ways to prevent rape: "You know, I think we're beating around the bush here. I've been told I'm not supposed to say this - however, women should avoid dressing like sluts in order not to be victimised."

Powers, however, is not a fan. This morning she Tweeted: 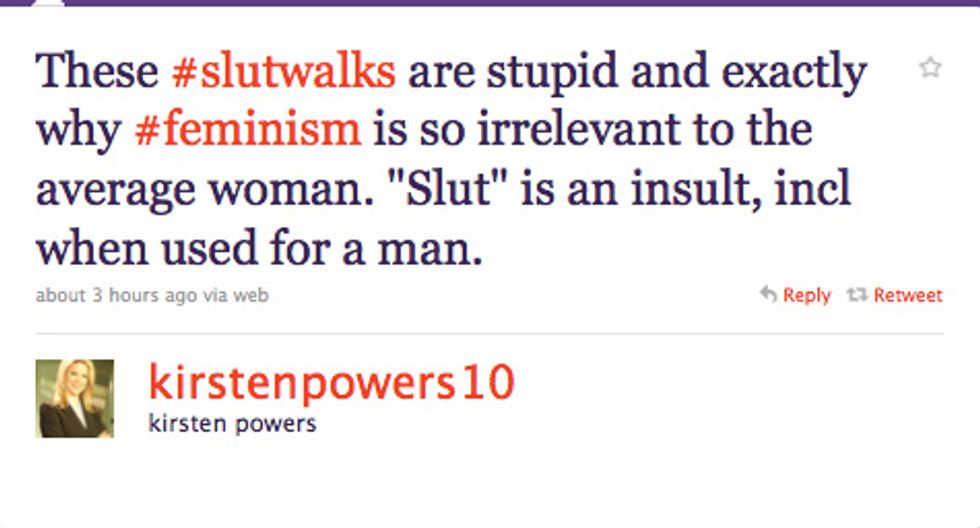 And then followed up with: 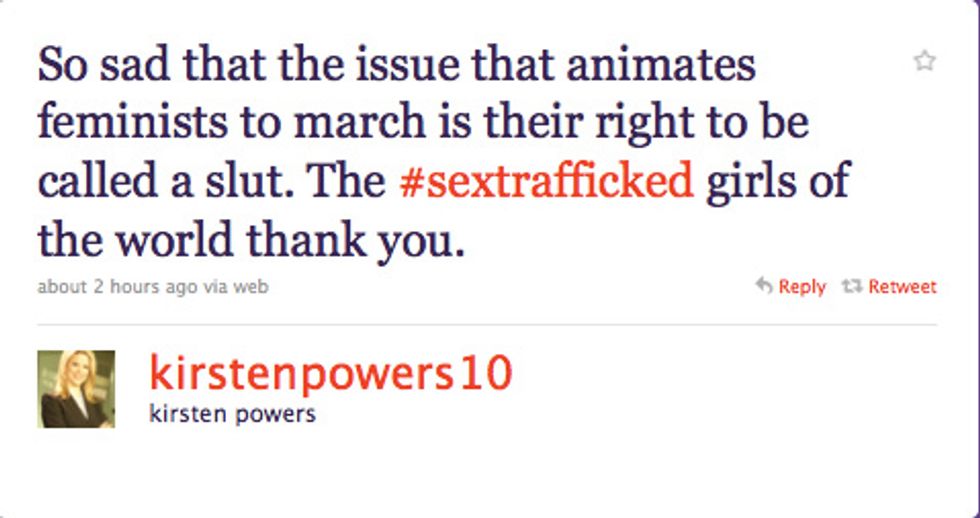 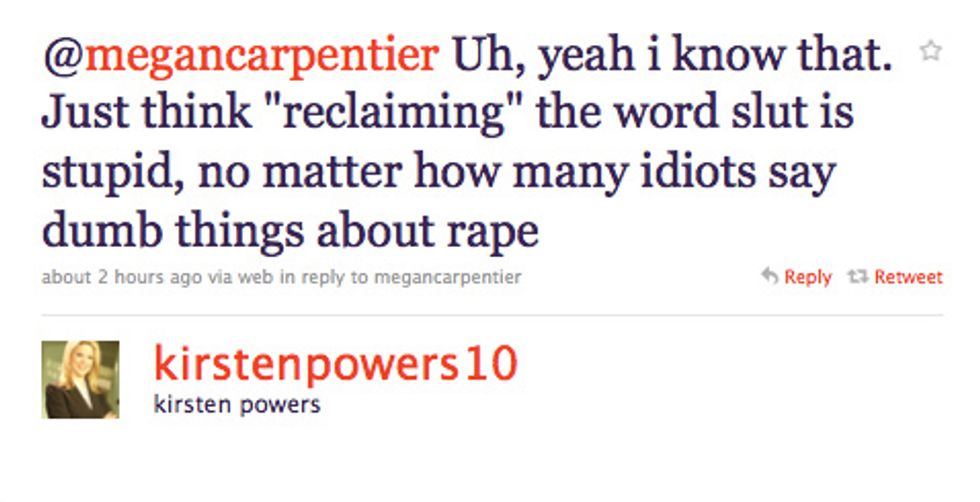 So this writer responded, again: "So, a little 101 here: 'slut' is a way to denigrate women, regardless of the facts of their sexuality or history or dress," adding "When the dude broke into my apartment to rape me, he didn't care what I was wearing. But the cops did. Both are problematic."

She responded, as she did to many others, with a link to this article, in which Australian protest organizer Lauren Clair told a reporter "I'm not going to be ashamed," for how she looks or because she had sex, which the reporter characterized as an effort to "reclaim" the word "slut." Notably, the protests started in Canada and spread to the U.S. before going to Australia -- and, reportedly, aren't coordinated by one specific source.

After some more testy back and forth, Powers Tweeted this to her followers: 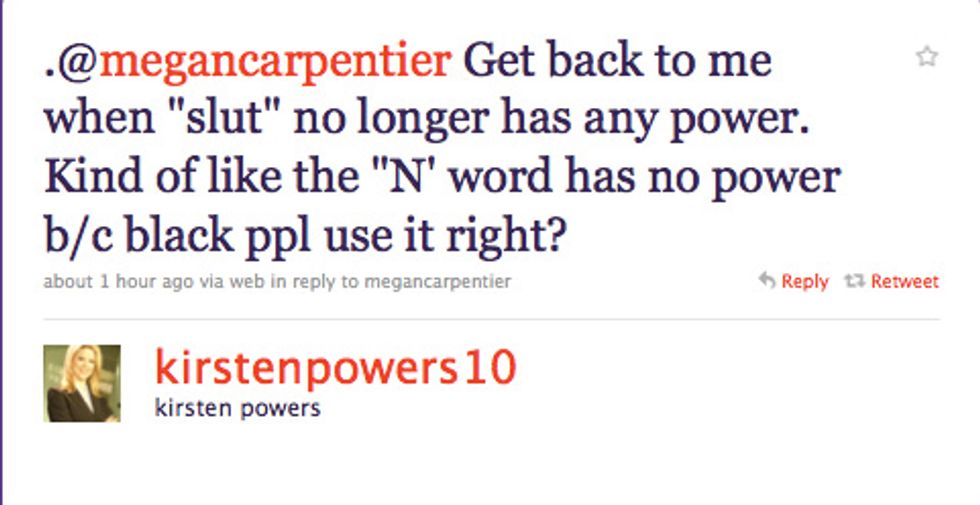 She then suggested that this writer should attempt to be less "juvenile" and "sarcastic" in her responses, without acknowledging that the debate started with her attempts to suggest what language anti-rape protesters should choose to employ in their efforts (or the fact that choosing the term "Slutwalk" brought it more attention than sexual assault awareness protests have had in more than a decade).

Then she Tweeted this after having been informed that this writer was a survivor of sexual assault: 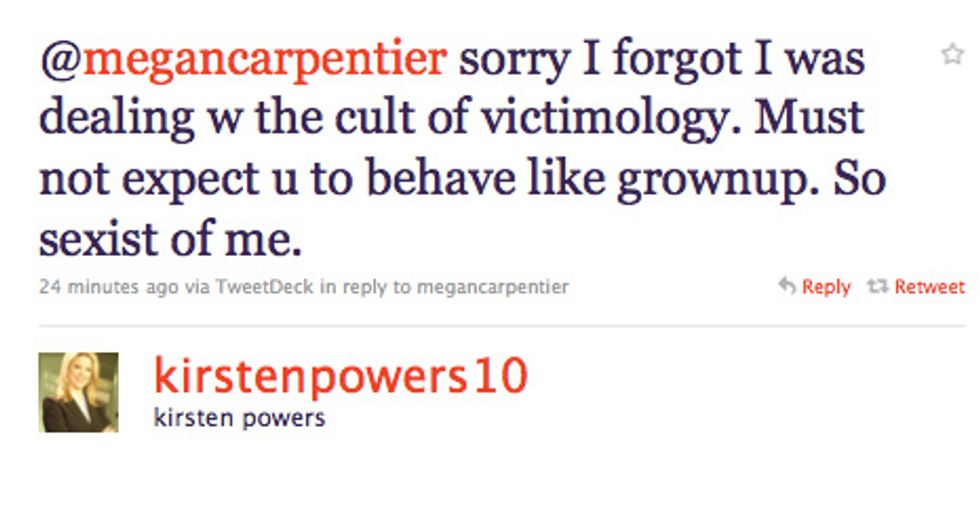 Though first she denied addressing this writer directly when confronted about her statement, she eventually Tweeted "the 'cult' refers to modern feminist movement not rape victims. But i think you knew that." and finally added:

[Disclosure: The author was the victim of a sexual assault in 2008.]