Charlie Sheen Is Loved Because, Not Despite, The Violence 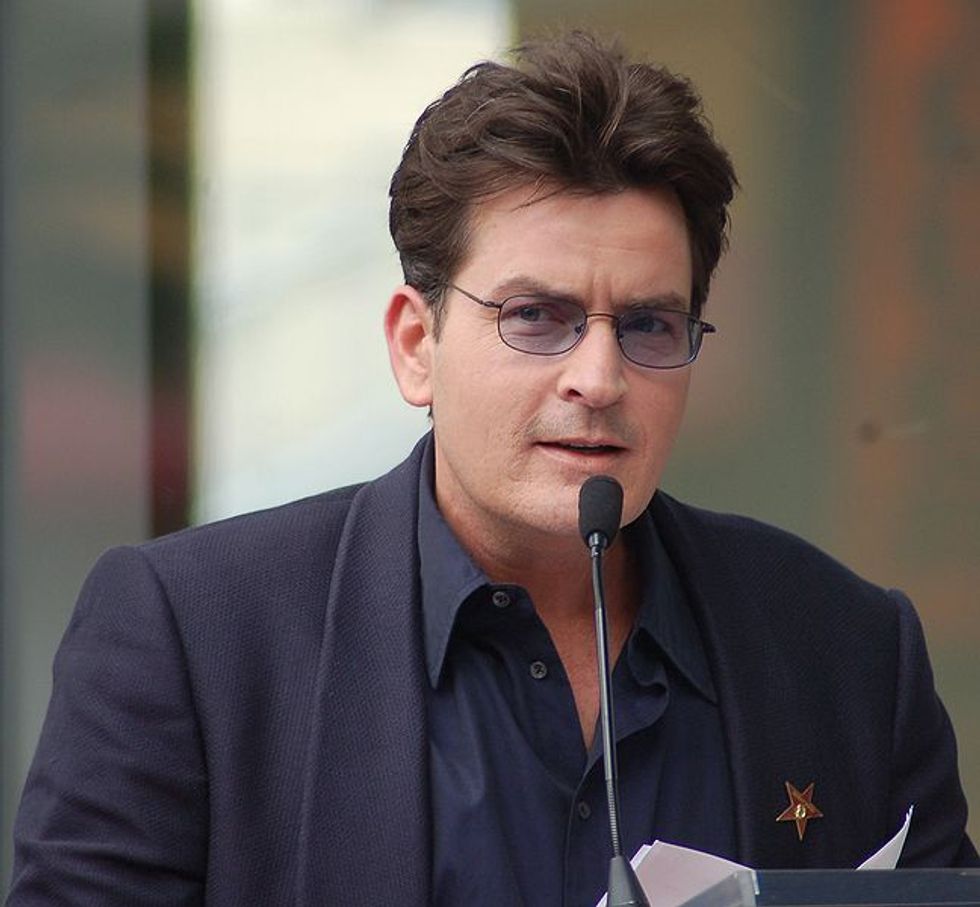 Alyssa Rosenberg links an article from The Daily Beast asking why it is that Charlie Sheen---asshole and most importantly, convicted wife-beater---is perceived by corporate America as a bankable star. And not despite his affection for hurting women (including a shooting incident where he hit Kelly Preston with a gun, and then later tried to blame her for it, a classic abuser move). No, what this article makes clear is that Sheen is appealing because he hits women. His new show Anger Management is named after his sentence for his latest conviction, where he pled guilty in exchange for being sentenced to anger management classes.* For those who hero worship him, part of what makes him a "bad boy" icon is his willingness to put a bitch down with the fist if he feels like it.

As with the angry defenses from Daniel Tosh fans, there is a tendency to tip-toe around the fact that for a not-insubstantial percentage of young men, violence against women isn't just not repulsive, but appealing. Part of it is the ridiculous narrative about the PC police, and cheering on rape and wife-beating allows young men an easy way to feel rebellious while not actually, you know, rebelling. (True rebels stand up against these things, because that's actually hard work and the people who push back on you have real power to hurt.) But obviously, it's the misogyny itself that's appealing. From the cradle, society teaches boys that they're better, smarter, and more powerful than the opposite sex. Then they grow up and find out that all their supposedly obvious superiority, some women reject them sexually. Some women refuse to submit. And even amongst those women who embrace submission, they clearly are doing so to get along, and not---as was promised---because they looooooove it. Sometimes even good girls who concede authority to men most of the time get irritable about sexist treatment and talk back. Even though these young men still objectively have a lot of privilege over women, they don't have as much as they feel they deserve,** and so they get angry. Thus, fantasies of raping and hitting women have a lot more traction than society is generally willing to admit. As does the implicit social permission to act on these fantasies that comes from the lionization of men who celebrate violence against women.

What's interesting about all this is that what makes Charlie Sheen appealing to his fans is they no doubt think of him as brave. That's the idea of the "bad boy", isn't it? The guy who has the guts to do what other guys want to, but can't? With the beating woman part of the whole thing, it's easy to see how that gets contextualized as "brave" for the fans. After all, there's a chance---sadly, way too low---that if you hit a woman, you could go to jail. One could easily see at least some fans swooning because Sheen gives the finger to laws against domestic violence and does what he wants anyway.

Of course, if you take a step back, what we see is that a wife-beater isn't actually a brave man at all. He's a man who shores up his own manliness by hitting people who are not only smaller and weaker than him, but are also easy to get the drop on because they foolishly believe that he loves them. He's basically someone afraid not only to pick on someone his own size, but he can't even pick on people smaller without manipulating them heavily to let down their guard. Take a step back, and what you see in Charlie Sheen isn't a sneering bad boy, but a pants-pissing coward. Everyone who looks up to him is, as well. They shun picking difficult and necessary fights---say, for women's full equality---for the easy and consequence-free feeling of temporary and empty power you get from picking on the picked-on. I suspect they know on a certain level what quivering cowards they actually are, which is why they're always trying to distract themselves with preening shows of pseudo-manliness.

As with many things, the insecurity of the douchebag crowd is, sadly, super profitable. Which is why not only FX but also Fiat are using Sheen despite his violent past. Stopping corporations from seeking profit is like pissing in the wind, but what we can do is stop tip-toeing around this issue. More open discussion about why a certain segment of young men romanticize violence against women could go a long way towards changing things, if only because those guys will be shown as the cowards they are, instead of the manly men they imagine themselves to be.

*Anger management courses haven't been shown to be effective, probably because abusers hit because they enjoy it, not because they struggle to control their anger. Sentencing abusers to anger management is therefore counter-productive, because it can give victims hope that they will be able to have what they want---the man they love without the abuse---when what they need is to understand that this will never be possible and it's time to move on.

**Read many of the abundant internet forums where men gripe about how unfair it is that women can say no to sex with them.