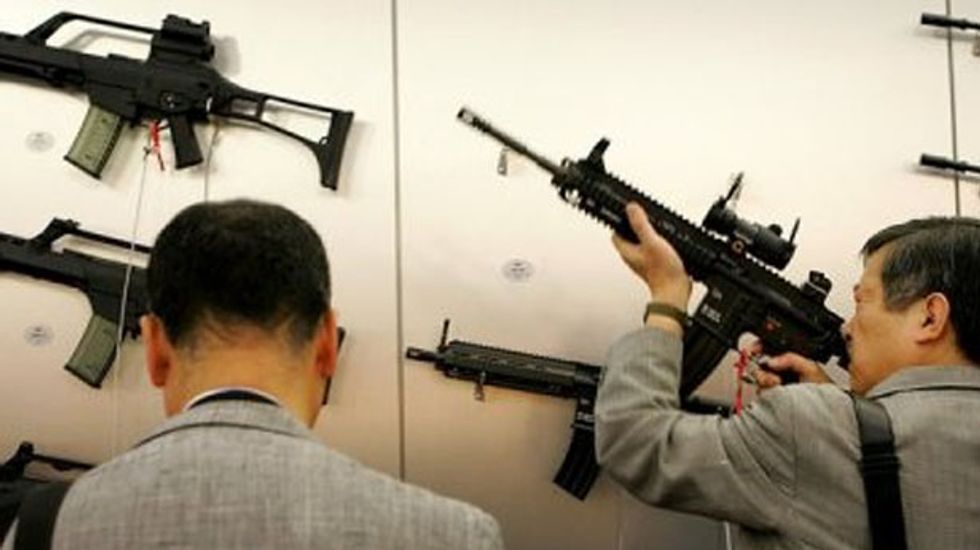 Within seconds of learning about the mass shooting in Aurora, CO, conservatives sprung into action to make sure that everyone knew that the problem isn't mass murders shooting up crowded places so much as people who would prevent such crimes by passing sensible gun control legislation. At this point, they've dispensed with even spending a few moments, much less a few hours, joining the rest of us in seeing the murderer as the bad guy. The only bad guys they can really get into a frenzy about are the people who suggest limiting  the Jesus-Prince-of-Peace-given right to be able to kill dozens of people in a few minutes.

Which is why we shouldn't be surprised that someone took it upon himself to terrorize the Real Bad Guys this weekend by walking into a movie theater with a gun that he stubbornly insisted was for his own protection. James Mapes, 48, must have been big on martyring himself to show those stupid liberals, because he went into not just any movie theater, but one that serves alcohol and food, which means he's violating not just company policy but the law with his little display of sublimated exhibitionism. Which means we get to see his mug shot and see that he has a T-shirt that says something about liberalism on it. I'm guessing whatever it is isn't awesome.

The whole situation just drives home how much gun nuttery is about sticking it to those stupid liberals who want to end mass murder, and not about "protection". I'm sure that Mapes is one of those guy who ran around in the days after the shooting, bragging about how he would have totally ended it by shooting Holmes. I'm sure in Mapes' mind, he's fully capable of a maneuver from a John Woo movie where he leaps off the back of a theater seat, flying sideways and shooting with two guns, evading all the people running around in the dark, tear gas-filled room to get a clean head shot to the guy wearing body armor, and then perhaps he'd land on the ground with a roll from which he'd leap to his two feet and graciously accept the incoming offers of female companionship from grateful survivors. But, looking at his picture, I have to admit I'm mildly skeptical that he'd be capable of such gymnastics. That's because no one can; the point of having those sequences in action movies is because action movies are supposed to be fantasies of imaginary people doing impossible things. Since he looks like an ordinary, if assholish, middle-aged man who doesn't have wings or other super powers, I retain my skepticism.

Not that any of that matters, because as I said before, it's not really about mass murder . Gun nuts don't have the time or energy to worry about piddling problems like the deaths of a dozen people who just wanted to watch Batman beat up some imaginary bad guys. Not when there's liberals out there who need to be silenced, lest they start convincing people that perhaps preventing mass murder is a good idea.