Finally, those on the West Coast who’ve memorized the genealogy of pranksterism and how it spills out continuously into the mainstream can rest their flapping gums: A book concerning The Cacophony Society’s proto-history is coming out.

Fans of Last Gasp already know the underground publishing house's books are always richly twisted, and this one in particular will be the gorgeous graphic novel which you hand people when they come over to your house and ask you, "So how did Burning Man / #Occupy / culture jamming / Fight Club / flash mobs all start, anyway?"

Among other things, John Law wrangles neon for a living. He built a huge sign for the Cyclecide “swearhouse” out of millions of other neon signs he collected that reads “FUN” in letters 15 feet high. He 'hanged himself' as Santa from a San Francisco lightpole during SantaCon / Santarchy’s heyday (before it became a worldwide pub crawl), and hunted a remote-controlled car through the desert for sport. As part of Survival Research Laboratories, he fabricated kinetic exploding sculptures for a crew who makes huge robots that fight each other. He once careened down a guy-wire into a flaming wall of live neon, and he has climbed the Golden Gate Bridge over 100 times (do NOT try this at home[-land security], folks).

Law is an urban adventurer of the highest order -- a radical-experience organizer and a thought-revolutionary-in-the-night. He and his more shadowy Cacophony co-conspirators are the closest thing you’ll ever meet to Tyler Durden, and they most likely served as the character’s inspiration.

Want to be a member? Sure, go ahead. There. You’re a member. Start doing stuff.

As even a brief study of Law’s life proves, the co-founder of Burning Man is not “all about” Burning Man, but went his own way long ago. Indeed, he sued his partners after a philosophical split reached a tangible head. Law prides himself on being one of the Cacophony festival offshoot's creators-turned-opposers who continues to do his own thing, planting cultural grenades everywhere and watching them explode. 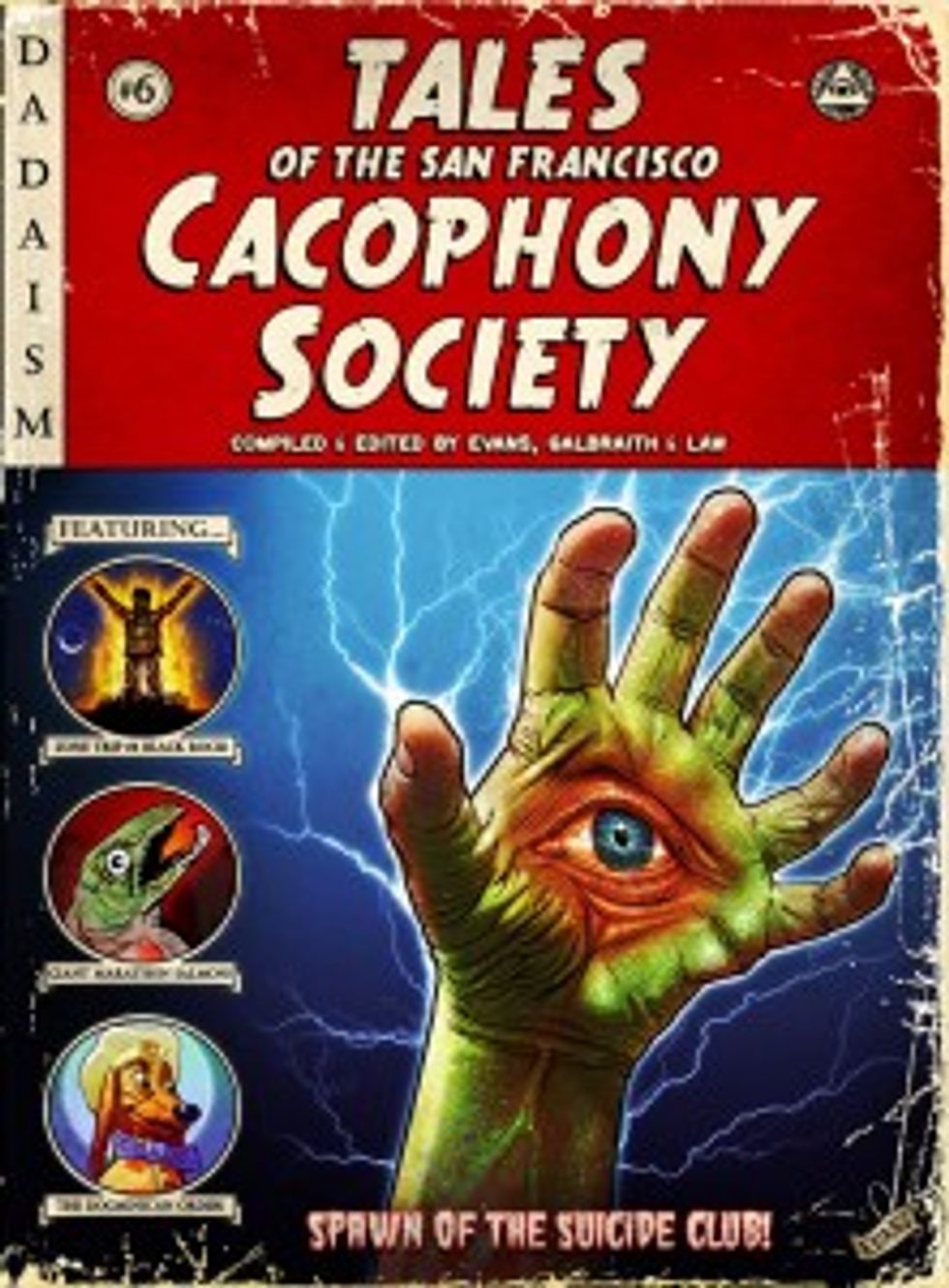 For tales of more Cacophony Society doings, you could also buy Re/Search’s PRANKS! 2 book, read Brian Doherty’s book This Is Burning Man, watch Oliver Bonin’s film Dust and Illusions, and go see John Alloway’s long-awaited official Cacophony Society documentary film, Into the Zone. See if you can find a copy of John Law’s book of short stories about bridges (he’s obsessed with them) called The Space Between.

In the coming days, Culture Clutch will sit in its rocking chair on the porch and sketch out an ancestral tree, outlining some of the more significant Cacophony Society actions and offshoots, and how they fancied up and improved the world we live in today. Existing as the root document for interactive phenomenae like flash mobs, “featherati” festival culture, Fight Club philosophy, and #Occupy, the small-but-wallop-packin’ West Coast subculture known as the Cacophony Society has, at this point in history, executed global operations designed against taking oneself too seriously. World War Three may one day be halted with clown noses and pastiched billboards, when warring factions decide they’d rather make art and maintain hilarity than watch TV and go shopping.