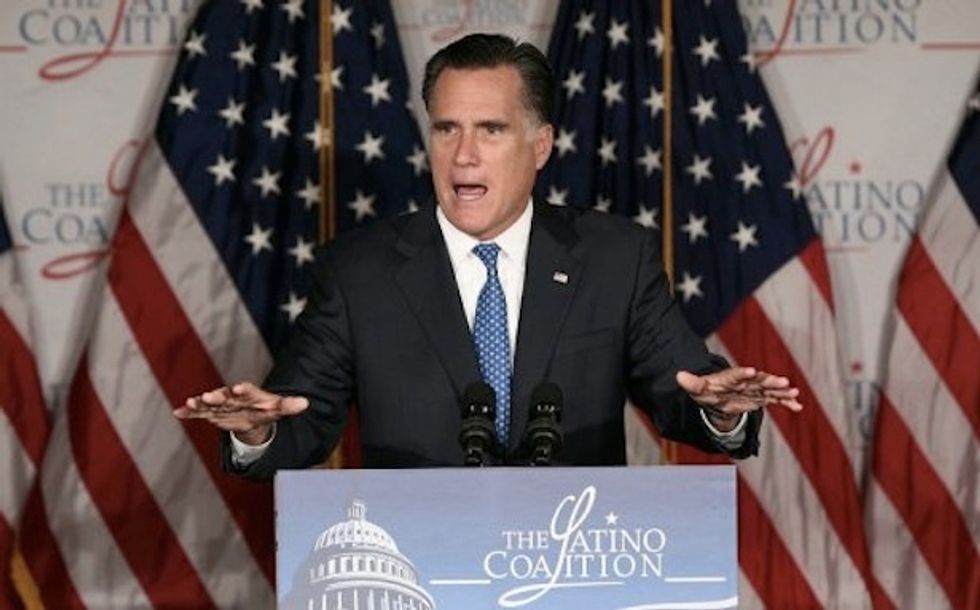 The Romney campaign, taking their cues from right wing media, has decided to run with the "Ha ha! Obamacare is a TAX!" narrative, counting on the mainstream media not to point out that it's a tax that almost no one will actually pay because it's only in place if you don't have health care coverage. Besides the questionable belief that calling something a "tax" is really going to hurt Obama politically more than calling something a "mandate", this strategy also has a major drawback to Romney: It opens him to the one kind of hard questioning the media does love, which is trying to catch the candidate in a contradiction. You see, the health care plan passed in Massachusetts under Romney is remarkably like the ACA in all the important ways, including a mandate to buy insurance that's enforced with a tax penalty. So is he or isn't he for a mandate?

His strategy for dealing with this problem? Make an illiterate semantics argument and hope the headache induced causes journalists to back the fuck off. In an interview with CBS, Romney says:

The chief justice, in his opinion, made it very clear that at the state level, states have the power to put in place mandates. They don’t need to require them to be called taxes in order for them to be constitutional. And as a result, Massachusetts’ mandate was a mandate, was a penalty, was described that way by the Legislature and by me, and so it stays as it was.

Debating whether or not a tax penalty is a tax or a mandate is a little like debating whether this is a cat or a kitty. I was already skeptical that the public at large wouldn't care much for the wording shift between "mandate" and "tax" to describe a process that wasn't changed in the slightest. I'm even more skeptical that they're going to find a meaningful distinction between a "tax" and a "tax penalty", especially if the Obama campaign makes it clear you don't have to pay either if you're insured. I suspect Republicans are overestimating how much of their own knee-jerk hostility towards the word "tax" has carried over to the rest of the public, which is where those swing voters they need to win over actually live.