The History of the NRA Is *Really* Interesting 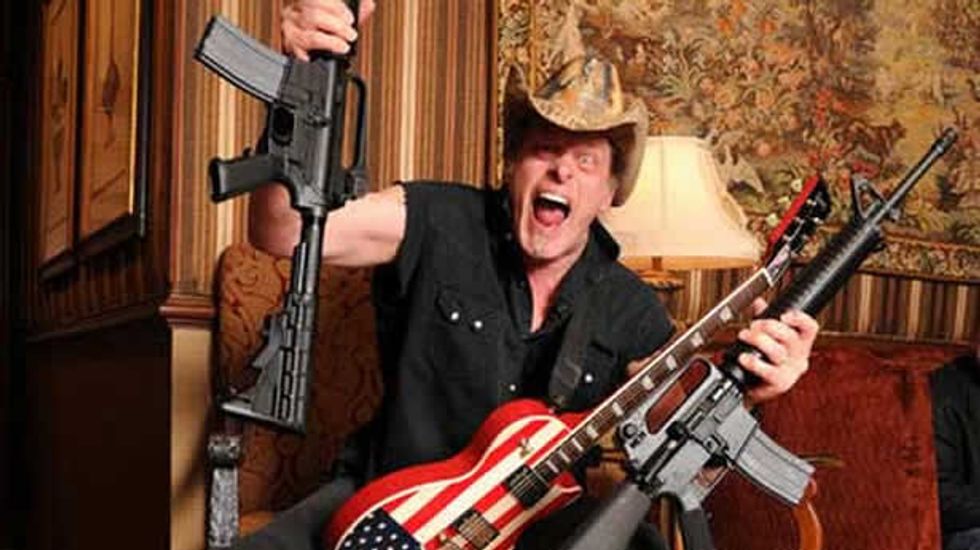 I'm getting screeched at by a bunch of wingnuts on Twitter, god only knows who sent them, who have it in their heads that I was just making shit up when I attributed modern day gun nuttery to the reactionary movement---that they all belong to, natch---that grew up in response to desegregation. I'm being told that this is bad history, mostly with strawman attacks claiming I said there were no guns prior to the 60s. Of course, I didn't say that. I simply pointed out that gun hysteria and the belief that gun control is a direct attack on the right of white Americans to protect themselves from nebulous "crime" emerged in response to the civil rights movement.

Really, the connection between gun nuttery and racism doesn't really need an elaborate proof from me, since I grew up around gun nuts and can tell you that in my long experience, the number of guns in your closet directly correlated with your fondness for the N-word. Like one handgun dudes? Not dropping the N-bomb much, if at all. Fifty guns in the closet guys? Dropping it all the time.

But hey, I love an educational opportunity, so here's some fun historical information:

The National Rifle Association was founded in 1871 by two men, a lawyer and a former reporter from the New York Times. For most of its history, the N.R.A. was chiefly a sporting and hunting association. To the extent that the N.R.A. had a political arm, it opposed some gun-control measures and supported many others, lobbying for new state laws in the nineteen-twenties and thirties, which introduced waiting periods for handgun buyers and required permits for anyone wishing to carry a concealed weapon. It also supported the 1934 National Firearms Act—the first major federal gun-control legislation—and the 1938 Federal Firearms Act, which together created a licensing system for dealers and prohibitively taxed the private ownership of automatic weapons (“machine guns”). The constitutionality of the 1934 act was upheld by the U.S. Supreme Court in 1939, in U.S. v. Miller, in which Franklin Delano Roosevelt’s solicitor general, Robert H. Jackson, argued that the Second Amendment is “restricted to the keeping and bearing of arms by the people collectively for their common defense and security.” Furthermore, Jackson said, the language of the amendment makes clear that the right “is not one which may be utilized for private purposes but only one which exists where the arms are borne in the militia or some other military organization provided for by law and intended for the protection of the state.” The Court agreed, unanimously. In 1957, when the N.R.A. moved into new headquarters, its motto, at the building’s entrance, read, “Firearms Safety Education, Marksmanship Training, Shooting for Recreation.” It didn’t say anything about freedom, or self-defense, or rights.

The modern gun debate began with a shooting. In 1963, Lee Harvey Oswald bought a bolt-action rifle—an Italian military-surplus weapon—for nineteen dollars and ninety-five cents by ordering it from an ad that he found in American Rifleman. Five days after Oswald assassinated President Kennedy, Thomas Dodd, a Democratic senator from Connecticut, introduced legislation restricting mail-order sales of shotguns and rifles. The N.R.A.’s executive vice-president, Franklin L. Orth, testified before Congress, “We do not think that any sane American, who calls himself an American, can object to placing into this bill the instrument which killed the president of the United States.”

Indeed, as Lepore reports, the NRA continued to support gun control measures that came out in 1968, in part because they were sold to the public by implying that black people were especially criminal. So what changed? Basically, movement conservatives took over. It's important to remember that movement conservatism really started as a revolt against secular humanism and desegregation. Laws against housing discrimination were particularly upsetting to a lot of white people, which is why they attacked MLK with rocks in Chicago. Opposition to housing desegregation was rationalized by fear of crime. It couldn't be more clear that conservative white America believed that the government wasn't protecting them from "the criminal element" anymore, and that they needed to arm themselves against the dark-skinned hoards they feared were coming for their stuff.

Right now, the main strategy around discrediting my observations about gun nuts is to claim that I've never been around it and I don't know what I'm talking about. This strategy usually works on liberals, because most of them really have never been around it and can only guess at what goes on behind closed doors. Alas, I grew up in rural West Texas, and so my relationship with gun nuts is a bit different than the average effete Brooklynite liberal. No, not every single gun lover I know is a paranoid racist; in fact, I know a couple of liberals who really love shooting, too. But they really are the exceptions to the rule. And guns nuts, I'd watch out for those liberals. They hear what you say when they're going incognito on the range, and they find it really amusing to report back to their liberal friends over beers later.