Voyage to see what's on the bottom

I am perplexed that as I scan the news, not more has been made of an amazing event that took place about three months ago. Amazing because of what happened-- something never done before in human history.

Amazing because of who did it-- a Hollywood film director, widely known, and in some quarters resented for, his blockbuster movies.

But what took place was real, and not a movie.

And amazing, perhaps most amazing of all, is how in this supposed Information Age, so few people seem to care that it happened, or even have heard about it.

Granted, it wasn't on Dancing With the Stars, so it's not that generally known to the American public. But still...

What happened was this:

James Cameron --yes, that James Cameron, got into a tiny, experimental submarine and descended to the very bottom of the deepest part of the ocean. No human being ever reached this part of the sea floor alive before. This type of expedition was last tried around 52 years ago, without anything like this measure of success.

Where submarine exploration is concerned, anything below 650 feet is considered "deep sea."

The record for the deepest recorded dive is 2,000 feet.

The greatest depth that light can penetrate is 3,280 feet. The Sperm Whale battles the Giant Squid no deeper than 3,770 feet. The Titanic rests on the ocean floor at about 12,000 feet.

In the Western Pacific, the Challenger Deep in the Mariana Trench goes down 11 kilometers, or 6.8 miles. 35,756 feet.

The deepest spot on Earth, it's distinguished by profound cold, complete absence of light-- and enormous, crushing pressure.

When you fly on an airplane, you know how when you fly above the clouds and you look far, far down, and then, if there's a gap in the cloud layer, you might catch sight of the ground, dimly seen far, far below that?

The Mariana Trench is deeper than you are high at that moment.

If Mount Everest, Earth's highest mountain, were at the bottom, there would still be a mile of water above its highest peak.

At the very bottom, the pressure exerted by the water column above is approximately 1099 times that at the surface, 6 tons on every square inch. Most bathyscapes or submarines, if they ventured there, would simply be crushed in an instant.

So James Cameron traveled to the bottom. His special, anomalous submersible was not crushed, and he survived. He shot video-- in 3-D! --of his searchlight passing over monumental cliff walls of rock.

Moreover, he did something else no one has ever managed to do before. With his specially designed and equipped ship he took a biological sample, and brought it back.

Now I know lots of people just don't like Cameron. They didn't like Avatar or his undersea movie The Abyss. They especially didn't like his exuberant use of the phrase, "King of the World!" when he accepted his Academy Award for Titanic.

Come on-- he was only quoting a line from his movie, which was being honored. What's the big deal?

At any rate, he followed his passion-- to do something dangerous and unprecedented.

I say he gets a pass. 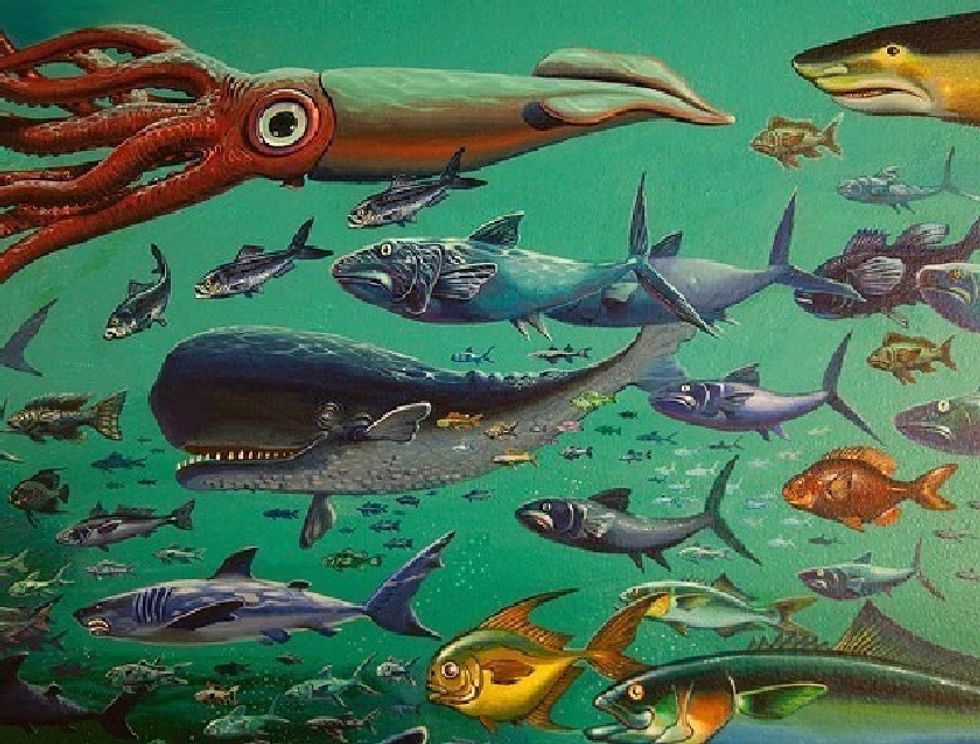 [Here's a link to a graphic on ocean exploration I received from a friend, Meika Jensen:]

illustrations above by Hal Robins