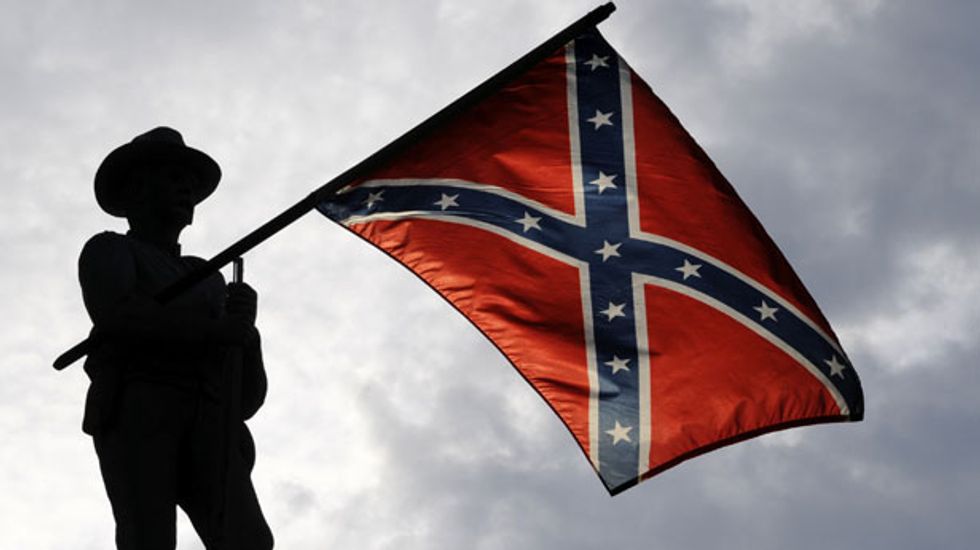 Jordan Michael Smith at Salon has an excellent article up making it clear that federal law enforcement has not, as you might fear after the white supremacist rampage, been ignoring the issue of domestic right wing terrorism. In fact, if you'll recall, conservatives threw a fit in 2009 with the DHS released a report detailing the threat of right wing terrorism in what seemed a naked attempt to get federal law enforcement to leave right wing extremists alone. I doubt that they did. While every suspected terrorist attack from Muslims, no matter how inept, is breathlessly covered for hours on cable news, the FBI has busted quite a number of would-be right wing terrorists through undercover work and other methods. But as Smith's article makes clear, they can do that in cases where there's a conspiracy. Lone nuts are harder to stop. That's why the anti-choice movement has relied so heavily on them in their terrorist actions; not only can everyone who helped the terrorist disavow knowledge of the crime, but since there's no conspiracy for the feds to track, it's that much harder to stop them. Whipping everyone into a frenzy of believing that violence is justifiable, keeping guns and other weapons easy to access, and providing "helpful" information about where abortion providers live has been enough for the anti-choice movement. I'm not surprised there's concerns about the same thing in white supremacist circles.

What I thought was really interesting in the piece was the explicit way that white supremacist groups have gone about trying to mainstream themselves:

Neo-Nazis were also pioneering a strategy they called “ghost skins,” which are attempts by right-wing extremists to keep quiet about their hateful views so as to blend into society and covertly advance their causes. “One white supremacist group has reportedly encouraged ghost skins to seek positions in law enforcement for the capability of alerting skinhead crews of pending investigative action against them,” says the report.

Another report released the same month revealed more about what it calls this “fascist path of stealth.” A ghost skin deliberately avoids shaving his head, wearing boots or braces, or anything that identifies his Nazi origins. “We strive to blend into society to be unrecognizable to the Jewish enemy,” one white-supremacist website is helpfully quoted as explaining. Prospective ghost skins are encouraged to join the military and receive training that can be passed on to other Nazis.

In 1981, during the first year of Mr. Reagan’s presidency, the late Lee Atwater gave an interview to a political science professor at Case Western Reserve University, explaining the evolution of the Southern strategy:

“You start out in 1954 by saying, ‘N*gger, n*gger, n*gger,’ ” said Atwater. “By 1968, you can’t say ‘nigger’ — that hurts you. Backfires. So you say stuff like forced busing, states’ rights, and all that stuff. You’re getting so abstract now [that] you’re talking about cutting taxes, and all these things you’re talking about are totally economic things, and a byproduct of them is [that] blacks get hurt worse than whites.”

This strategy is, I'd argue, the strategy of the modern conservative movement. Pretty much everything they push involves dishonest framing. They object to women's reproductive rights, but pretend it's about "life" or now "religious freedom". They line up at Chick-Fil-A to express anti-gay solidarity, but claim that it's about "freedom of speech", though no real actions against free speech have occurred. (A handful of mayors shamefully postured a bit, but that's gone away.) As Atwater helpfully explained, racist sentiment gets expressed in public in increasingly abstract ways. Even Paul Ryan has learned to speak better code, scrubbing Ayn Rand-isms from his speech and pretending he's not an acolyte. If you dare discuss conservatives' actual beliefs, instead of playing along with the dog whistles, they shit a brick. This is all basically the way modern American politics works. It's no wonder that white supremacists have seized on it, and as they do with most things right wing, exaggerated it. It works really well in the mainstream; many liberals and certainly all moderates are afraid to discuss the actual beliefs of conservatives for fear of the brick-shitting reaction. Why wouldn't they take such an effective strategy on for themselves? Of course they'll use the strategy, especially after seeing that the mainstream right will have their back by trying to silence discussion of the threat fringe right terrorism creates.