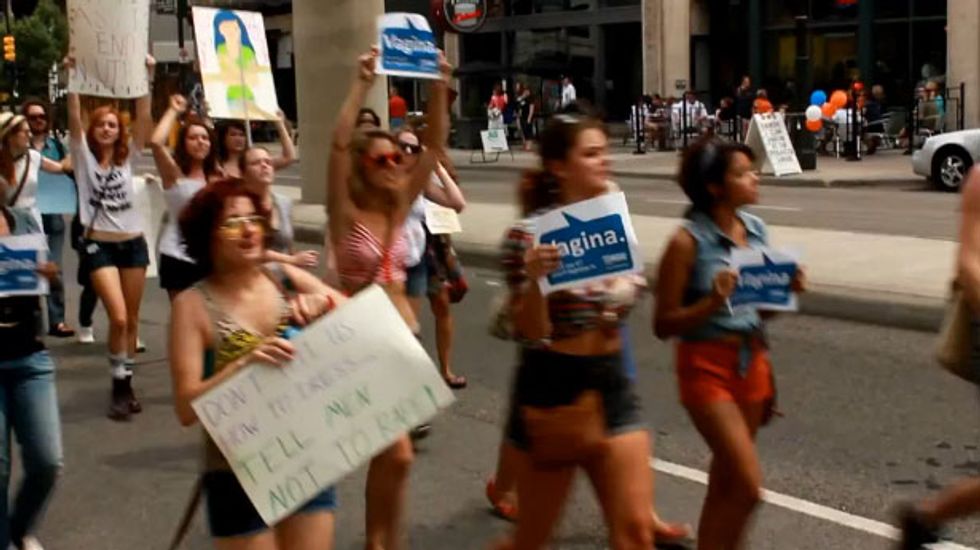 It's been a rough week for people who think women are people. Intellectually, we know it's important for the country to get a full eyeball of exactly how misogynist the Christian right is, to the point where their anti-sex blather evaporates the second they get a chance to minimize fucking rape. Emotionally, it's exhausting. Which is why we need a Panda Party.

Erin Gloria Ryan has a great piece for everyone suffering from rape fatigue to read. A sample:

Since around 2pm on Monday, I've felt like a contestant on a sadistic Japanese game show, donning an American flag bikini and a blindfold, covered in glue and standing in a phone booth, trying to catch dollar bills with my flailing arms as an industrial strength blower propels cash around me at high speeds. But instead of cash, I'm trying to process and react to a veritable blizzard of ignorant, rape-related bullshit flowing unabated from the mouths of conservative lawmakers in America. Reading story after story of how, say, a cranky old coot of a doctor peddling medically dangerous misinformation has somehow informed half of the American public's views on women's health care, or how, say, another dude — always a fucking dude — is saying that he doesn't think that pregnancy from statutory rape or incest is really A Thing since he personally doesn't know any pregnant kids or how, say, the GOP is condemning this sort of Wingnut Real Talk while quietly inserting a mandatory ultrasound hat tip/constitutional amendment that would force all rape victims to carry their assailant's child to term into their official party platform has worn me down.

I am at full rape capacity. I am officially in the throes of rape fatigue.

What I really like is how she gets that while the shit storms erupt when the perv side of anti-choice nuts comes out during a periodic bout of either denying that rape really is a problem or applauding rape like it's God's gift to reproductively recalcitrant women, their entire approach to women's rights is rooted in this sleazy misogyny. I often feel a need to shower after listening to anti-choice politicians talk about anything involving women. It all has the tone of men who are jerking off to their fantasies of the dirty girls and then wanting to punish the objects of their lust both for making them horny and for being unavailable. It's rough. For us, it's hard work trying to establish basic human rights. For the opposition, it's a kink. No wonder they have more energy.

But we have music! So come spin some tunes at Panda Party and give yourself a break from having to give a fuck. Self-care is part of social justice, after all.