The Underbelly of America Lines Up at Chick-Fil-A 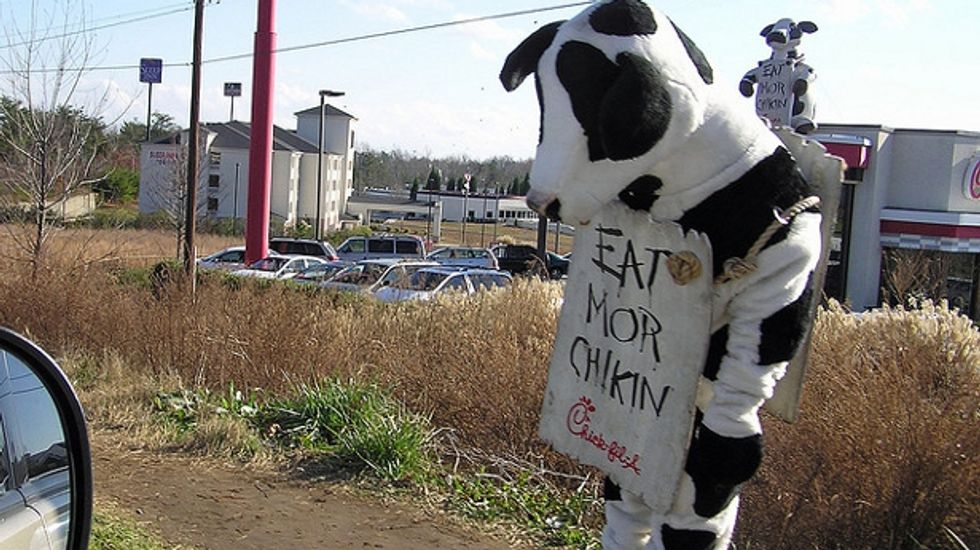 So apparently there were lines out the door of bigots at Chick-Fil-A yesterday for No Homo Day, or whatever they call it, so that bitter wingnuts can eat bland fast food in the general direction of the queers and their supporters. In a sense, this is progress. The bigots used to line up at spit on school children trying to enter newly integrated schools, but now they don't even have courage enough for that, so instead they passive-aggressively eat fried chicken at the liberals in hopes that pisses us off. Meanwhile, we're taking our fancy new Affordable Care Act benefits and throwing in some extra bouts of sexual intercourse in defiance of them. As the two camps divide further into Team Stuff Your Face With Crap and Team Fucking Is Fun, I have to imagine the gulf between high divorce rate red states and low divorce blue states will only increase.

Seriously, these are some sad, mean-looking people. I guess you'd have to be to care so much about stopping other people's happiness because they have the courage to come out of the closet and be honest about their sexual selves. Perhaps if they put down the fried chicken on white bread and ate a little fiber for once, they'd find that it's not actually a stick up their asses, but instead huge, impacted turds that has been begging for freedom for months, only to be denied by their creators, who has been skipping the broccoli in a deluded sense that anyone gives a fuck if they defy Michelle Obama.

But the typical Chick-Fil-A supporter is more than a fiber-shunning, anal retentive bigoted motherfucker that sucks the joy out of any room he enters. That impacted turd is also puts a strain on the body that makes basic logic functions in the brain fail. Jen McCreight discovered this when she aptly pointed out on Twitter that lining up to buy chicken to express your hatred of gay people makes you a straight up bigot. She got crushed by retorts from people whose stupidity would induce pity if it weren't for their burning hatred of others for completely irrational reasons. There were the usual delusions: The belief that freedom of speech is a right strictly reserved for conservatives and it also includes the right not to be criticized. The belief that saying "nuh-uh" loud enough when someone correctly identifies you as a bigot somehow means something. The belief that liberals support "tolerance", and that means we should "tolerate" bigoted beliefs by not criticizing them.

You'll notice that very rarely are they actually making an argument. They're strictly focused on trying to shame and deflect criticism because they can't actually argue their position. That's because, as turd-addled as their brains are, even they can see that their actual arguments are laughably weak. No wonder they just want to stop making them and are demanding the right to just hate without having to actually make a defense of it.

But of all the dumb, this might be my favorite:

Of course, the problem with that is that bigotry is, by definition, a belief. You believe, irrationally, that another group of people is inferior and undeserving of human rights because of some arbitrary quality, in this case, who they are sexually attracted to. Not that it's uncommon to see conservatives arguing up is down and black is white, but this was just an especially stellar example of the form.

Frankly, whoever thought of eating fried chicken as an expression of solidarity with hate is a genius. Keep their pores greasy, their energy levels low, and their asses compacted with rotting shit and yes, they'll be cranky and ready to whip into a frenzy of hate against those queers and liberals who think they're so cool because they still remember what sex feels like. As an organizing tool for hate, you could do way worse.