Was Obama Behind the Occupy Crackdown? Look Like No. 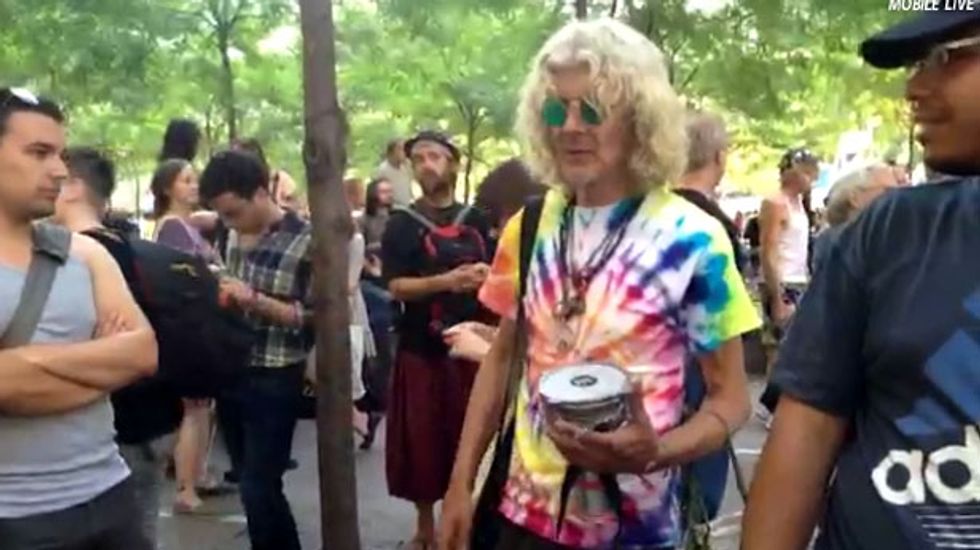 For the "Obama can do no right" crowd---not the predictable right wing one, but the sadly just as predictable left wing one---the crackdown last year on Occupy protests was like manna from conspiracy theory heaven. Since this particular crowd operates under the assumption that Obama is a dictator (which is why they endlessly hold him accountable for the removal of a public option from the ACA, even though it's Congress that did that), it was not much of a leap for them to take a series of brutal localized crackdowns on Occupy and blame the White House.  Judicial Watch, a right wing organization, issued a FOIA request to the DHS to find out if the Obama White House did direct these shut-downs, which Judicial Watch appears to favor. The request centered around Portland's protests, which are particularly interesting to the right, because there were heavy accusations of criminal misbehavior.

Caitlin: yes, that is our position; it’s been vetted with our Administrator and Michael Robertson, our chief of staff, and we have communicated with the WH [White House], which has afforded us the discretion to fashion our approach to Occupy issues…The arrests last week were carried out despite our request that the protesters be allowed to remain and to camp overnight…

Judicial Watch claims this demonstrates collusion between the Occupiers and the White House, when of course it does no such thing. What it does demonstrate, however, is that the White House was not only not coordinating some kind of crackdown, but seemed not particularly keen on shutting down protests at all.

A large part of the emails had to do with a premature release of a document the Department of Homeland Security was working which ended up at Rolling Stone. As the final draft of the report was not ready, there was a concern over the leak, which went on for many emails. However, the DHS members ultimately decided it was not a major issue, beyond the concern of the leak itself. Studying the emails reveals that the original request for the report came from members of Congress in light of the attempted bombing some blamed on the Occupy movement in Cleveland.

Popping in for a moment to say that you should read the report, which tries, and I believe succeeds, in the mission of being even-handed. The report does mention that the protests are disruptive to financial sectors, but since that's the point of them, I hardly think that's a risible statement. But they also go out of their way to detail the ways that Occupy worked very hard to minimize the potential for violence:

protesters and manage communications, logistics, and security. The OWS encampment in Zucotti Park

features a medical station, distribution point for food and water, and a media center complete with

generators and wireless Internet. Organizers hold general assembly meetings twice a day and a have

Committee, which plans protest activities and works to maintain peaceful and controlled demonstrations.

This high level of organization has allowed OWS to sustain its operations, disseminate its message, and

They then go on to say that while the original organizers (paraphrase) seem trustworthy and committed to peace, the growing movement is attracting less awesome folks, like Anonymous. This claim isn't an issue; as time went on, a lot of Occupy's resources were being directed to the question of what to do with the growing numbers of people in their ranks who weren't willing to play nice.

Anyway, back to Nathaniel's analysis:

Another portion was in dealing with the release of police officers’ personal information, and concerns of vigilantism threats against their families. This concern was given multiple times in emails to police departments when asking for restraint in handling of the Occupy protesters. The administration rightly recognized that Anonymous responded to violence, and were not acting as anarchists as some in the media had presented them. The responses from some police departments, sadly, demonstrate how this warning fell on deaf ears, and the response from Anonymous was as predicted, with over 13,000 police officer names and addresses released.

Corey Robin also weighs in, pointing out that part of the problem is that a lot of people on the left have inadvertently absorbed right wing narratives that posit that federal power is somehow always more oppressive than localized power:

But let’s be clear: saying that the crackdown of Occupy was not coordinated or organized by Obama hardly means it wasn’t repressive. As the dwindling fortunes of the Occupy movement suggest, it was—and almost lethally so.

But to understand how and why that repression was so effective, we have to revise our notion that somehow centralized power is automatically more coercive and repressive than decentralized power. As I wrote last November:

It’s not surprising that faced with the crackdown of OWS protests, Wolf would immediately turn to a theory of national, centralized repression. It’s part of our national DNA, on the left and the right, to assume that tyranny works that way. We’ve inherited a theory that holds, in the words of the Yale constitutional law scholar Akhil Reed Amar, that “liberty and localism work together.” Nothing…could be further from the truth.

You'd think that people who know their history around, say, the civil rights movement would understand that federal power is often a check on the ability of authoritarians to gain control on a state or local level, and then rain terror on people's heads. But as Corey notes, this narrative that federal power is automatically more suspect is hard to dislodge, no matter how often we grasp that "states rights!" has its roots in the belief that states should have the power to legalize slavery, enforce segregation, or otherwise deprive people of basic human rights. So when local cops started banging heads, it's not surprising that eyes drifted towards the White House, because it's a nice, simple explanation that dispenses with the need for nuance. But it's the wrong narrative.

Frankly, I always thought Occupy was a good thing for Obama's re-election chances. Recent events have shored up that assessment. Occupy put the concept of class warfare and the 1%-vs-the-99% on the map, and Obama neatly lifted that narrative and placed it like an albatross around Mitt "Thurston Howell III" Romney's neck. Yes, Obama owes favors to Wall St. But he also has a strong need to cater to this populist narrative. As painful as it is, these things defy any simply explanation or narrative.