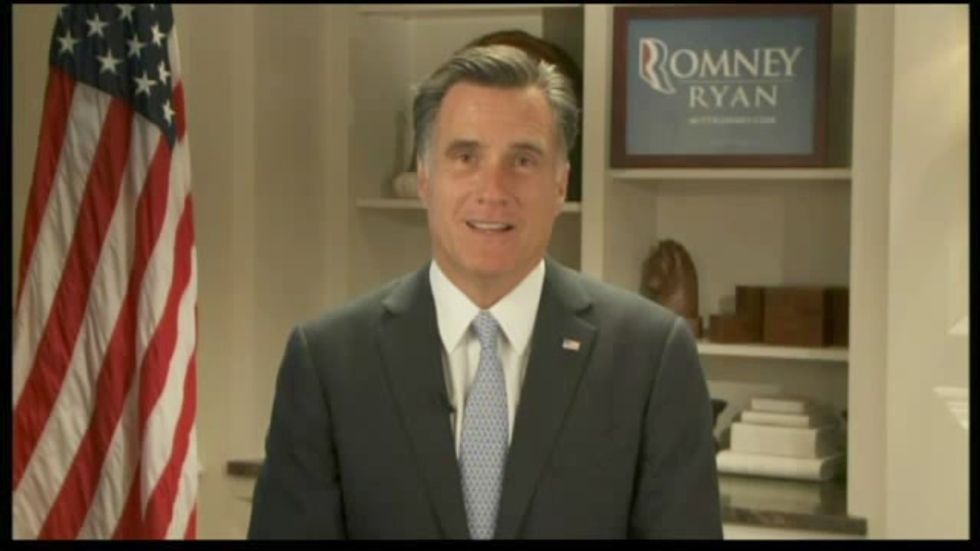 As Scott Lemieux notes, this ludicrous narrative has emerged that Romney was merely pandering to his rich benefactors in the 47% video and wasn't expressing his sincere beliefs. It's a more clever dodge than the MISSING TWO MINUTES!!!111!!11!1eleventy!!!!111! one. For one thing, the MISSING TWO MINUTES!!!111!!11!1eleventy!!!!111! claim has been debunked and the missing footage is available for viewing, and was only missing because there was an uploading error that has been corrected. But the "what's in his mouth isn't what's in his heart" thing is more disturbing because it allows people to believe that Romney isn't what he seems. It's also somewhat plausible, because Romney is such an empty set of a candidate. Most politicians are adept at telling people what they want to hear, but by both Democratic and Republican estimation, Romney is a special case who appears to have no convictions at all.

Well, I think the reason these videos are so compelling is that this is the first time we've gotten a full earful of what Romney sounds like when he's being sincere. What's amazing about these videos is that he expresses conviction that we almost never hear from him. His anger at people who feel "entitled to food" was so much more sincere than, say, his nostalgia at remembering his father giving roses to his mother. It's so startling that Jonathan Chait, who was, by his own measure, eager to give Romney the benefit of the doubt, is now reeling at what a hateful bastard the man turned out to be.

Instead the video exposes an authentic Romney as a far more sinister character than I had imagined. Here is the sneering plutocrat, fully in thrall to a series of pernicious myths that are at the heart of the mania that has seized his party. He believes that market incomes in the United States are a perfect reflection of merit. Far from seeing his own privileged upbringing as the private-school educated son of an auto executive-turned-governor as an obvious refutation of that belief, Romney cites his own life, preposterously, as a confirmation of it. (“I have inherited nothing. Everything I earned I earned the old fashioned way.”)

First, in general, a candidate’s statements behind closed doors to people who already support him are more likely to reflect his true beliefs than public statements designed to appeal to those who don’t share his beliefs. Second, Romney does pander a lot, but the thing is that he’s absolutely terrible at it. His lies are obvious, which makes the moments when he says something he seems to genuinely take to heart strikingly different. His comments about the 47 percent were notable for their apparent genuineness.

It's always entertaining when a centrist white male Democrat gets exposed to the real asshole lurking underneath the genial exteriors of the handful of Republicans who have managed to get centrist white male Democrats to think they're not so bad. Alas, for the queers, the ladies, and the people of color, imagining that there's a Republican politician left standing who means well but is just a tad conservative is a luxury we cannot afford. "He isn't so bad" isn't something that makes sense when contemplating someone who would veto your right to marry, force you to have a baby against your will, and enact spending cuts that are only popular with Republicans because they disproportionately hurt people that look like you. From our vantage point, it's easy to see that if you're a white dude who means well but is a little conservative, you should just be a Democrat. Much to our dismay, there's plenty of room for you in the party.

Not that I think the lesson will stick or anything. We went through this process with John McCain, who was applauded as a reasonable conservative, and then exposed to be a seething mass of anger and resentment against ordinary Americans just trying to get by. And we'll probably go through it again in 2016. But I just want to be clear: Beyond learning this about Romney (or McCain or whoever), we need to realize this attitude of obsessive sneering at the lower classes is what being a Republican is about. And it's a problem that actually echoes through the classes. Wealthy Republicans sneer at everyone. Upper middle class Republicans (and sadly, some Democrats) sneer at the lower middle classes, and see them as crass and wonder why they don't just get a little better. Middle class Republicans generally obsess over why service sector employees aren't more docile and cheery. White working class Republicans obsess over what the poor are doing, especially if they're poor people of color. There aren't really poor Republicans, so I think I can finish up with that. If there's any doubt that this is their favorited form of discourse, I invite you to go to Facebook and look at what the Republicans you know are talking about.

I mean, his name is "Mitt". If you were writing a comedy that had a sneering upper crust frat boy as a character, you'd pick that as his name, and then reconsider on the grounds that it's too easy.