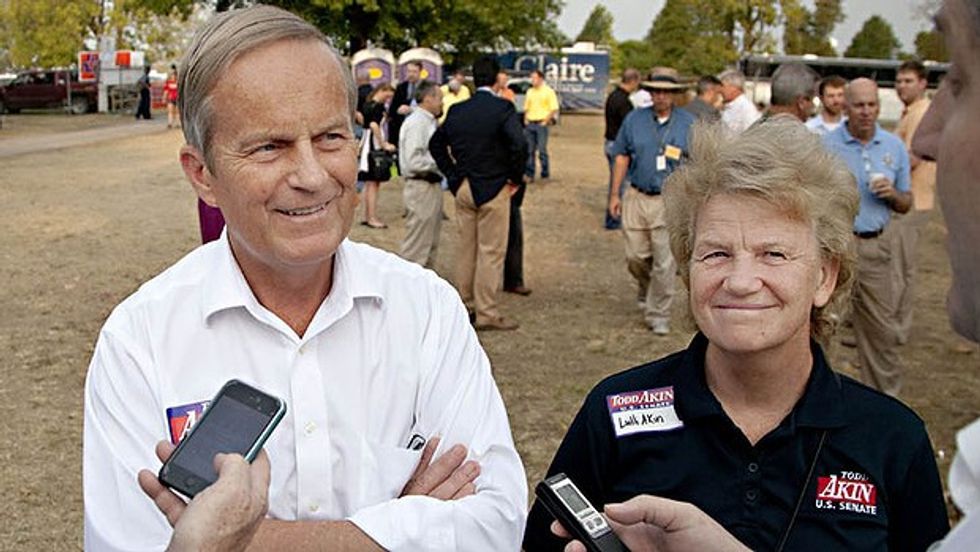 Via the comment threat at Feministe, I found this excellent blog post analyzing the "women for Todd Akin" organizers. As you can imagine, female supporters of Akin are by and large religion-addled fans of the patriarchy. Why women support the oppression of women is an interesting phenomenon, no doubt worthy of many books, but as becomes clear from this, the main reason is that they're often willing to accept second class citizen status in exchange for an opportunity to hurt other women. In fact, I'd say for a lot of them, they feel that second class citizenship is inevitable, in their lifetimes at least, so they're going to get the best of both worlds by accepting the gains feminism has won for them* and they get to punish and oppress other women.

Of course, the question is, "Why do they want to punish and oppress other women?", and reading this post replete with quotes from Akin supporters, the answer becomes clear: S-E-X. The perception that other women---liberal women, younger women---are out there having fun naked times while they have to wash the dishes for the immobile football-watching lump on the couch comes across loud and clear, even if it's often disguised as "concern" for these other women, who are told they are ruining their chances for having an immobile lump of their own to clean up after. All jokes aside, what's interesting is how much the anti-choice ideology, at least coming from female anti-choicers, is rooted in the rock solid belief that sex is inherently degrading to women. Because of this, they tend to link up legalized abortion with other claims that women are oppressed by male sexuality, and that this oppression is a new thing. I'm not sure how sincere these beliefs are, but the argument does carry with it the assumption that the purpose of patriarchy is to keep men from oppressing women with their lust. Some examples:

Asked how she reconciles these beliefs [Akin's belief that the government doesn't have a right to interfere in healthcare] with Akin’s belief that the government should have a say in what women choose to do with their bodies, she said: “There is a real war on women today because of pornography and abuse. I don’t think anyone is trying to tell women what they can and can’t do with their own bodies.”

This is the kind of comment that makes literally no sense to people who believe that women are autonomous creatures with minds of their own, because of course Akin's preferred forced childbirth policies are about telling women what they can and can't do with their bodies. But I speak fluent anti-choice-ese, so I can translate. Basically, anti-choicers are convinced that no woman would choose non-procreative sex on her own. They assume every woman who is making the choice to have sex without procreation is being manipulated. That's why they seem to think the human trafficking problem is worse than it actually is, because in a sense, they see all women who have sex outside of the in-marriage-for-procreation framework as being abused and, in a sense, trafficked. They see banning abortion as a way to protect women from men "abusing" us by having sex for fun with us instead of for procreation.

That there's no real world evidence to support these contentions isn't really the point. They realize that taking women's rights away is perceived (correctly) as misogynist, and that perception hurts them. So, they reframe their desire to deprive women of an autonomous sexuality as protection. Yes, that means they're trying to hurt women while claiming they're trying to save them. That's the sort of illogical knots that being anti-choice causes people to tie themselves into.

The notion that giving women a free choice to have non-procreative sex is actually oppressive to them crops up again and again:

Having had an abortion, I realize that Todd is advocating for women. And it breaks my heart that women think that choice is the answer, because it was such a temporary situation—my emotions and my thoughts and my feelings at the time—and it’s a permanent solution that I can’t take back. And Todd is advocating for women, so that in the future, women don’t have to do what I have to do, and that’s grieve every year.

Anti-choicers frequently fall back on claiming that if abortion is legal, that means it's required. Basically, the belief is that if women are free to have non-procreative sex, then they feel they have to do it in order to "compete" with other women for male attention. Therefore the proposed solution is requiring sex to be for procreation only, which they claim means that women will be able to cut men off from sex, raising the "value" of it and making it easier to extract wedding rings and feigned expressions of love before they begrudgingly give it up. The entire ideology only works if you assume that women, left to their own devices, don't have sexual desire.

There's also an inability to believe that women are capable of knowing what's best for them:

Judy Shaw, who was praying at the Fort Wayne abortion clinic on a recent Thursday morning, would agree with the statement that there is a “war on women,” but not as that phrase is commonly perceived.

“I believe that a woman’s gift from God is to be a mother and caretaker,” she said. “I think it’s just in us, the need to nurture.”

Shaw believes President Obama “has evil intentions against women” because he is pro-choice and pro-birth control. To Shaw,the president is pushing things on women that are harmful to their very being.

You can really begin to see how female misogynists justify their ideology to themselves. If you believe that women are inherently stupid---too stupid to have a free choice in anything, because they are by and large incapable of choosing "correctly"---then you can convince yourself that you're exceptional. All those other women are so stupid that they don't know what their purpose in life is, but you know. Most women are too stupid to deserve a free choice, but even with freedom, you chose correctly, making you so much better than the rest of them. It's a very seductive belief. Of course, sex is even more seductive for most women, which is why we choose "getting laid" over "feeling superior to other women by claiming they debase themselves with sex".

“As women we have a message, in this ‘war on women’ that has been declared,” said Heather Kesselring, of St. Louis, one of the speakers at the event. . . . The real war on women “is pornography, it is sex trafficking, it is abortion.”

Again, the belief is that sex itself degrades women, so anything that is related to it is put in the same basket. Sexual fantasy is treated as inseparable from actual rape. They simply blow past the idea of consent, because they believe women are incapable of giving meaningful consent. Women, in this framework, are viewed as permanently minors. The ideal is a situation where women always have guardians to make their choices for them, first fathers and then husbands.

Women's "dignity" isn't the same as men's dignity in this view. Men's dignity is the dignity of being treated like a full adult who is capable of making choices for one's self. But women's "dignity" is assumed to be having a guardian who condescends to you and certainly doesn't expect you to want dirty things like sex.

*Anti-feminist women almost never refuse to work, request being paid half of what men are, refuse education, or refuse to vote simply because these are gains won by the movement they hate.