Rape Is Not An Accident 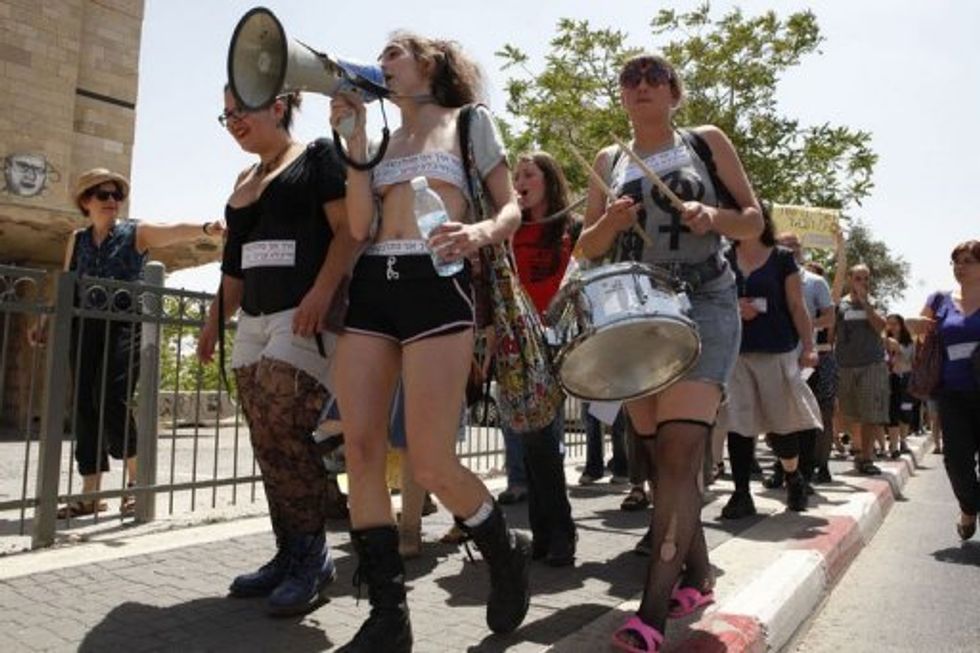 Dozens of Israeli activists take part in a "SlutWalk" rally in Jerusalem on Friday to protest sexual violence and counter claims that women's attire or behaviour provoke rape and sexual assault, an AFP correspondent said. Predominantly young women and some men marched through central streets of the Holy City in minimal or sexually suggestive clothing, chanting slogans and bearing signs. (AFP Photo/Gali Tibbon)[/caption]

A man and a woman drink a lot of alcohol and have drunken, consensual sex. In the morning, the woman---who, being female, is hysterical and quick to jump to conclusions---feels that she wasn't fully consenting, so she calls the cops. The man, who innocently believed it to be a consensual encounter, gets charged with rape and sent to the clink because of the SCARY FEMINIST laws that say that women with a blood alcohol limit over X cannot consent, so any sex with them is rape. The moral of this story is that innocent men are raping women left and right because they sincerely thought they had consent, but (because of hysterical, probably anti-sex feminists) drunk sex is now illegal. But only for men. Because of all-powerful, man-hating feminism.

This myth is super fucking popular, but it's not true. Unfortunately, I think that some of the feminist messaging around alcohol and rape is confusing, and so perpetuates this myth, but I'll get back to that in a second. You see this myth in many forms. For instance, any random thread on rape (see this one) will eventually devolve into a dude---sometimes stupidly, more often because he's a creep who wants to create doubt about women's rape narratives---complaining about this new culture of fear, where you can't fuck a lady without administering a breathalyzer these days without getting charged with rape. You see guys playing gotcha with feminists, saying, "But if they're both drunk, aren't they RAPING EACH OTHER?!" Sometimes it's passive-aggressive, with men expressing concern that they're sexual predators, and they totally don't want to be, y'all. Stephanie Zvan wrote about those guys:

These are guys who “support” anti-rape efforts in that they are happy to stand up and tell anyone who will listen that rape is bad.

They don’t exactly support the idea that we need to be making the same strong statements about rape and intoxication, though. They’re not quite fighting it either, but they’re…fidgeting. In comment sections, on Twitter and Facebook, they’re trying to figure out what they want to say without saying anything “bad”.

A few of them, here and there, are even talking. They’re saying they’re uncomfortable. One or two will even tell you they’re scared. “She could just say she was drunk, and then I’d be facing rape charges. Do you know how scary that is?”

Call it the Legend of the Accidental Rapist, if you will, but it's horseshit. This is not what rape under the influence looks like. I link the Yes Means Yes post "Meet the Predators" constantly, but it's time to do it again and keep doing it until people actually read it. Because it tells a very different, social science-and-actual-experience-backed story about rape and alcohol. Let me tell you that story:

There is a man who really likes raping women. It gets him off, the power and control he has, as well as the fear in her eyes as she realizes yes, this is really going to happen. He enjoys doing this as often as he can. But he doesn't want to go to jail for it, nor does he want people to ostracize him socially if they discover he's a rapist. (If nothing else, that makes it harder to find new victims!) So he attacks drunk women. He may even ply them with alcohol to get them drunker. He does this for two reasons: 1) They are easier to overpower and 2) No one believes them because they were drinking. After the rape, if the victim says she was raped, all you have to do is refer to the Legend of the Accidental Rapist, and everyone will rally to support you while dismissing the victim for being a sloppy drunk and a hysterical bitch who is too hopped up on feminist horseshit to think properly. Even better, most victims know that's how it will go down, so they probably won't say anything at all, leaving you to keep raping without much interference.

This is how rapists actually act. The guy who raped me tried this maneuver (which didn't work out, in part because I hadn't had much to drink.) The guy who raped Stephanie Zvan used this strategy. There are some victims who believe it was more confused than that, but the research suggests their rapists weren't confused at all. In those cases you read about where there are women who may be rounding up "bad sex" to "possible rape" because of alcohol, you'll find that they aren't calling the cops. Rape is a deliberate, malicious act disguised as an "accident", because that's the disguise that works to let the rapist off the hook. So if you're not plying women with alcohol in hopes they'll get so drunk that you can force them to have sex they don't want, don't worry about it. I mean, don't fuck someone that you worry is too drunk to consent, but then again, who does that anyway? Most non-sadistic (as in real sadism, not the consensual BDSM kind, so hold your horses people) people's first reaction when a partner seems not fully on board with a sex act is to be concerned, not to forge ahead. Just for decent human reasons, that should be your sexual strategy, not because you're trying to avoid a prison cell.

You'd think the attention being paid to the Steubenville case would clarify some of this, since what allegedly happened there---deliberate targeting of a drunk girl specifically because she was easy to rape and easy to discredit afterwards---is almost surely the most common form of rape, though this case was more outlandish, due to the multiple people involved.

Most of the reason that there's confusion about this is because creepy dudes with agendas sow confusion. Some of it is because a lot of people see rape as an opportunity to moralize about women's behavior, and instinctually think of rapists as vigilante justice squads setting women straight for being bad girls. But feminists need to step up and be more clear when we talk about alcohol and rape, too, and part of that is realizing for ourselves that there really aren't accidental rapists.

Greta Christina wrote yesterday about an anti-rape campaign that is being considered a success by law enforcement in Edmonton. It's the "Don't Be That Guy" campaign, and after the city was blanketed with it, the rape rate went down 10%. Greta cited it, correctly, as an example of how anti-rape messages aimed at telling men not to rape work, and much better than telling women to live their lives in fear of rapists. Here are some examples of it: 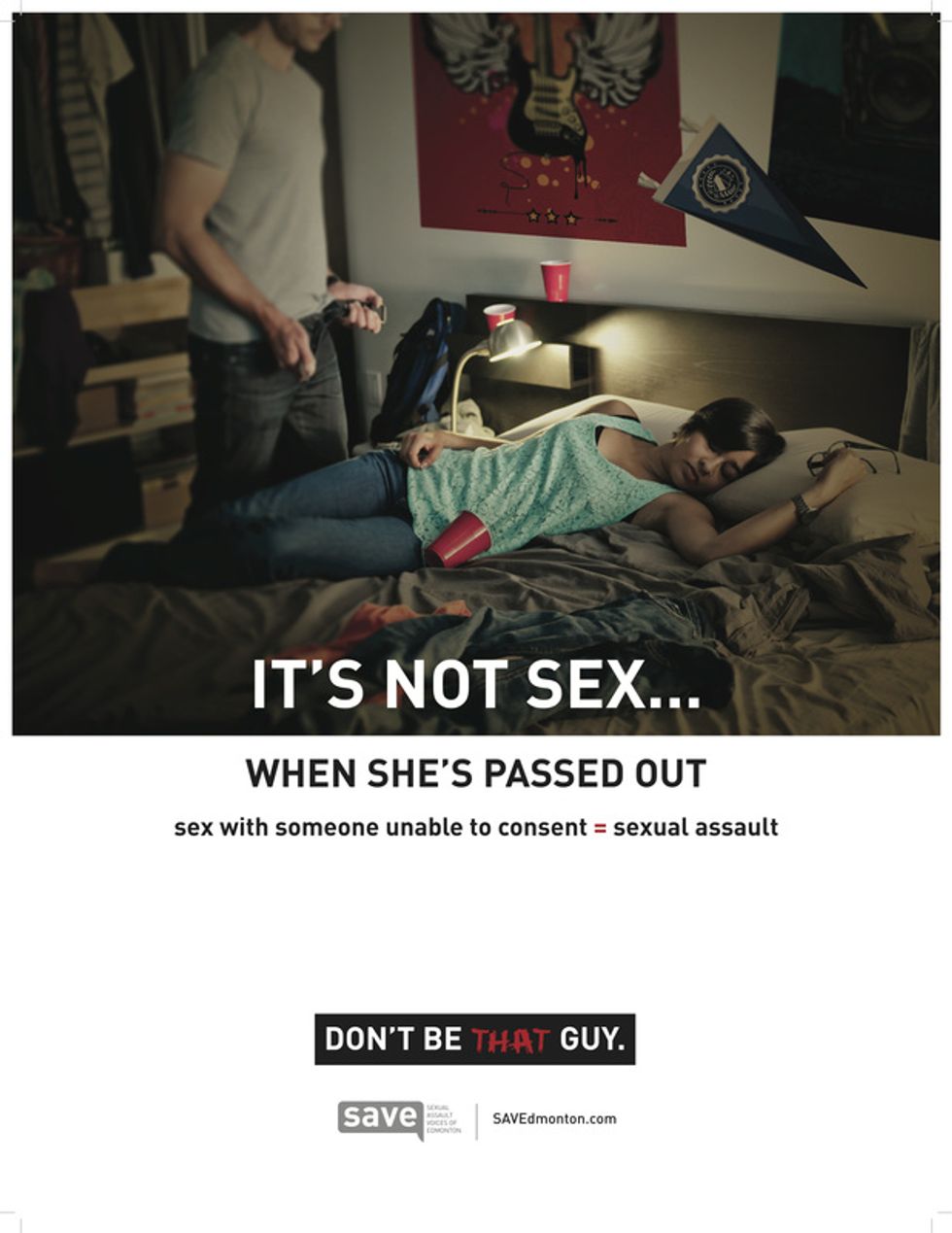 Greta didn't talk about why these campaigns aimed at would-be rapists work, just that they did work. The commenters immediately assumed it was because the campaigns clarified things for the mythical accidental rapists. As if guys look at these ads and think, "Oh crap, here I was thinking that as long as she's too drunk to resist, I can round that up to consent. My mistake! I will refrain. Thanks, public service campaign!" It's a silly idea, and one that, I think, leads people who want to focus on victim-blaming to feel secure that this is the only appropriate avenue of talking rape prevention.

But victim-blamers are wrong. Telling men not to rape works, and not because it prevents "good guys" who mean well from attacking drunk women, by clarifying the issues. It works for two major reasons:

1) This campaign puts rapists on notice. As noted above, rapists know how to rape and how to get away with it. If you're a rapist and you're looking at this campaign, what you're seeing is law enforcement letting you know that they're onto your game. This ad says to rapists: "When you claim that you didn't know better than to stick it to a woman who was passed out drunk, we know you're a lying motherfucker." The men in these ads are portrayed not as bumbling idiots who don't know better, but menacing predators, which is what they are. These ads let rapists know that their faux innocent game is not fooling the cops. Whether or not that's true is up for debate, but if you're a rapist who thinks you have everyone snookered, these ads will make you wonder if you're not as clever as you think you are. Remember, rapists like to rape, but they also like to not go to jail. These ads may look like education to the rest of us, but to rapists, they're a threat.

2) The campaign clarifies the issue for people who are snookered by rapists. Rapists have a social license to operate because other people are hesitant to describe their behavior as rape, or as wrong anyway. For a lot of people, hearing a male friend brag about nailing that dumb drunk bitch creates cognitive dissonance, and the temptation is to define it as not-rape. This is why the one guy in the infamous Steubenville video who disapproved of the whole enterprise kept saying over and over again that it was rape. He understood, correctly, that the willingness to use the word "rape" made all the difference in the world, that to name it "rape" is to admit that it is a crime. Obviously, in that case, the guy at the center of the video couldn't give a shit, but for most people, the weight of the word "rape" makes all the difference. If you can convince yourself that it wasn't that bad, or that it's not like she said no, or that she should be making better decisions, or whatever, you can convince yourself it wasn't rape. These ads define it as rape for you. Now when you hear about these behaviors, it will be harder to make excuses. Simply taking the social support away from rapists and making their friends less excusing of their behavior can do a lot to curb rape.

I hope this clarifies things. So go forward, feminists, and let us try to un-sow the confusion around the relationship of alcohol and rape. Remember, the accidental rapist is a myth, and whenever anyone claims to be one, I strongly advise putting on your skeptical hat and thinking very carefully about whether or not you're getting snowed.