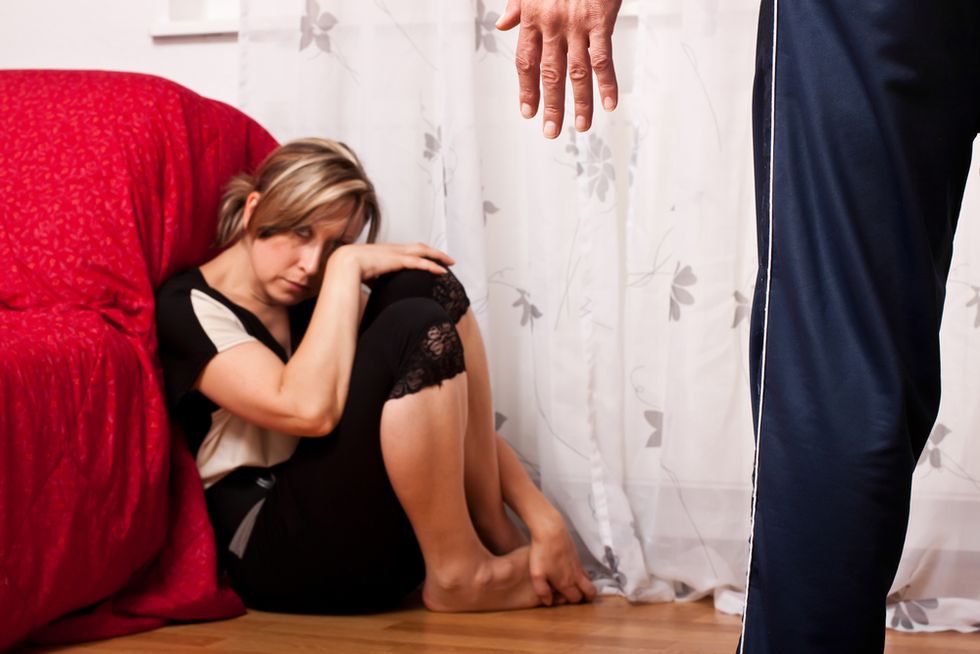 Updated to add: The House is set to finally pass the Violence Against Women Act today. Some Republicans are still stubbornly refusing to vote for it, including Tom McClintock, who specifically objects to it because he believes that the best response to domestic violence is "attempting to resolve and reconcile highly volatile relationships". As I argued at The American Prospect, this belief that the government should be in the business of blaming victims for their abuse and trying to "fix" the relationships is what's driving so much Republican hostilty to VAWA.

Yesterday, Time published a photo essay by Sara Naomi Lewkowicz that harrowingly depicts an incident of domestic violence. Lewkowicz didn't set out to do this. Really, how could she? She was following her subjects, Shane and Maggie, around in order to chronicle what it's like for a convicted felon like Shane to try to reintegrate into society. What she didn't know is that Shane, 31, was abusive to Maggie, who is 19 and the mother of two small children with her estranged husband, who had spent much of their marriage serving overseas. One night, while Lewkowicz was following them, Shane and Maggie got into a fight involving jealous accusations being thrown around, and then, Shane tried to beat and choke Maggie into submission. During this entire fight, Lewkowicz was snapping her camera, trying to document this in no small part as proof that it happened.*

The images of the fight itself are arresting and disturbing, but Lewkowicz does more than bear witness to domestic violence. She also chronicled the entire process of domestic violence and how an abuser sets up the opportunity to beat his partner. I thought it might be a useful exercise to go through these photos (with links, because I don't have the rights to the pictures) and explicate the steps an abuser goes through in order to manipulate the victim into accepting abuse.

1) Whirlwind romance. Shane and Maggie had only been dating a few months, but already they were living together and Shane was aggressively trying to become the father figure to the children, even though the older one was skeptical of him. Abusers commonly try to rush things, because it's important to them to lock the victim down. They know, if only subconsciously, that if they don't have it all locked down and they give into the temptation to hit their partner, the chance of the partner walking away goes up. This also helps establish the romantic narrative that their love is "different" from other people's---more passionate, more romantic---which makes the abuse easier to write off as overblown passion.

2) Create dependence. As becomes clear in this photo essay, despite Shane's economic woes, he provided a roof over Maggie and her children's heads and by leaving him, she lost her housing.

3) Isolate the victim from her support network. Again, this makes it harder for the victim to leave, because she has no one to turn to and nowhere to go. From the photo essay: "Within a few months of their relationship, Shane moved Maggie and her children to a trailer park in Somerset, Ohio. The location was farther away than Maggie had ever been from her family and friends before, and she said her feelings of isolation only increased over time."

4) Create emotional debt. As Captain Awkward explained recently, an abuser is "an expert score-keeper", except of course they only chronicle the emotional debts they believe are "owed" them and not the other way around. So, when they abuse you, they can say some variation of "you owe me" or "it's not like you're perfect". One month into the relationship, Shane got a major tattoo across his neck with Maggie's name on it. This is one of the more extreme versions I've seen of this, because that's something you can throw in someone's face basically until the end of time. "But I got a tattoo for you!" Translation: I altered my very body "for" you, and that is a massive debt that you can pretty much never pay, so you have to put up with my crap forever.

5) Guilt trips. Shane spent a lot of time making Maggie feel bad about paying attention to her children, whining that she loved them more than him. This is another way to create emotional debt.

7) Lean on the victim's loyalty to you in order to avoid consequences. Shane went as far as hugging the toddler that had just a few minutes before been trying to put herself between him and her mother. Message to victim: We're a family, and if you press charges, you're betraying the family.

8) After the abuse, act pathetic and beg for the victim's love and understanding. It's hard to see someone you love suffer, and abusers exploit this in order to pretend they're the victim here. Shane really played up his suffering, which made it very hard for Maggie.**

You will all be happy to hear that Maggie left Shane, even though doing so meant returning to a husband that she left and probably had a reason to leave. I suspect that having the photographer there to bear witness helped, since the photos make it much harder to minimize what happened here. I hope all this makes it easier to see how an incident of abuse often gets minimized, and the narrative in the couple shifts from "you hit me" to dwelling over the victim's behavior and the various debts she supposedly owes her abuser and how sad he is and how he needs her to help him blah blah blah.

*Some people, many of whom I've seen in other comment threads minimizing and apologizing for rape and domestic violence, tried to blame Lewkowicz for not intervening, even though doing so would have likely done little to help Maggie and may have spurred Shane to beat Maggie harder, and even though the cops were on their way. Make no mistake: These people are not happy about the existence of these images, because it makes it harder for them to accomplish their goal of confusing the issue of domestic violence so that it doesn't get prosecuted properly. They hope by making the discussion about what Lewkowicz did instead of what Shane did, they can limit the reach of these pictures. We should not indulge misogynists when they're misogynizing.

**This is why I don't get it when people argue for not prosecuting batterers on the grounds that the victims don't want them to. I bet they don't! Victims are aware of the growing ledger of "debt" the abuser holds against them, and "You got me thrown in jail!" will become a massive one. But if the abuser is cooling it in jail, that gives the victim at least some chance of clearing her head away from him and realizing that actually, she does not owe him a relationship and his "debt" ledger is bullshit.