Standing Up To Sexism Works

The battles over the very existence of women in geek culture have gotten so ugly that one could be forgiven for thinking that every geek dude who has done something sexist is primed and ready to fight to the death to defend every single act of objectification, insinuating that women are mentally inferior, and whining that men are the ones who are really victimized, because their god-given right to treat women as mindless sexbots is being taken away through the legally binding act of criticizing it. That's why I want to share this excellent tale of a woman who stood up to lady-alienating bullshit and, instead of being sexually harassed until she fled as a mental health move, actually had a real conversation about why it's not cool to make women feel unwelcome.

The woman in question is a data cruncher for a gaming company, and she objected to her CEO not only hanging this picture in their offices, but treating it practically as an object of worship, which he made his employees sign and hung in a central location. 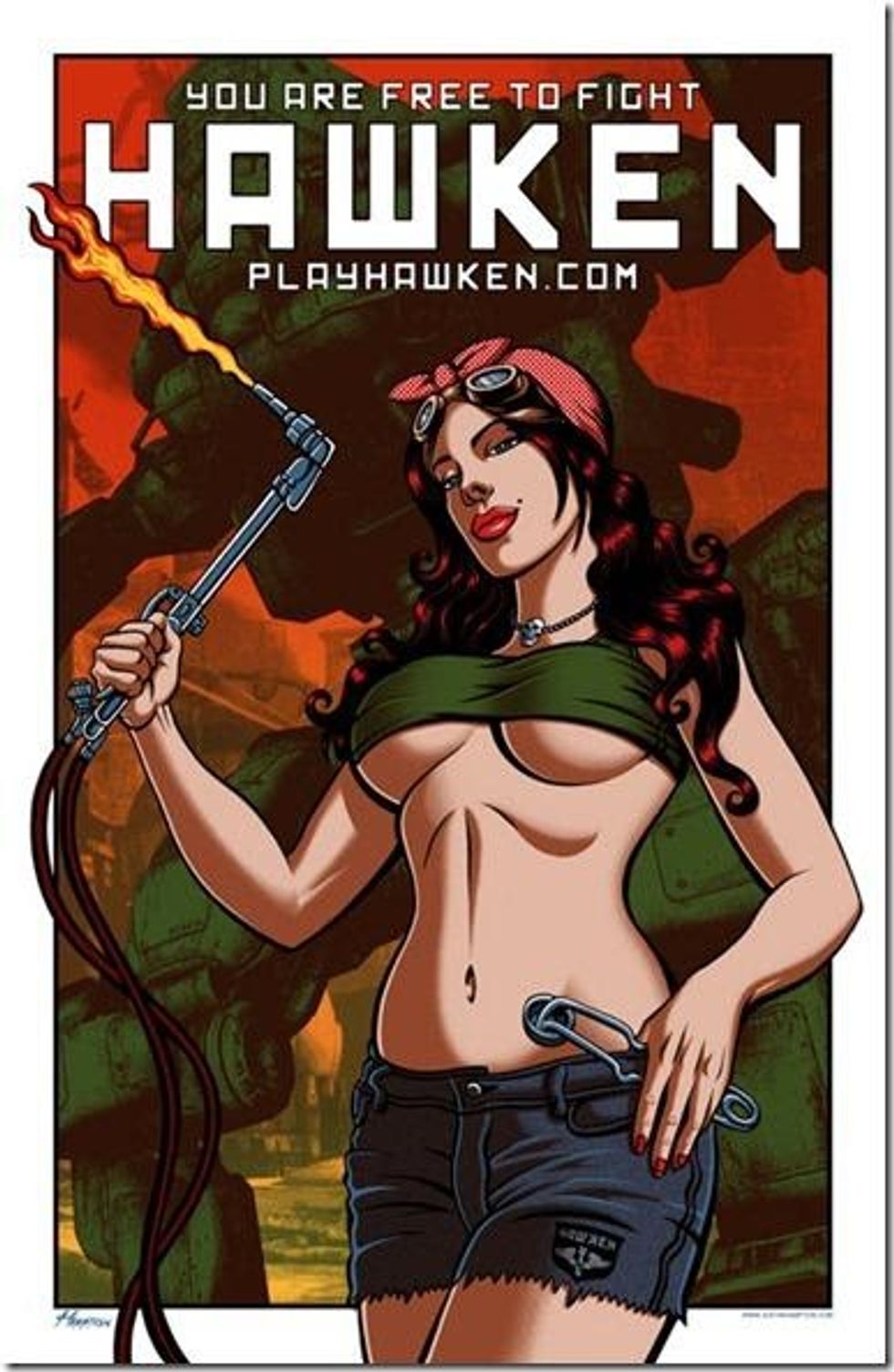 So she had her friend Sam Kirk draw up another image, which she switched out for the above one. 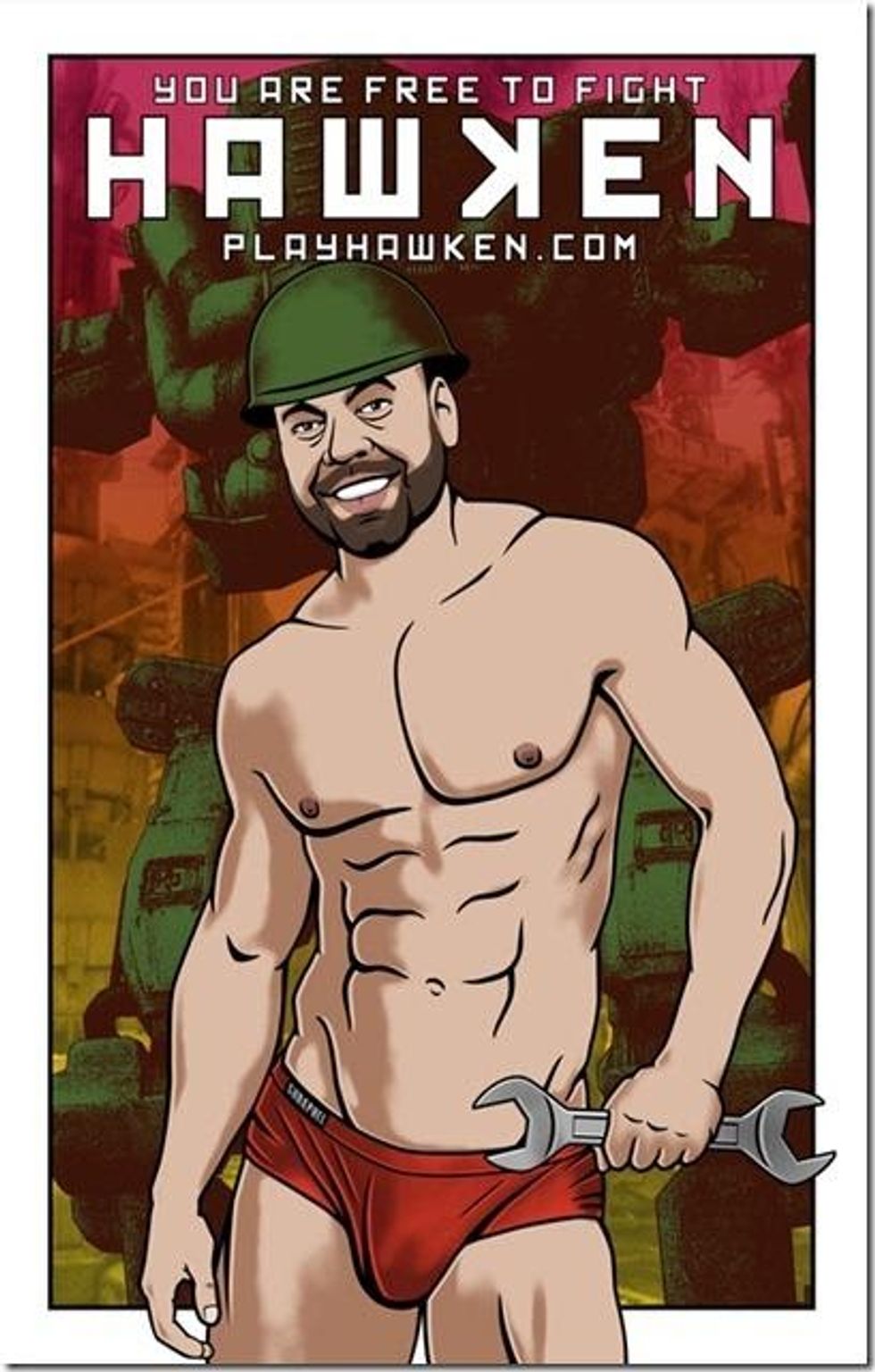 She buckled down and waited for the usual excuse-making, double standard-defending, and of course, whining about how it's "man-hating" to expect equal treatment in geek spaces. But luckily, none of that happened! Instead, most people were amused and the CEO even thanked her.

That was a brilliant prank. You called me on exactly the bullshit I need to be called on. I put up pictures of half-naked girls around the office all the time and I never think about it. I’m taking you and Sam to lunch. And after that, we’re going to hang both prints, side by side.

And that is what they did. Maybe not a perfect solution, but it certainly changes the impact of a half-naked lady poster to have a half-naked man poster next to it. Now the message is less, "This is a boy's club" and more, "We laugh at ourselves here".

I bring this up because I'm one of the speakers at Women in Secularism, which starts on Friday in D.C. (There's still time to register, if you want to come!)  The very existence of this conference is threatening to a lot of people who either believe that women should remain a small minority in secular activism, that they should embrace the role of disempowered harassment objects, or that feminist ideas---i.e. the belief that women are equal human beings---have no place in secular spaces, despite the long history of secularism and feminism being intertwined. I've been made to understand that many of these folks have been upping their already obsessive levels of harassment and making threats of showing up simply to harass people for holding the offensive belief that women have something to contribute as people and not just as sex objects. So I wanted to remind people not to let those bastards get you down. They don't speak for the majority. They exploit the anonymity of the internet to make themselves seem greater in number than they are, mainly by posting non-stop and having no life outside of being angry that feminists are engaged in secular activism. But as this story shows, the fuck-you-women-are-objects-n0t-people attitude is not inevitable, and conversations can actually be had and good faith does exist. So, a bit of optimism!

And come to Women in Secularism!