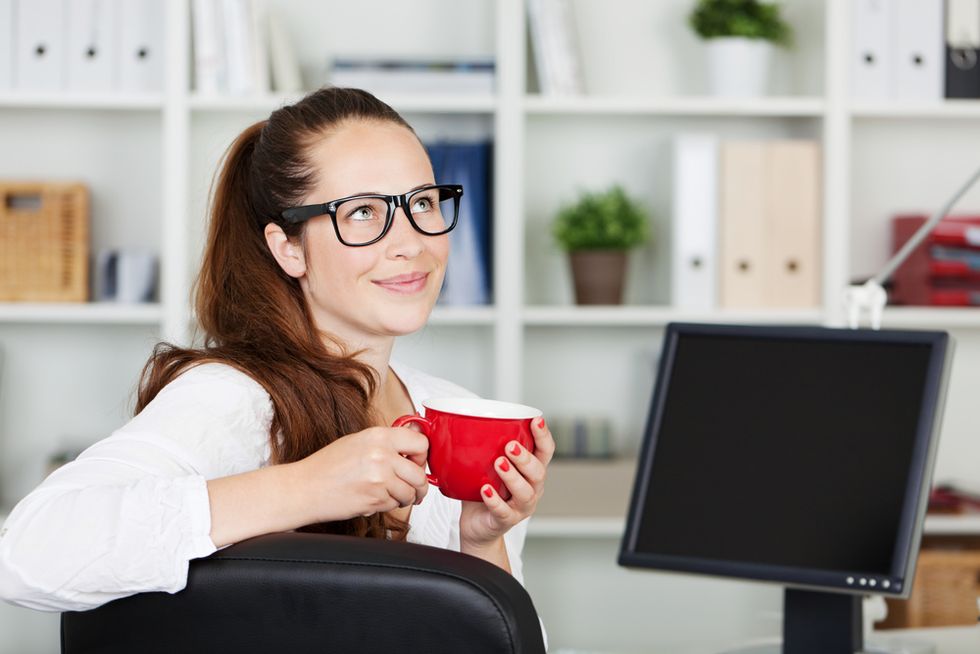 Being single and childless only works out in some professions.

"Mad Men" recap video will be either late tonight or early tomorrow. We have many thoughts, so stay tuned!

Here's an interesting study in contrasts that really shows how the intersection of class and gender really complicates feminism. This study of people that sound like they're largely in working class and managerial type professions got a lot of attention because it showed that fathers who take on more "women's" work like caring for children at home get penalized by their colleagues for it, usually with more harassment. But if you read the entire Science Daily summary, you'll find that it's both men and women in these types of jobs that face massive pressure to conform to traditional gender roles at home.

Women without children and mothers with non-traditional caregiving arrangements are treated worst of all.....

Overall, the studies found consequences for any employee who violated traditional gender roles when it came to having a family. The least harassed in the office? Fathers and mothers who followed more traditional gender norms; that is, men who did less caregiving and domestic tasks at home and women who did more.

Unsurprisingly, married men with children who were more traditional, i.e. more willing to foist unpaid domestic duties onto their wives, did the best of all. But what's interesting is that being childless can actually hurt you in these sorts of occupations, because things look very different for women who work in more upper middle class and professional occupations. There, it seems, rejecting traditional roles is not only good for your career, but in some cases, it's basically mandatory.

Mary Ann Mason, writing for Slate, covers how this works in academia. Female academics pay very steep penalties for having children and especially for embracing traditional gender roles in the home.

And women who do advance through the faculty ranks do so at a high price. They are far less likely to be married with children. We see more women in visible positions like presidents of Ivy League colleges, but we also see many more women who are married with children working in the growing base of part-time and adjunct faculty, the “second tier,” which is now the fastest growing sector of academia. Unfortunately, more women Ph.Ds. has meant more cheap labor. And this cheap labor threatens to displace the venerable tenure track system.

It's both husbands and children that hold women back:

In those cases, one body must defer to the other’s career and that body is far more likely to be the woman’s. Or their husband’s career, not in academia, limits their choices. As one biology graduate student in our study said, “My husband has a job he loves, but it will require that we don’t move: This limits my postdoc and career options significantly. I think the chances of staying in the same city throughout the career and finding a tenure track position are almost nonexistent. However, I am not sure I care any more.”

Then there is the job interview. One job candidate we interviewed said “ I also had the experience of being in an interview, mentioning my child, and seeing the SC’s [search committee head’s] face fall, and that was the end of the job. Although there could have been a million reasons, there is no doubt that having a child did not help my candidacy in that case.” Mothers are more likely to join the ranks of the second tier, or to drop out of academia.

For both the more ordinary working and middle class jobs and the academic jobs, being a married man with children who adhered to traditional gender roles was what you wanted to be: It means people take you more seriously, but since your wife does all the domestic labor, the family duties don't distract you from work.

It's women who have  a mess of divergent experiences. In some jobs, being single and childless is the best possible thing you can be if you're female, because you're perceived to have a killer combination of a responsible personality but no demands at home to tax your time. In other jobs, however, being single and childless is perceived as "weird" and can hurt you. In my experience, being single and childless in an administrative job means you have to take on more of the work so the mothers can leave early to pick up their kids, but doing that extra work often doesn't translate into more respect or more money. But being able to give more to your job in the more competitive professional world outweighs people's distrust of the single, childless woman for being "weird", and can help you climb the ladder.

I'm not of the camp that wants to beat up Sheryl Sandberg for writing a book for female professionals that really speaks just to them and not to anyone else. Still, this kind of divergence of experience for working women depending on your class and career path shows exactly why it's troubling that most of the attention to "work/life" issues for women focuses on those who are in elite professional occupations. Things look very different for women doing administrative work, service work, or any of the other jobs that are necessary but unglamorous. In those jobs, no one thinks twice about a woman who is working to take care of her family, and not because this career is her passion. In more elite jobs, having a family is enough in and of itself for your colleagues to wonder if you're passionate enough about the work, or if your loyalties are divided. Rethinking how to best address women's diverse needs in the workplace means that it's not enough to come up with a solution that works in elite professions like academia and executive offices, and just assume it translates. It clearly doesn't.

Of course, in all cases, being a traditional married man with kids is a winning combination. To change things for women, we probably need to start worrying about why that happens to be universally true, regardless of the job a man is doing.