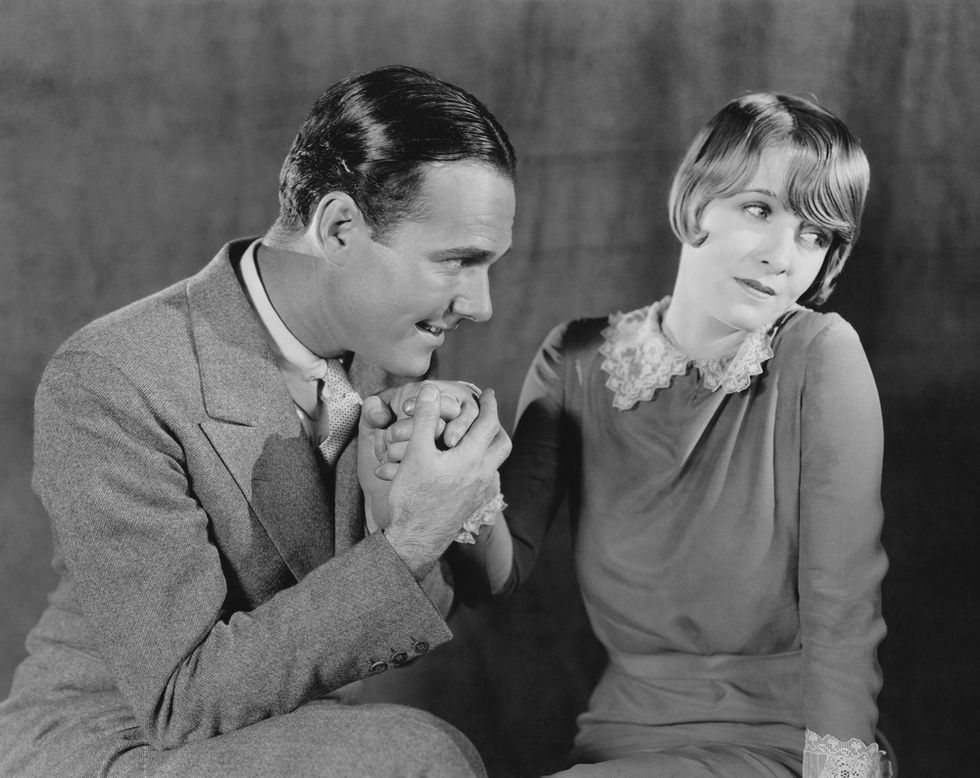 I've long said that men who insist, at length, that women simply are less horny than men and [fill in half-witted evo psych-sounding answer] is why, they're usually just trying to rationalize why women who hit the gym, watch their diet, do their hair every day, wear make-up, and shave extensive parts of their body then hesitate to share all that hard work with someone who combs his hair periodically and hits on women with the assumption that they owe him something. This especially includes the husbands who can barely conceal their rage at that they aren't getting the sex from their wives they feel entitled to under the woe-is-me-why-did-biology-make-women-hate-sex exterior. I will say this: At least some "pick-up artists" are willing to accept that women do, in fact, want sex, if they find the man attractive, even though they then still hate women for finding the "wrong" men attractive, "wrong" apparently being defined as "anyone who isn't me". Yes, some women have lower sex drives than their male partners (and vice versa), but this narrative is much more about a man trying to avoid thinking too hard about what he could change to make sex with him more appealing, by blaming women for being biologically inadequate because of [reasons].

But until today, I never considered that the men who whine about women's supposed brokenness in not wanting sex (with them, but they insist in general) more might actually know on some level they're full of shit. Because Ask Polly got this ridiculous and silly letter from a man who has what he believes is an ironclad argument for why he's entitled to cheat on his wife. Trigger warning for overwrought, annoying prose from this sample I'm sharing:

Here are the supporting facts:

1. My wife is no longer interested in sex. She is too busy and tired from stressing over the kids and delivering our little royals to their next playdate to generate biological feelings for me. Before the children were born we had a "zestful" sexual relationship but no longer.

2. It is said men in general have a much higher sex drive. I am a man and find this to be a considerably large understatement, along the lines of saying Transformers might be a shitty movie.

3. I find my wife sexy; I also find other women sexy. Some of these women will have sex with me and we will enjoy it.

4. Having sex with other women will relieve much of the emotional resentment I have against my wife for her sexual indifference (even though I empathize with her), and we will have a better emotional relationship as a lack of sex will no longer be a source of conflict.

5. I will feel physically better if I have sex with other women because I will be released from the buzzing, thrumming miasma of lust that plagues me every moment during a sexless week. Believe me, most men are familiar with these feelings.

6. My wife is an outstanding mother, and otherwise a good wife and best friend.

And so on and blah blah. Polly puts him in his place, suggesting that it's interesting that he has enough free time to do the heavy lifting required to meet women, talk them into bed, make arrangements so that his wife doesn't find out, etc., but his wife is so insanely busy with her child-rearing duties she can't even find the time to have a quickie with him. And you know, maybe he should fix that by, say, not making his wife do all the child-rearing. I can't really do just to the spanking she gives him, so read the whole thing for bon mots like, "I suggest you spend more time with your kids, and also more time thinking about what's best for them, so the burden of stress doesn't always rest on your wife. Find out how you can do more around the house so your wife is less sick of seeing your fat face, begging for a tuggy."

But here's what's interesting to me. This guy claims to simultaneously believe:

So there you go. This guy clearly knows women feel sexual desire, and that it's also possible for his wife to feel it. However, he wants her to do all the housework so he has the free time to pursue affairs, and the "women are biologically incapable of feeling true lust" theory is simply a crutch he leans on to justify being a really horrible person. Now that my eyes are open, I'll be listening more carefully to men who make outlandish claims about how "females" are "hardwired" to be sexless drones, compared to admirably lusty men who are tortured by their desires for these undeserving joyless prigs that are women.