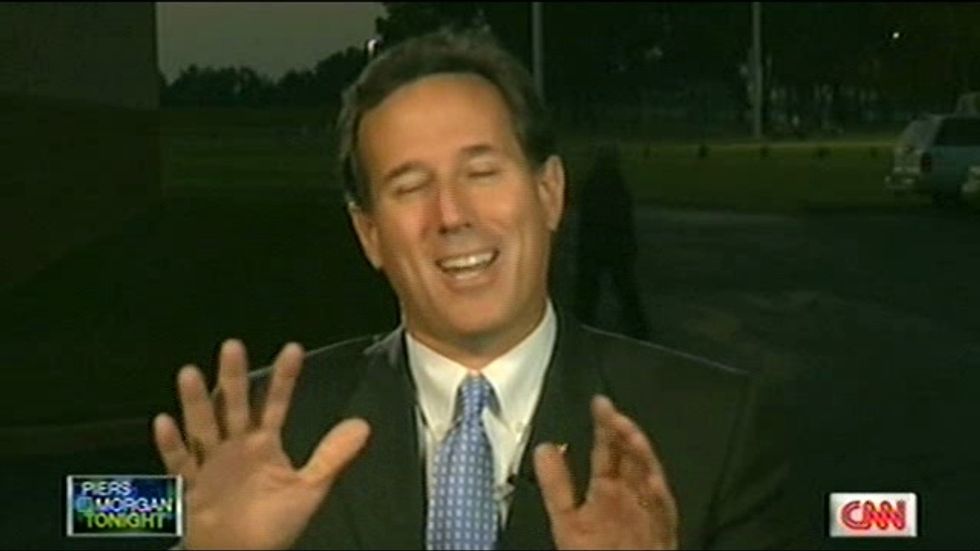 I think one of my all time favorite rhetorical tics of conservative politicians is trying to convey crap they picked up in Christian right propaganda mills without really spelling out what they're talking about or where they got it---for fear of the media following up, no doubt---and inevitably coughing up something that causes observers to scratch their heads and ask what the fuck they're talking about. (Todd Akin's "legitimate rape" comments being a perfect example: It took thousands of words from multiple journalists digging around in his past to finally explicate what the hell he was stabbing at.) Rick Santorum coughed up a real gem in this genre the other day, where he accused---at a Students for Life event, no less---the pro-choice side of being obsessed. To be fair, he sees this as a virtue, but it's also utterly laughable to think that right wingers suffer from a lack of obsession with women are having unauthorized sex.

But what's hilarious about this is that he coughs up some garbled, unintelligible nonsense about showers:

Which had the unfortunate effect of making it sound like anti-choicers had to avoid showers that were contaminated with pro-choicers for fear of catching abortion cooties. Which is made all the more awesome if you remember, as I do, that Santorum's wife not only dated an abortion provider for years before dating Santorum, but only left her previous boyfriend with great reluctance because he didn't want to have kids. Feel free to speculate about how marrying a woman who settled for you because she couldn't get what she wanted from an abortion provider might fuel Rick Santorum's obsession with hating abortion and thus the people who provide them. If nothing else, you can see why a belief in abortion cooties might develop.

But actually, there's a story here, and a helpful anti-choicer, who clearly didn't get that I'm actually well-versed in how these kinds of legends develop on the right, pointed me to what the fuck Santorum was talking about. Seems Students for Life is running around claiming they are so oppressed by the YMCA---which stands for, for those who are too dim to grasp the implications here, the Young Men's Christian Association---for their Christian, anti-abortion beliefs that they were barred from using the showers there in Austin. Here's their version of the story:

Pro-life students who traveled to Texas during the recent abortion debate in Austin were booted from a YMCA there when pro-abortion customers complained.

The 56 students, part of the Students for Life organization, were using the YMCA to take showers at night.

Students for Life spokesperson Alexa Coombs says YMCA reported to the student group that pro-abortion supporters had confronted staff about the students, and the staff felt threatened by the complaints.

“And they asked us not to return because the staff was pretty much bullied into denying us showers,” she tells OneNewsNow.

Word got out, and the YMCA was inundated with calls, creating a public relations nightmare.

“And they put out a press release pretty much blaming us, saying that we were creating a disruptive atmosphere and engaging in political debate, and that couldn't be further from the truth,” says Coombs. “Our students were very quiet, non-confrontational. I don't even think that they talked to anybody there.”

Of course, these are people who claim that yelling at women trying to get into abortion clinics is "counseling", putting their honesty into question immediately. As anyone who knows the Christian right can attest, it's really, really common for them to run around being aggressive, harassing and provocative, and when they are held accountable, to preen about how they're being oppressed for their faith and isn't this a free country and wah wah wah? One reason they do this is because they believe that's what liberals do---that we routinely make up claims of sexism and racism so that we get our sexism/racism checks in the mail or something---and that justifies this blatantly dishonest behavior in their minds. It's super ugly, and one reason that one should be wary of the "both sides" mentality in the media, because the behaviors in this case are absolutely not parallel. That's why, when I read this, I immediately thought that what likely happened was that they went into the showers and started proselytizing, and when people understandably argued with them or asked them to take it elsewhere, they responded in an ugly fashion. We are, after all, talking about high school and college age conservatives---think James O'Keefe during his pimp videos and plotting to kidnap journalists days---so not exactly the most evenly tempered crowd.

The YMCA's response to the claims that they're out to get right wing Christians, after all, tells a very different story:

As a volunteer-led nonprofit organization, it is not our intention to inject ourselves into this issue, nor do we take a position on this issue.

We strive to create an atmosphere that is welcoming to all, where people of all backgrounds are comfortable.

That’s what we were striving to do in accommodating the Students for Life group who were in need of a place to shower.

Unfortunately, in this instance, it caused the political debate to come into the Y.

If any person or group enters our facilities and creates an atmosphere that is disruptive, we have an obligation to our members and program participants to ask that person or group to leave or to refuse them access.

There are appropriate places in which to conduct a political debate, and that place is down the street at the State Capitol, not at our YMCA.

It seems unlikely that the Y didn't know that they were an anti-choice group, so the claim that this is what it's about doesn't hold water. Instead, it seems more like the Y, who I may remind you believes their mission is to "put Christian Principles into practice", simply believed that the admission price to use the showers should be that Students for Life not use their facilities to try to provoke debate over the issue of abortion rights. It seems that if the anti-choicers could have shown up and taken a shower without picking fights over this, it probably would have been just fine. Instead, Santorum is basically telling them that they need to be more aggressive about picking fights in inappropriate situations, because---he claims---the other side is doing it. That we are not---personally speaking, I have been in many a gym and community center in my life and so far have started zero fights over abortion rights in that time---doesn't matter. It's the pretext to do what they wanted to do anyway, which is pick fights and then preen like they're victims when they're held accountable for it.