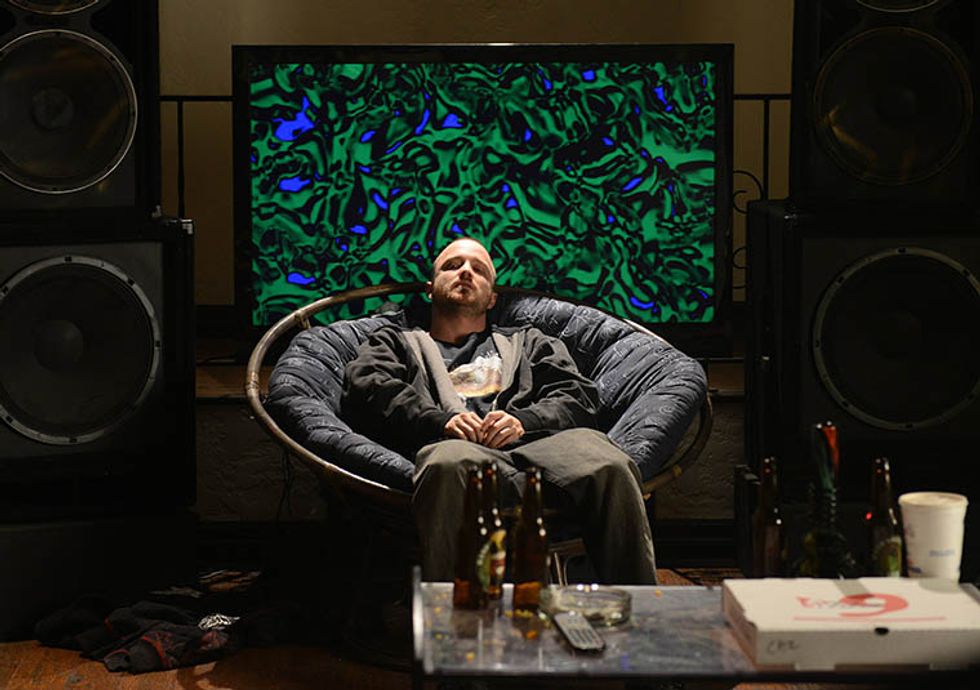 For reasons of time and availability, the Orange Couch has decided we're not going to be able to recap the last eight episodes of Breaking Bad, but that doesn't mean we can't still rehash last night's episode. And what an episode it was. No giant magnets or death-defying train robberies, but just a toe-to-toe confrontation between Hank and Walt, but personally I felt that it was all the more dramatic. This was Breaking Bad embracing what really makes it tick, which is Walt trying to manage his own internal view of himself as the Big Man In Charge vs. the actual realities of his life. I've long found Walt's inability to see Hank for who Hank truly is one of the most fascinating parts of his character, a distillation of the superiority complex that underlies most of Walt's bad decisions. Needless to say, a lesser show would have drawn out that confrontation for half the season; putting it in the first episode shows confidence that there's a lot of story to tell and there's no need for any kind of artificial ramping up of tension.

While the examination of changing definitions of masculinity is an inspiration for a lot of shows across various genres, Breaking Bad continues to be one of the most unflinchingly honest in its portrayal of toxic masculinity, even as the show has otherwise gotten gleefully cartoonish (which I like) in its ever-weirder plot developments. Breaking Bad has always been, at its core, a show about a nerd who has uncritically absorbed the most toxic cultural messages about masculinity. Traditionally, nerdy men are seen as the dissenters from the rigid definition of masculinity as violent, controlling, dominant, and egotistical. But on Breaking Bad, the Ed Hardy-sporting stoner and the gruff cop characters are actually the ones who have space in their hearts for the "weak" and "feminine" emotions like compassion and who relinquish the illusion that they are entitled to control everything and everyone around them. It's Walt who thinks that his "right" to control other people gives him license to lie and commit acts of violence. The geek, in Breaking Bad, is the repository of all the worst aspects of a patriarchal culture.

Is it a coincidence that Walt likes to wear a goofy-looking porkpie hat? In the years since Breaking Bad first aired, there's been a dramatic increase in tension in geeky spaces over the question of what to do with men in the community who suffer from the same problems that the fictional character of Walter White does, especially in terms of feeling like their status as men entitles them to be controlling and domineering without facing any consequences for it. Sure, they don't express those attitudes by running ever-expanding drug cartels and murdering people to keep them quiet, but they do think they're entitled to harass women and imperiously dismiss anyone who challenges cultural norms that cast men as actors and women as objects. Walt is a cartoonish exaggeration of something that happens in the real world: The angry nerd who chaffs under the way that he believes society overlooks the Real Man that he believes himself to be, who, given the opportunity to act out his ugliest power fantasies, revels at the opportunity. All credit to Vince Gilligan and his writers, particularly the way they capture the massive gulf between how the angry nerd acting out sees himself (as kicking ass and taking names) and how the people around him perceive him (repulsive).

That's why the confrontation scene between Walt and Hank last night was so epic. It's abundantly clear that Walt isn't giving up his delusion that he's some kind of Randian superhero who gets to manipulate and abuse everyone else, who he perceives as peons unworthy of respect. He briefly manipulates Hank into sympathizing with him because of the cancer, but as soon as Walt realizes that Hank isn't going to simply bend to his will---because Hank offers to talk it over and come to an agreement, whereas Walt just simply believes people should do what he tells them to do---Walt suddenly changes course. The only acceptable solution for Walt is for everyone else to just do exactly what Walt wants them to do. The illusion of control has not gone away, even as Walt has been affecting the appearance of a man who has changed and wants to settle into a more mundane life.