Misogynist Trolls Have An Agenda, And It's Not Lulz 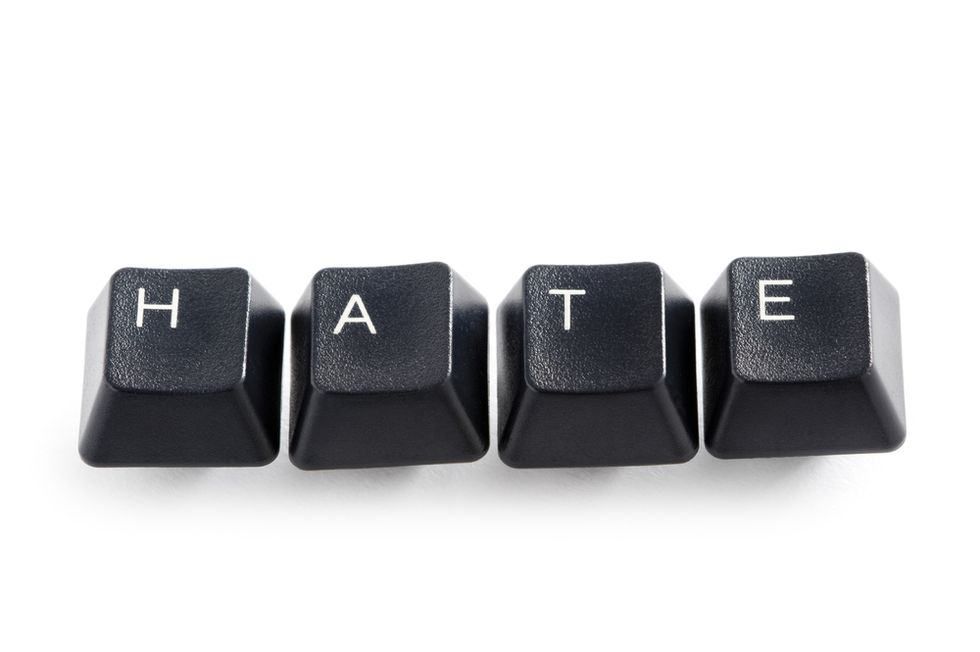 The Twitter harassment campaign directed at women who had the nerve---the nerve!---to support putting a nobody like Jane Austen on the ten pound note has opened up another round of discourse about what to do about the trolls. I think this time it's been particularly helpful, because losing your shit and deciding to threaten to rape women over one of the most important novelists of all time receiving an honor due her is so utterly and undeniably misogynist that it basically sails right past one of the most sticking problems feminist face when discussing misogyny: The people who believe that all other possible options, no matter how ridiculous, must be exhausted before we can firmly declare someone's motivations to be misogynist. ("I wouldn't say it's sexist," the concerned man explains to the exhausted feminist who is dealing with the umpteenth straggly-haired fuckwit defending sexual harassment she's seen this week, "Perhaps he's a space alien and in his culture, having someone grab their balls and waggle their tongue at you is considered polite flirtation.")

I'd like to recommend a couple of interesting pieces by Paul Mason and Lindy West, who have a point that I think bears stressing: Trolls are real people and they have an agenda outside of some vague "need for attention". They are misogynists, and as I said during the CONvergence panel on this subject, it's important to understand that misogynists believe they are in the right. Indeed, they are incredibly dogged and self-righteous, as Mason found out when he first decided to explore online misogyny---they get really mad when you do this, by the way, because part of their self-righteous worldview includes a belief that they should be able to push their agenda without being examined or questioned too closely.

Since I've been on the trail of the people threatening high-profile women with rape on Twitter I've learned a lot. I get a fair amount of grief on social media, usually from the kind of people who get driven to using the F-word about Keynesianism, or the Laffer curve.

Now my timeline's been flooded with abuse - and its alter ego, gentle condescension laden with malice - from all kinds of trolls, griefers and flamers (the latter, one of the trolls explained, are not serious, adding that it is they, the trolls, who are the kings when it comes to ruining people's lives online).

Of course, Mason interviews the guys who claim they're just in it for the "lulz" and discovers to no one's great surprise that actually, these trolls have deep hatred and resentment of women and actually do take the mission to silence women very, very seriously. They just can't quite admit that to themselves, because part of the identity of the misogynist is to deny that he is a misogynist---he loves women as long as they know they are subhuman sex/reproduction appliances put here to serve, so how can he hate women?!---so the amount of rationalization that goes on is astounding.

But as awful as trolls are, they do serve a major purpose, if people are willing to accept that these are actual people expressing actual opinions, instead of imagining them, as too many people do, as almost a force of nature that the internet willed into existence and not people at all. That purpose is revealing that misogyny exists and it is widespread. Understanding that, I think, makes clear why so many other things exist: Rape culture, fundamentalist religions, the Republican Party's guns-and-abortion obsession. There is a sea of boiling anger out there because men are taught from a young age that women are here to serve, and then they grow up and discover that women often elect not to do that. Some misogynists---the Rick Perrys of the world---calmly react to this realization by deciding that women's rebellion is a temporary, feminism-induced insanity, and that the proper legislative pressure plus a good dose of condescension can return them to their natural state of servitude. Some men get a sick pleasure out of stripping away the "illusion" that women are equal and violently showing them exactly how inferior they are. The online troll population has these kinds of characters in it, but the dominant class is men who don't get the level of sexual attention they feel entitled to from women, and therefore have concocted elaborate, dogged theories about how women are broken, because they cannot ever allow that women have a right not to like them personally. (Or that if they started acting like decent people, maybe they would actually be more likeable.) All misogynists get upset when women are given attention for their talent or skills; it violates their core belief that women are here to serve. This is why writing on the internet while female means getting everything from laughably delusional men pretending to "critique" your writing while barely concealing their rage to rape and death threats. Particularly if your writing is not upholding the opinion that women are inferior servant class.

Of course, to avoid the inevitable whining, it must be pointed out that lots of men are not misogynists at all, and do actually believe women are full human beings whose right to live freely should go unquestioned. And a lot of men absorbed some lessons about female inferiority and some lessons about female equality and are trying to figure shit out. These men are not who I'm writing about. I am writing about misogynists, and trying to drive home the point that they are numerous. But by no means are they all men.

The seething rage on display from so many men (and their female supporters) all the time on the internet is educational; it makes it much harder to hand wave and pretend that rape and sexual harassment are a matter of miscommunication, that anti-choice sentiment is a result of some kind of affection for "life", and that women's failure to reach economic and social equality is a matter of women's failures instead of widespread sentiment that women don't deserve said equality. Seeing the livid rage of devoted Republican voters at the very existence of independent women sharing their thoughts and opinions online makes it very difficult indeed to see Republican policies that hurt women as being merely coincidental. So this shit matters.

That's why it's uncomfortable to have so many people insist that there's an easy fix for troll targets, the "ignore the bullies and they'll go away" fix, usually spouted by people who haven't considered for a moment that the trolls may very well be actual people who are trying to protect and perpetuate sexism. West is skeptical of the ignore-the-trolls strategy:

In other words, when we ignore the issue—leaving trolls to twist in the wind—not only does it not fix anything, it actively hurts us. It poisons healthy conversations. And, more specifically, it actively drives women off the internet and out of the conversation and back into our "safe spaces"—which is exactly what the trolls want. They want us to shut up. They want us out of their territory.

Trolls want to silence women. When they are allowed to shout at you without a response, they have created a microcosm of the world they want, where men are yelling at women who are sitting there and taking it. This is an interesting point, though as West points out, trolls also "win" when they get attention---particularly with the "women won't fuck me like I deserve!" anger mobs, getting negative attention from women becomes a sort of revenge for them. So it's tough, but like sexual harassers, trolls know how to create a situation where you can't win: Either you endure their harassment or you are a "bitch" for pushing back. Cultural misogyny works in their favor.

I would argue that people who are dogmatic on the "ignore the trolls" front---who are far disproportionately men, in my experience---have ulterior motives a lot of the time. Not that they support misogyny! On the contrary, I think misogyny makes a lot of men uncomfortable, and so they try to fix their discomfort by pressuring women being attacked by trolls to conceal what's happening. From Mason's piece:

Stella Creasy MP and Caroline Criado-Perez have been targeted now for days, together with other high profile women. They've been criticised for re-tweeting the abuse, instead of the strategy of ignore and block. Ms Norton says:

I retweet trolls a lot (and then usually block them immediately, because I know that there is no potential for actual discourse here). I get a lot of shit for it, mostly from men. Every time a man condescendingly tells me, "You are giving them attention! Just ignore and block them!", I hear, "Being exposed to the brutal misogyny you get aimed at you every day is uncomfortable. It would be so much better for me if I didn't have to know this is what's going on." This phenomenon is not unique to the internet. Kids who get bullied get "don't be a tattletale" from adults. Women who get street harassed end up having to apologize for making men in their lives uncomfortable by bringing it up. The intention is almost never to tell someone they are to suffer this in silence, but the effect is that you are telling them just that.

West is right; it's time to stop thinking of trolls as idiots who are just seeking attention, and see them for what they are: Misogynists with a political agenda. These are men that absolutely do not want to live in a society where women are treated equally, and they are obsessed with silencing the women online whose writings they rightfully fear are going to help push society in a more feminist direction. They want to harass feminists into silence. If we keep this understanding front and center and discard useless theories about "attention-seeking" or "lulz", we can begin to have a more productive conversation about what the hell to do about the problem.