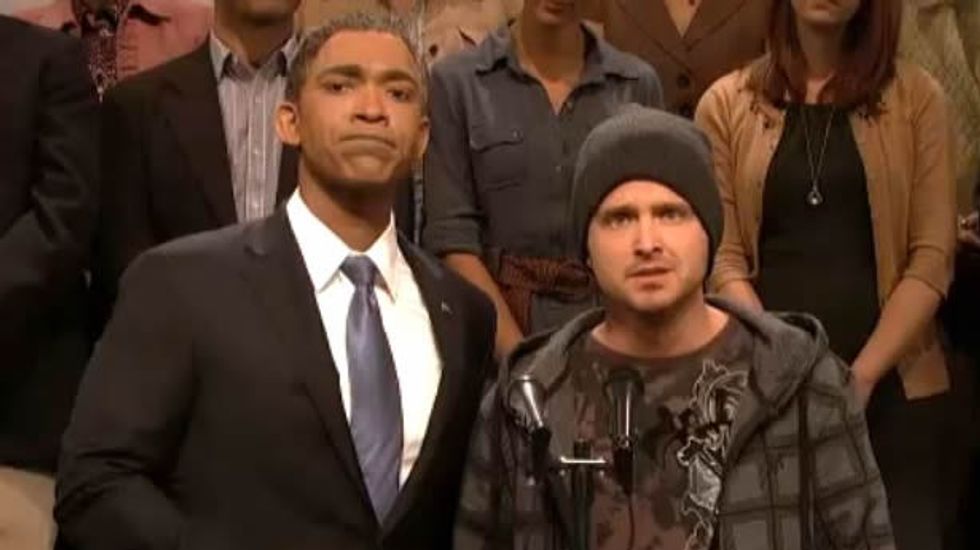 The cold open of last night's Saturday Night Live featured "President Obama speaking in support of the Affordable Care Act." The skit consisted of the president bringing "ordinary Americans" onstage to tell the crowd how Obamacare will effect their lives.

The first speaker, a woman, said that she's "psyched for Obamacare" because now she "can get sick all the time, with free medicine, y'all!"

Next, the president introduced a father and son to speak about the benefits of allowing children to stay on their parents' insurance until the age of twenty-six. "We used to tell our son that he'd have to get a job to get healthcare," the father said. "But thanks to Mr. Obama here, our son will never have to lift a finger to get insurance."

After security escorted the pair off-stage, "Ted Cruz" appeared to say "something serious" about healthcare. "I do not like it in a box, I do not like you with a fox," he said. "I speak for the trees, who cannot speak for themselves. But if they could, they'd say 'Shut down the federal government!'"

The president then introduced "a man from New Mexico with a heartbreaking story about healthcare before the Affordable Care Act," at which point Aaron Paul, who plays Jesse Pinkman on AMC's Breaking Bad, took to the podium.

"Hey, what's up. I have this friend, you know, and he got sick. Cancer sick," he said, referring to Walter White on Breaking Bad. "But because there wasn't Obamacare, he couldn't afford the treatment. So he was, like, backed into a corner."

"And keep in mind," Obama interrupted, "that this man was a teacher, a man with a family."

"He was," Paul said. "So, he did what any of us would've done: he started cooking meth. And soon it wasn't just meth, it was murder. And not regular murder, you know, he blew half a guy's face off."

"I think we can wrap this up," the president said. As Paul was being escorted off stage, he asked, "Wait, you don't want to know what happened to my friend?"

"No!" was the emphatic response from those on stage and in the audience.

The series of finale of Breaking Bad airs tonight on AMC.

Watch the Saturday Night Live skit in its entirety below: