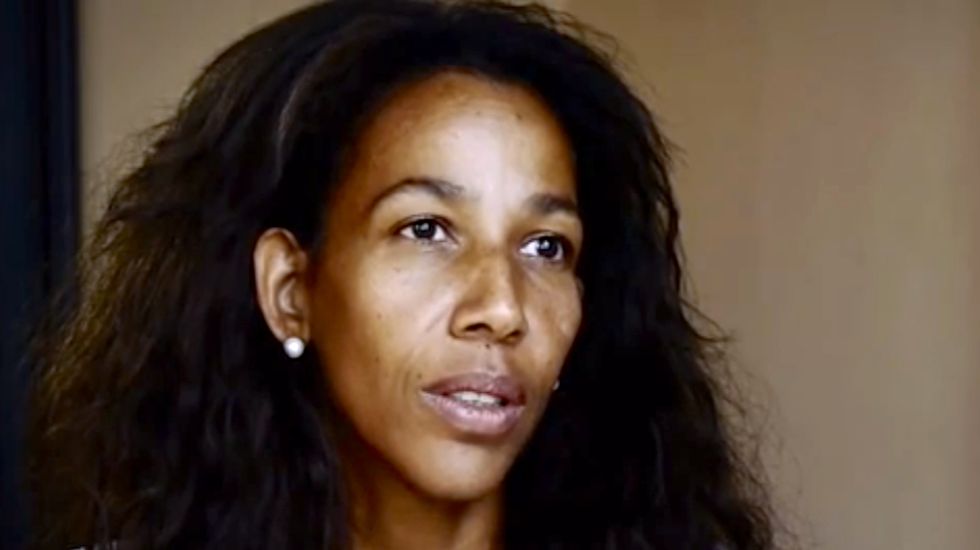 A steel-eyed Nazi killer picks off Jewish prisoners with a rifle from a balcony in a concentration camp in 1944.

More than six decades later, a Nigerian-German woman who has studied in Israel thumbs through a book about the sniper and is shocked to learn the man is her own grandfather.

In a memoir published this month with the chilling title "Amon: My Grandfather Would Have Shot Me", Jennifer Teege recounts her dark family secret and the extraordinary story of how her own life became enmeshed with one of history's grimmest chapters.

Teege is the child of a Nigerian student and the German daughter of Amon Goeth, the commandant of the Plaszow concentration camp outside Krakow in today's Poland who featured in Steven Spielberg's 1993 Holocaust drama "Schindler's List".

The 43-year-old Teege learned only by chance five years ago that her grandfather was the sadist known as the "Butcher of Plaszow", who was hanged in 1946 for the torture and murder of thousands of victims.

Teege's parents had only a brief affair and gave her away to a children's home weeks after her birth. She was placed with a foster family and eventually adopted by a well-off couple in a Munich suburb when she was seven, seeing her biological mother only sporadically.

Half a lifetime later, looking through the stacks of her local library in the northern city of Hamburg, she stumbled upon a title that resonated with her own fractured personal history: "Ich muss doch meinen Vater lieben, oder?" (I Have to Love My Father, Right?).

The middle-aged woman pictured on the book's sleeve looked faintly familiar and a quick scan of the biographical details revealed a perfect match with those of her birth mother.

"It was like the carpet was ripped out beneath my feet," Teege told AFP.

"I had to go lie down on a bench. I called my husband and told him I couldn't drive and needed to be picked up. Then I said to my family that I did not want to be disturbed, went to bed and read the book cover to cover."

In one of the most harrowing scenes of Spielberg's film, Goeth as played by Ralph Fiennes begins shooting Jewish captives for sport from the balcony of his camp villa before letting his dogs rip them limb from limb.

Teege said she had seen "Schindler's List" while living as a student in Israel but was uncertain how true-to-life its portrayal of Goeth was.

"And I drew no connection with my own life. Even though my birth name is Goeth, it wasn't written out on the screen so when I heard it in the film it didn't even occur to me that there could be a link."

A picture of Goeth above the bed

Even after her parents gave her up, Teege had fond memories of her grandmother Ruth's occasional visits and cards on her birthday.

"As an abandoned child, she was a very important person in my life," she said.

Teege was shattered to learn later that this kindly woman had lived for a time with Goeth as his lover in the same camp villa from which he savagely murdered prisoners.

They met while she was working as a secretary for Schindler in Krakow. Their daughter Monika was born in 1945.

Ruth took Goeth's name shortly after his execution and, denying his crimes to the end, still had a picture of him hanging above her bed when she committed suicide in 1983.

An advertising copywriter and mother of two, Teege exudes a warmth that belies her bloodline.

Her book, co-written with journalist Nikola Sellmair, features a portrait of the light-skinned black Teege gazing out from the cover.

The title refers to her realisation that her own grandfather would have seen her as subhuman like the Jews he slaughtered.

Teege herself has visited the Schindler museum in Krakow, the Goeth villa at Plaszow and laid flowers for his victims at the camp memorial.

Although she and her mother are estranged, she says she can understand why the terrible secrets were kept from her, noting that the second generation of Germans after the Nazis had a very different burden to bear than the third.

"My mother was absolutely unable to cope with her own history. And she wanted to protect me by keeping me in the dark about it," she said.

"Once I learned about my family's past, I had to make a conscious decision to live in the here and now."

Teege said she aimed by means of the book to work through the horror and depression that her family tree inspired, but also to ask more universal questions about how to deal with the weight of the past on the present.

"Of course my story is gripping and original," she said.

"But it's also more generally about the fact that it's possible to move beyond repression to gain a kind of personal freedom from the past by finding out who you really are."

Teege said her middle-class upbringing had largely shielded her from racism in today's Germany.

Now, after wrestling with her mother's heritage for so long, she is ready to begin exploring her paternal African roots.

"I'm looking forward to learning more about my other side."